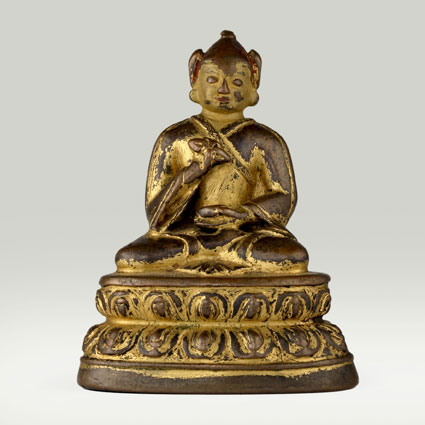 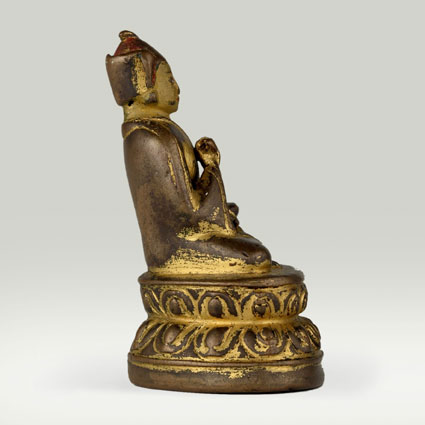 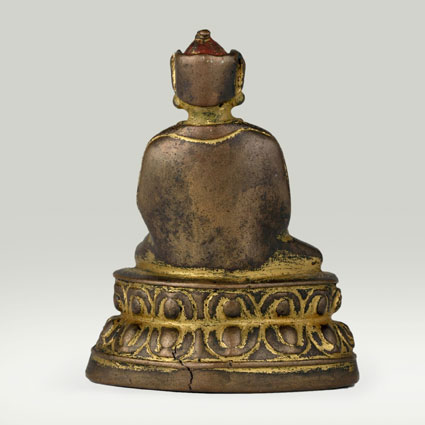 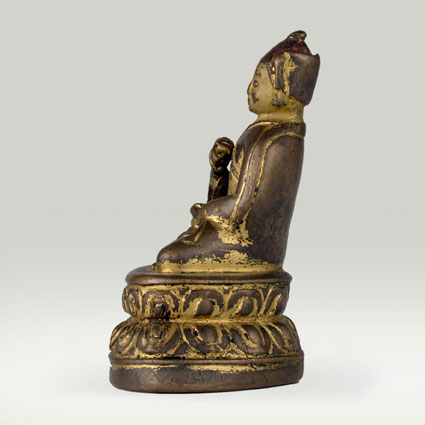 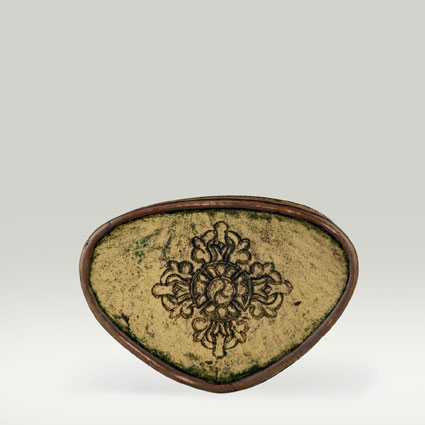 Padmasambhava (the lotus-born) can be understood both as a great tantric master and as an immortal deity. Depending on the version and episode of his astonishing biography, he bears many different names. Often he is called Guru Rimpoche (Precious Master) or the "second Buddha". His eyes are wide open, to show that he dwells in absolute and indivisible truth. His crown in the shape of a five-petalled lotus bears testimony to the fact that he belongs to the lotus family and thus to Amitabha, whose manifestation he is. In his right hand he holds a vajra with the threatening gesture to show that he subjugates negative forces. A skull bowl full of nectar of immortality rests in his left hand to testify that he has reached a state beyond death.
His birth a few years after the death of Buddha Shakyamuni in the 5th century BCE was, according to tradition, supernatural, for he appeared as an eight-year-old boy from a lotus blossom. The only historical reference to his earthly life however, is the account that he was invited to Tibet by King Trisong Detsen in the second half of the 8th century (i.e. more than 1,000 years later) on the advice of the abbot of Zahor (Shantarakshita).
They requested him to subdue the negative forces that opposed the establishment of the Buddha's teaching. Even on the way there, he vanquished many hostile powers and converted them into protectors of the teaching. Thus he enabled the construction of Samye Monastery (the first monastery in Tibet), the ground plan of which represents the universe. Therefore he occupies a very important place in the Kagyu and the Nyingmapa lineages.
Ultimately, he left Tibet to retire to a mystical realm (Chamara), where he is said to reside even today. His mantra: Om Ah Hum Vajra Guru Padma Siddhi Hum is believed to strengthen wisdom, compassion and healing.