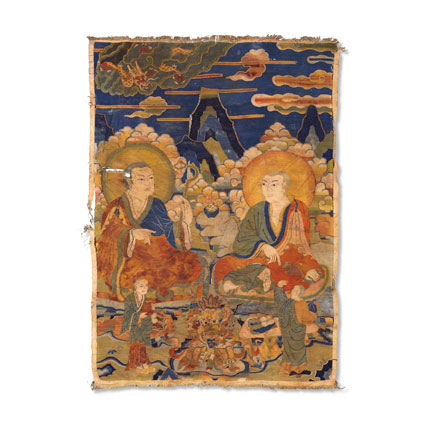 See it in the Museum
Chapel
Orientation 1
Wall object 6

This tapestry represents two unidentified Arhats (sanskrit), in Chinese known as Lohan. The word "arahan"literally means "worthy one”. The term was used as an epithet of the Buddha himself as well as of his enlightened disciples, since they strove to be free from all disturbing emotions like greed, hatred, and delusion, in order to see the reality as it is.

This silk tapestry was made using the Chinese kesi technique.  "Kesi" means "cut silk", because short lengths of weft thread are tucked into the warp threads.
It is admired for its clarity of pattern. This art form flourished especially between the eleventh and thirteenth centuries. During the Song dynasty, the art of the "kesi" reached its height. Under the Ming dynasty it was used to copy paintings.