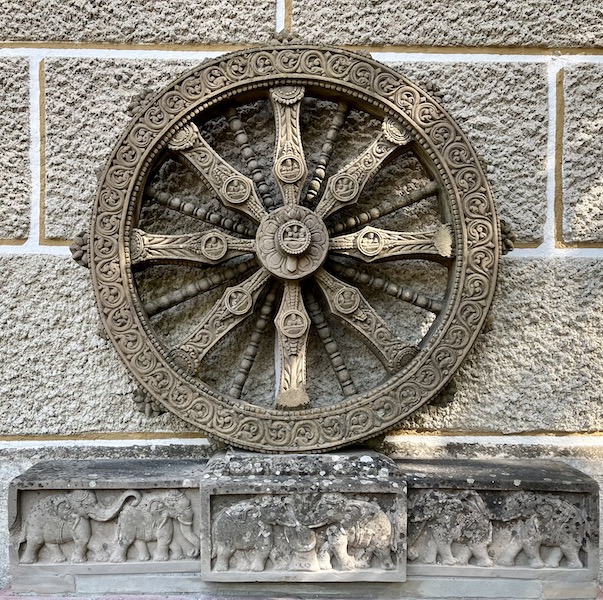 See it in the Museum
Outside
Orientation 2
Wall object 2 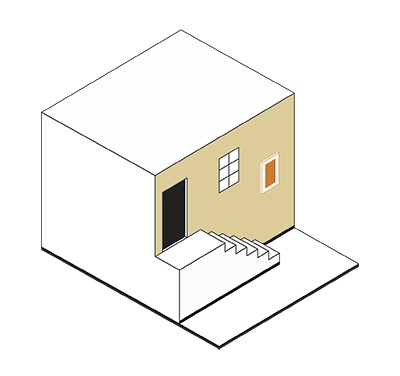 Description
Surya Chakra – The Wheel of the Sun

The wheel on display outside the Tibet Museum is an exact replica of one of the Sun Wheels (Suryachakra) of the Sun Temple at Konarak in the east-Indian state of Odisha. This temple dating from the mid-13th century is also called the "Black Pagoda" and is one of the most renowned archaeological sites in India. The sides of the temple platform feature the chariot of the sun god Surya drawn by a team of seven horses, which evokes his daily journey through the heavens.
The twelve pairs of finely carved wheels of the chariot are more than three meters high. Each wheel has eight spokes meeting in a finely sculptured hub. The hubs are decorated with a deity, a scene out of everyday life, or an erotic image. This sculptural theme is associated with tantric practices. The bas-relief is composed of elephants, an animal widely used for its beauty in Indian statuary, along with lions and horses.

In Buddhism on the other hand, the wheel is found as the Dharmachakra, the Wheel of the Law, which is one of the main symbols in all Buddhist traditions – in Theravada as well as Mahayana (Vajrayana). It commemorates the first sermon Buddha Shakyamuni delivered after his enlightenment in the deer park at Sarnath. The wheel stands for Buddha's teaching and thus for Buddhist doctrine. With its continuous clockwise rotation, the wheel represents not only the uninterrupted practice of the teachings of the Good Law, but also its dissemination in all the directions of the universe. The wheel is therefore the graphic representation of the Buddhist teachings leading all beings on the path to enlightenment. The Dharmachakra is represented as a chariot wheel with eight or more spokes. The eight spokes also stand for the "Noble Eightfold Path".