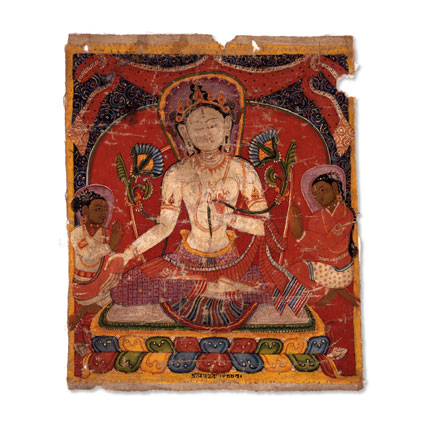 This thangka or phauba represents the only known painting which can be attributed to the Khasiya Malla rulers of western Nepal. The painting style reveals strong similarities with work originating from the Kathmandu Valley, a characteristic which applies also to the metal statues. There is clear evidence, that Newar artist of the Kathmandu Valley had worked for the Khasiya patrons. This painting obviously records an actualpuja of an image of the white Tara. It might well date from circa 1312 AD, when Ripumalla, together with his son Samgramamalla, was on pilgrimage and had visited, among other places, Lumbini in the Nepalese Terai, as indicated by the graffito written on the Asoka pillar.