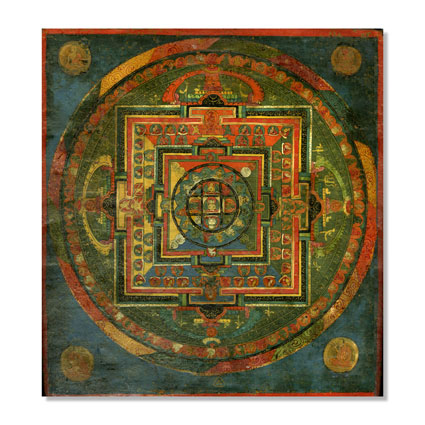 Description
Mythology
Iconography
Sarvavid Vairocana Mandala
Initiationsmandala auf Holz, gewidmet dem vierköpfigen weissen Vairocana des Charya-Tantras. Wir erkennen die Hauptgottheiten im Zentrum des himmlischen Palastes, umgeben von dhyanibuddhas, praktizierenden Yogis, Bodhisattvas, Buddhas, Mönchen und Schutzgottheiten. Innerhalb des fünffarbigen Weisheitsfeuerkranzes und dem Vajrawall ein Lotoskreis mit einer Gottheit in jedem Lotosblatt. In den Bildecken Rundmedaillons mit Buddha Shakyamuni und Amitayus bzw. mit einem Dharma lehrenden Mönch und einem Lama. der ein Reismandala darbingt.
The Five Buddha Families
The essential nature of a bodhisattva or a buddha is that he or she embraces the enlightened qualities of the five buddha families, which pervade every living being without exception, including ourselves.
To achieve the realization of these five buddha families or the five dhyana buddhas, it is necessary to abandon the five disturbing emotions of great attachment, anger or aggression, ignorance or bewilderment, pride and envy. When these disturbing emotions are purified and removed, the five wisdoms shine forth. Realization of the five wisdoms is realization of the five dhyana buddhas. To begin with, we have to understand what the five disturbing emotions (Skt. kleshas) are.

1. The first, which seems to be most powerful, is anger. Anger is an emotion which arises and develops against someone or something one dislikes. If examined carefully, in the short run anger creates pain and in the long run it brings about serious harm. The immediate pain and future harm is to oneself as well as to others is due to the power of one’s own aggression. We therefore need to understand the first negative emotion. The negative emotion of anger causes temporary suffering for oneself and others for this lifetime. This emotion is so powerful that all negative actions or karma accumulated by wishing harm to others can lead one to take rebirth in the lower realms. For example, intense anger can cause rebirth in the lowest hell realm where there is intense suffering. Therefore anger not only causes suffering and pain in this lifetime, but also causes us to take birth in the lower realms, where even more intense suffering ensues as a result. To be free of the experience of suffering and pain in this lifetime and to be free of the experience of taking birth in a lower realm, it is necessary to employ methods to overcome and eliminate anger and hatred.
When anger is purified and removed, we come to develop and to gradually realize mirror-like wisdom. With mirror-like The Five Buddha Families and the Eight Consciousnesses wisdom, there is no distinction between self and others, there is no separation between self and other phenomena so everything is experienced in unity and harmony. It is called mirror-like wisdom because phenomena appear to the mind in the same way that things appear in a clean mirror, completely accurate with no distortion. Understanding and realizing mirror-like wisdom takes place in the absence of the negative emotion of anger. Realization of mirror-like wisdom is realization of Buddha Akshobhya, who is blue in color. He holds a vajra in his left hand. His activity is pacifying the emotions, in particular, suffering, illness, frustration, and sorrow.

3. The third dhyana Buddha represents the purification and elimination of the disturbing emotion of attachment or desire. Desire causes much suffering by being quite distracting and keeping the mind restless and busy. Why? When one is attached to things, one is never satisfied and always craves for more and better things. One is continuously engaged in achieving and acquiring the mind’s desires and only experiences loss and dissatisfaction in one’s life. By understanding this negative emotion and by eliminating it, the third discerning wisdom shines forth. By realizing discerning wisdom, the enlightened mind is experienced and one becomes one with the Buddha Amitabha. It is with this wisdom that one understands and has empathy with each and every living being and appreciates others’ qualities.
The Buddha Amitabha’s nature is the absence of attachment and desire and his activity is magnetizing. As already said, attachment and desire lead to the suffering of dissatisfaction, a state in which one always wants and strives for more and better things. Desire determines one’s behavior and not attaining what one desires leads to frustration and dissatisfaction. With the discerning wisdom and the realization of Buddha Amitabha, there is no attachment and desire and thus no dissatisfaction, or craving for more and better things. This realization is so powerful that all things are naturally magnetized as one’s own. There is no energy and force involved as in a state of desire.

Qualities Arising from Transforming Negative Emotions
We have given a brief description of the five dhyana buddhas who represent the purified qualities of the five disturbing emotions. When these five negative emotions are purified, the qualities of the five buddhas shine forth purely.
Buddha VairocanaThe fifth dhyana Buddha is Vairocana who is known as sangay namparnanzad, or in English, “perfect knowledge of all things as they manifest.” Buddha Vairocana is realized when the conflicting emotion of ignorance is removed. When one cannot things as they really are, one has the conflicting emotion of ignorance. As a result, one judges things from a mistaken point view. With the realization of the wisdom of dharmata, one realizes Buddha Vairocana. The example for this that is given is to say there is a rope lying on the floor in a dark room. Because of ignorance we mistake the rope for a snake and become alarmed and feel tremendous fear. The solution to this fear is to simply see the rope as really a rope and not a snake. This example shows how mind functions in a state of ignorance. The distress and fear is simply the result of misperceiving the situation and simply knowing the rope isn’t a snake eliminates all the fear and distress created. Buddha Vairocana holds the wheel of dharma in his hands, which symbolizes absence of ignorance and complete and clear knowledge of all things as they are and as they manifest – dharmata. He is realized when ignorance is removed, the quality of Buddha Vairocana. This wheel symbolizes the Buddha’s teachings, which show us what to abandon and what to take up in our gradual advancement to enlightenment. We learn how to give up and abandon negative emotions and how to develop wisdom. Thus, the dharma wheel brings us from ignorance to wisdom. In comparison, it was the wheels of a chariot in Buddha’s time that brought you to your destination. The wheel of dharma similarly carries you from the darkness of ignorance to the clarity of knowing each thing as it is. Both hands of Vairocana Buddha are placed in the mudra called “enlightenment” or sometimes “the mudra of turning thewheel of dharma.” Since the only means to remove ignorance and defilements is by learning the dharma, Buddha Vairocana discloses the dharma to all living beings. He is white which represents “without fault” and he rests in the center to the mandala and is on a lion’s throne. Each wisdom is associated with a particular skandha, which is a stage of perception and with a disturbing emotion of klesha. Next is given the wisdom this buddha represents along with the color of the deity. One can recognize this deity because he is holding a particular object and also is on a throne supported by a particular animal. Each wisdom has a feminine aspect which is the consort of this buddha. This wisdom also represents a particular element and a particular chakra in the body.