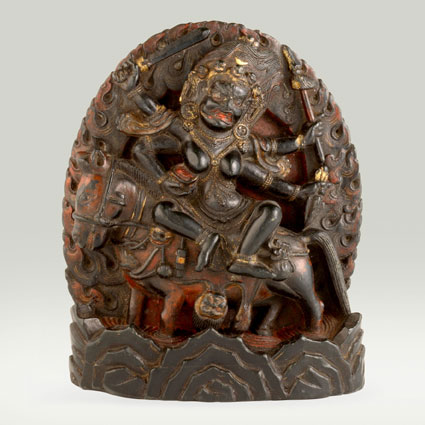 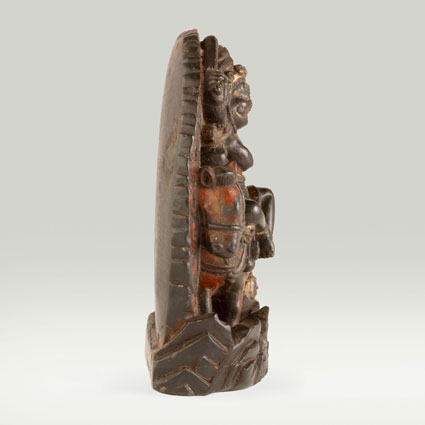 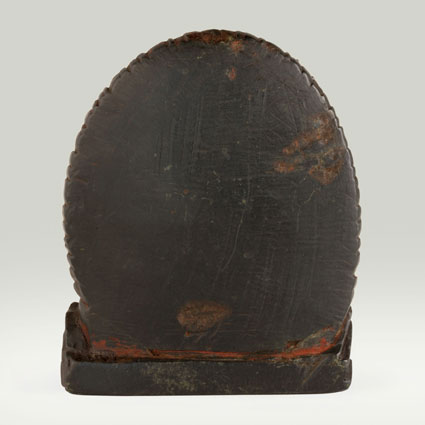 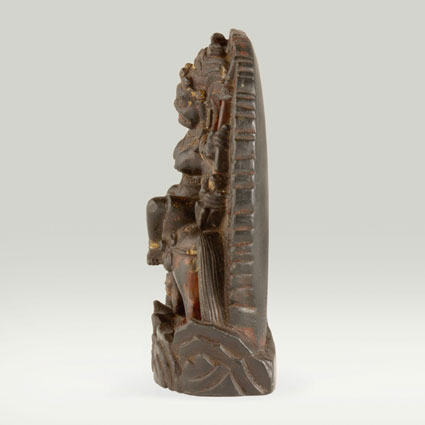 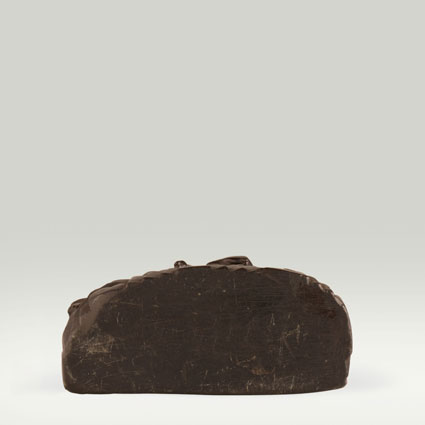 Materials: Stone with remains of pigments

This stone image represents a form of Sri-Devi (Tib.: dPal ldan lha mo) («palden lhamo»), a chief guardian-deity (dharmapala) of the Tibetan Buddhist tradition. The three-eyed fearsome Sri-Devi is riding a mule on a sea of blood, all set on a single lotus pedestal. There exist many different forms of Sri-Devi. Among the various forms is Jo mo whose realm is Jomolhari (Mt. Everest).

The three-eyed fearsome Sri-devi is riding a mule on a sea of blood. The mule carries a saddle made of human skin. The upper right arm which holds a sword (khadga), the upper left hand holds a banner (Skt. dhvaja, Tib. rgyal mtshan). The lower right hand holds aq skull-cup (kapala), the lower left hand brandises a ritual dagger (Skt. vajrakila, Tib. phur pu). She wears a garment tied around the waist and is decorated with a diadem of skulls, and bone ornaments. At least three of the five magical weapons of Sri-Devi adorn the sadde: The ball of thread (Tib. mtshon gyi gru gu); the bundle of red curses (Tib. byad dmar gyi khres po); the bag of diseases (Tib. sho rde'u dkar nag), and the demon cross-stick (Tib. bdud kyi khram bam) usually tucked into the girdle fastened around the waist. The object inserted into her mouth, according to the texts, should represent a stiff human corpse.

(formerly von Schroeder Coll.)
Palden Lhamo
Palden Lhamo (pronounced: 'Pelden Lhamo'), Panden Lamo (Wylie transliteration: dPal ldan Lha mo), Shri Devi (Sanskrit), or Okkin Tungri (Mongolian) is a protecting Dharmapala of the teachings of Gautama Buddha in the Gelug school of Tibetan Buddhism. She is also called Remati. She is the wrathful deity considered to be the principal Protectress of Tibet.
Palden Lhamo is the consort of Mahakala and has been described as "the tutelary deity of Tibet and its government", and as "celebrated all over Tibet and Mongolia, and the potent protector of the Dalai and Panchen Lamas and Lhasa."

de Nebesky-Wojkowitz, René, 1956. Oracles and Demons of Tibet: The Cult and Iconography of the Tibetan Protective Deities. s’Gravenhage: Mouton & Co. Pp. 22-37 - References to the iconography of Sri-Devi