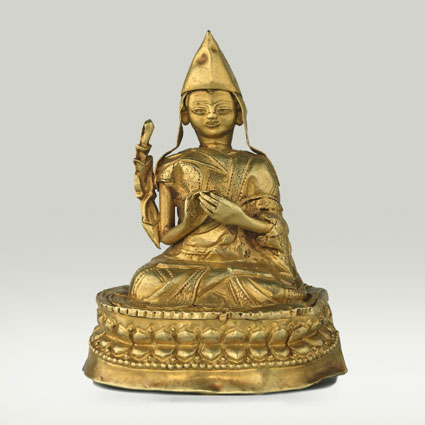 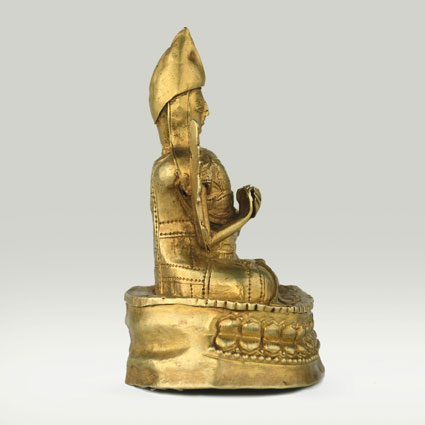 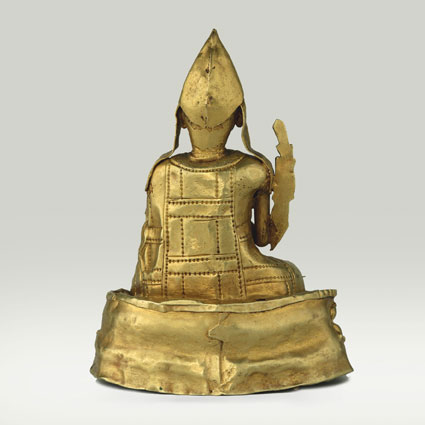 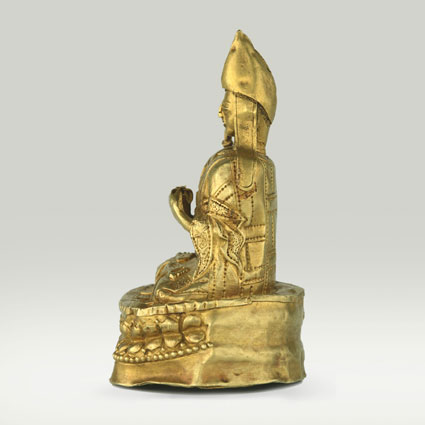 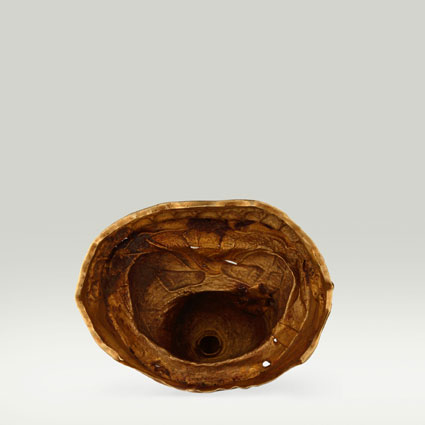 Je Tsongkhapa (Tsong-kha-pa) - (1357 – 1419)
Tsongkhapa (Tibetan: Tsong-kha-pa), whose name means "The Man from Onion Valley", was a famous teacher of Tibetan Buddhism whose activities led later to the formation of the Geluk (Dge-lugs) school. He is also known by his ordained name Lobsang Drakpa (Blo-bzang Grags-pa) or simply as "Je Rinpoche" (Rje Rin-po-che).
Tsongkhapa heard Buddha's teachings from masters of all Tibetan Buddhist traditions, and received lineages transmitted in the major schools.
His main source of inspiration was the Kadampa (Bka'-gdams-pa) tradition, the legacy of Atisa. Based on Tsongkhapa's teaching, the two distinguishing characteristics of the Gelug tradition are:
* the union of Sutra and Tantra, and
* the emphasis on Vinaya (the moral code of discipline)

Early years
Born into a nomadic family in Amdo province of Tibet during 1357, Tsongkhapa received the layman ordination (skt. Upasaka) at the age of three from the 4th Karmapa, Rolpe Dorje (Rol-pa'i Rdo-rje), and was entitled "Kunga Nyingpo" (Kun-dga' Snying-po). At the age of seven he took the novice ordination (skt. Sramanera, tib. Getsul) from Choje Dhondup Rinchen (Chos-rje Don-'grub Rin-chen) and was entitled "Lobsang Drakpa" (Blo-bzang Grags-pa). It was to his credit then, that at such an early age, he was able to receive the empowerments of Heruka Chakrasamvara, Hevajra, and Yamantaka, three of the most prominent wrathful deities of Tibetan Buddhism, as well as being able to recite a great many Sutras, not the least of which was Manjushri-nama-samgiti. Additionally, he would go on to be a great student of the Buddhist Vinaya, the doctrine of behavior, and even later the Six Yogas of Naropa, the Kalachakra Tantra, and the acclaimed practice of Mahamudra. At the age of 24 Tsongkhapa received the ordination of a full monk (skt. Bhikshu, tib. Gelong) in the Sakya Tradition.
From gZhon-nu blo-gros and Rendawa (Red-mda'-pa) he received the lineage of the Pramanavarttika transmitted by Sakya Pandita (Sa-skya Pandita). He mastered all the courses of study at Drikung Monastery in Central Tibet, a major Kagyue Center, and travelled extensively in search of knowledge and studied with more than 100 teachers of all the existing traditions all topics of the doctrine, including Dzogchen.

Tsongkhapa, who was considered by many as an emanation of Atisha, received the Kadam lineages, and studied the major Sarma (gsar-ma) Tantras (the Tantras from the “New Translation School”) under Sakya and Kagyue masters. He also studied with Nyingma siddha Legpey Dorje (Legs-gyi rdo-rje), and the Zalupa Chökyi-pal (Zha-lu-pa Chos-kyi-dpal).

In addition to his studies, he engaged in extensive meditation retreats. He is reputed to have performed millions of prostrations, mandala offerings and other forms of purification practice. Tsongkhapa often had visions of meditational deities and especially of Manjushri, with whom he could communicate directly to clarify difficult points of the scriptures.
As such an accomplished scholar and practitioner, he was effective as a teacher in Tibetan Buddhism, and became a leading figure amongst his peers as well as his students. Many of his teachers eventually joined him as students, like Rendawa, Umapa, the Nyingma Lama Lhodrak and they taught and revered each other. Out of his strong influence, compassion, and wisdom he is referred to as a second Buddha.

Tsongkhapa's legacy
With the foundation of the Ganden monastery in 1409, he laid down the basis for what was later named the Gelug ("virtuous ones") order. At the time of the foundation of the Ganden monastery, his followers became to be known as "Gandenbas". Tsongkhapa never announced the establishment of a new monastic order. Tsongkhapa's teachings drew upon the teachings of Atisha, emphasizing the study of Vinaya, the Tripitaka, and the Shastras. Atisha's Lamrim inspired Tsongkhapa's Lam-rim chen-mo, which became a main text among his followers. He also practiced and taught extensively the Vajrayana, and especially how to bring the Sutra and Tantra teachings together, wrote works that summarized the root teachings of the Buddhist philosophical schools, as well as commentaries on the Pratimoksha, Prajnaparamita, Candrakirti's Madhyamakavatara, logic, and the Serma Tantras. Tsongkhapa introduced monastic reforms and emphasized a strong monastic Sangha. Further he promoted the study of logic, encouraged formal debates as part of Dharma studies, and instructed disciples in the Guhyasamaja, Kalacakra, and Hevajra Tantras.

Tsongkhapa was one of the foremost authorities of Tibetan Buddhism at the time. He composed a devotional prayer called The Migtsema Prayer to his Sakya master Rendawa, which was offered back to Tsongkhapa, with the note of his master saying that these verses were more applicable to Tsongkhapa than to himself.
After Tsongkhapa's passing away several biographies were written by Lamas of different traditions, and they all agreed that he was a teacher without parallel. The 9th Karmapa, Wangchuk Dorje, praised Tsongkhapa as one "who swept away wrong views with the correct and perfect ones." The 8th Karmapa, Gyalwa Mikyö Dorje, wrote in his poem In Praise of the Incomparable Tsong Khapa:
"When the teachings of the Sakya, Kagyue, Kadam
And Nyingma sects in Tibet were declining,
You, O Tsong Khapa, revived Buddha's Doctrine,
Hence I sing this praise to you of Ganden Mountain."

Further, it is said that the Buddha Shakyamuni spoke of his coming as an emanation of the Bodhisattva Manjusri in the short verse from the Root Tantra of Manjushri:
"After I pass away
And my pure doctrine is absent,
You will appear as an ordinary being,
Performing the deeds of a Buddha
And establishing the Joyful Land, the great Protector,
In the Land of the Snows."

Although Tsongkhapa would finally pass away in 1419 at the age of sixty, he left to the world 18 volumes of collected teachings, with the largest amount being on Guhyasamāja tantra. These 18 volumes contain hundreds of titles relating to all aspects of Buddhist teachings and clarify some of the most difficult topics of Sutrayana and Vajrayana teachings.

These scriptures are the prime source for the studies of the Gelugpa (Dge-lugs-pa) tradition and these and other teachings of Tsongkhapa endured into the modern age and are seen as a protection against misconceptions in Mahayana and Vajrayana Buddhism.

The 14th Dalai Lama has highlighted the fidelity of Tsong Khapa's work to the meaning found in Buddhapalita's work. Tsong Khapa's work is praised as being profound and true to tradition, essentially a clarification and condensation of the transmitted teachings, which after all, are intended to encapsulate unchanging truth.

After Tsongkhapa had founded the monastery of Ganden in 1409, it became his main seat. He had many students, among whom Gyaltsab Dharma Rinchen (1364-1431), Khedrup Gelek Pelzang (1385-1438), the first Dalai Lama (1391-1474), Togden Jampal Gyatso, Jamyang Choje, Jamchenpa Sherap Senge and Gyalwa Gendün Drup were the most outstanding. After Tsongkhapa's passing his teachings were held and kept by Gyaltsab Dharma Rinchen and Khedrub Gelek Pälsang. From then on, his lineage has been held by the Ganden Tripas, the throne-holders of Ganden Monastery, among whom the present one is Khensur Lungri Namgyal, the 101st Ganden Tripa.
After the founding of Ganden Monastery by Tsongkhapa, Drepung Monastery was founded by Jamyang Choje, Sera Monastery was founded by Chöje Shakya Yeshe and the Gyalwa Gendün Drup founded Tashi Lhunpo Monastery. Many Gelug monasteries were built throughout Tibet but also in China and Mongolia.

Among the many lineage holders of the Yellow Hat Tradition (Gelugpas) there are the successive incarnations of the Panchen Lama as well as the Chagkya Dorje Chang, Ngachen Könchok Gyaltsen, Kyishö Tulku Tenzin Thrinly, Jamyang Shepa, Phurchok Jampa Rinpoche, Jamyang Dewe Dorje, Takphu Rinpoche, Khachen Yeshe Gyaltsen and many others.

The annual Tibetan prayer festival Monlam Prayer Festival (Mönlam Chenmo) was established by Tsongkhapa. There he offered service to ten thousand monks. The establishment of the Great Prayer Festival is seen as one of his Four Great Deeds. It celebrates the miraculous deeds of Buddha Shakyamuni.