Form of Ratnasambhava - one of the five transcendental Buddhas 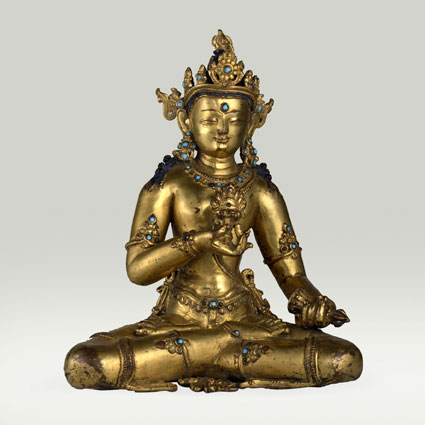 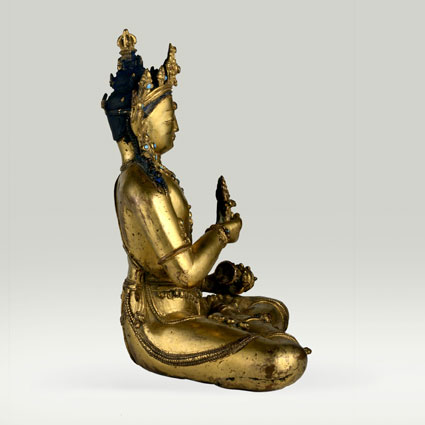 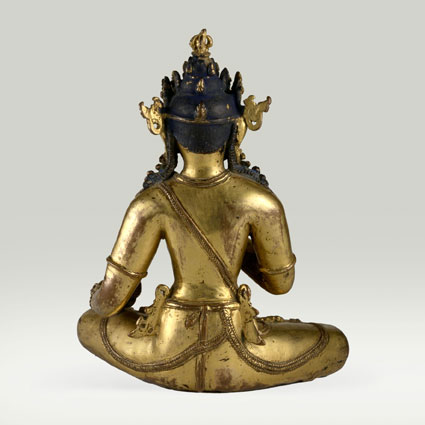 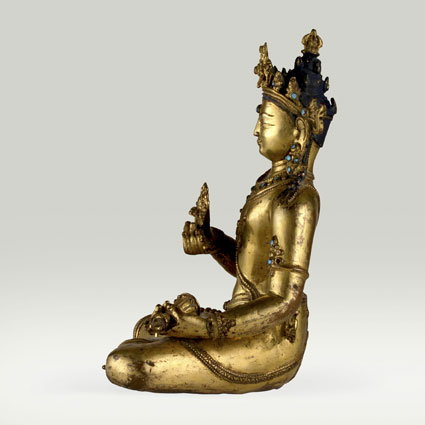 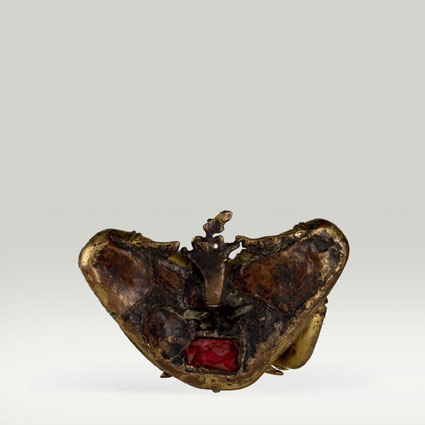 Description
Mythology
Iconography
Hollow cast in one piece. The ornaments are inset with turquoise, coral, and lapis lazuli.

Qualities Arising from Transforming Negative Emotions
We have given a brief description of the five dhyana buddhas who represent the purified qualities of the five disturbing emotions. When these five negative emotions are purified, the qualities of the five buddhas shine forth purely.
Buddha Amitabha
The third dhyana buddha is Amitabha who represents the purification of desire also called attachment. When we are under the influence of attachment, we discriminate between good and bad, beautiful and ugly, and then we cling to what seems to be attractive and shun those things which seem bad or ugly. Attachment and aversion are disturbing emotions that arise from not understanding the nature of things as they are and as they appear. It is due to ignorance that mind accepts and rejects objects of attachment and aversion. With the wisdom of discrimination, one knows things as they appear just as they are without any confused and prejudiced opinions. This comes about by purifying attachment and realizing Buddha Amitabha. Buddha Amitabha is the Sanskrit name and the Tibetan name is
sangay odpamed, which means “boundless light.” When one has developed the awareness of knowing everything as it manifests, one has developed the clarity of boundless light, which is completely free from confusion. This realization is described as odpamed or “boundless light.” We can compare this state with an example of a lamp. A faulty lamp cannot illuminate a room clearly, whereas a perfect lamp can allow us to see things distinctly and clearly. The light of Buddha Amitabha is therefore
boundless and is realized through the purification of attachment and desire.
Buddha Amitabha is of the lotus family because a lotus grows in muddy water while its blossoms remain stainless. Likewise, Amitabha represents freedom from attachment, and it is attachment which causes us to experience pain, loss, and dissatisfaction that never finds fulfillment. Purification of the negative emotion of attachment is a state of immaculate, pure peace. Therefore, the Buddha Amitabha is seated in the full vajra posture and both hands resting in the meditative posture of mental clarity. He fully understands things as they are and as they appear without subjective notions. This state is one of peace and ease. He resides in the buddha realm of Dewachen.

Pal, Pratapaditya, 2001. Desire and Devotion. Art from India, Nepal, and Tibet in the Ford Collection. Art Media Resources Ltd. P. 206; no. 118 - Compare with an image of the same group