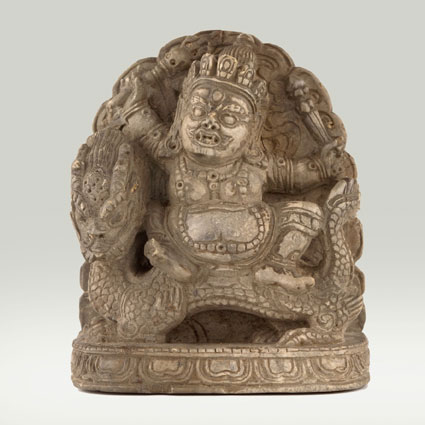 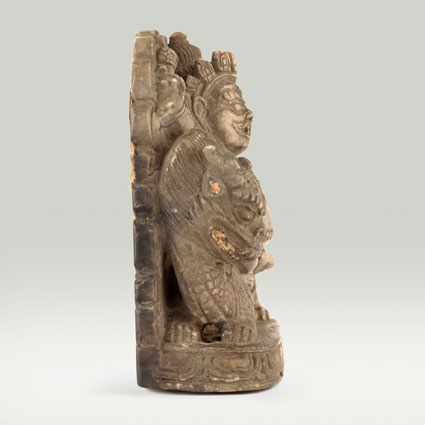 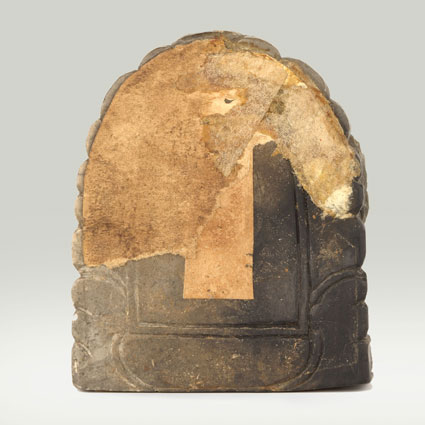 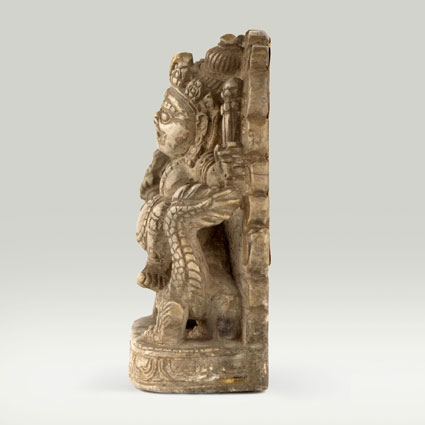 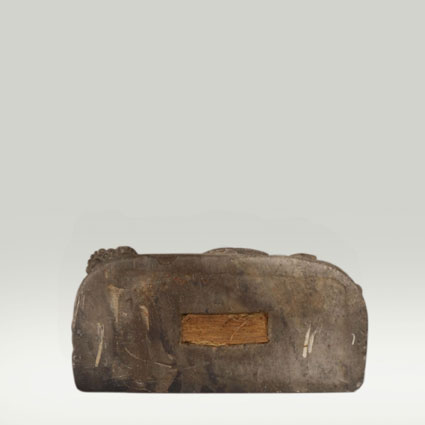 Iconography
DharmapalaIn Vajrayana Buddhism, a dharmapala (Tibetan chos-kyong) is a type of wrathful deity. The name means "Dharma-defender" in Sanskrit, and the dharmapalas are also known as the Defenders of the Law (Dharma), or the Protectors of the Law, in English. In Vajrayana iconography and thangka depictions, dharmapalas are fearsome beings, often with many heads, many hands, or many feet. Dharmapalas often have blue, black or red skin, and a fierce expression with protruding fangs. Though dharmapalas have a terrifying appearance and countenance, they are all bodhisattvas or buddhas, meaning that they are embodiments of compassion that act in a wrathful way for the benefit of sentient beings. In Tibet, the eight principal Dharmapalas are:    * Mahakala (Tib. Nagpo Chenpo)    * Yama (Tib. Shinje)    * Yamantaka (Tib. Shinje Shed)    * Hayagriva (Tib. Tamdrin)    * Vaisravana (Tib. Kubera)    * Shri Devi (Tib. Palden Lhamo)    * Changpa    * Prana Atma (Tib. Begtse) The practice of relying upon dharmapalas began in ancient India as part of the Buddhist tantra tradition and spread to Tibet and Japan.In Tibet, most monasteries have a dedicated dharmapala which was originally comparable to a genius loci. The many forms of Mahakala, for example, are emanations of Avalokiteshvara (sometimes related to the Hindu god Shiva). Kalarupa and Yamantaka are considered emanations of the Buddha of Wisdom (Manjushri); and Shri Devi (Tib. Palden Lhamo).The main functions of a dharmapala are to avert the inner and outer obstacles that prevent practitioners from attaining spiritual realizations, as well as to foster the necessary conditions for their practice. Dharmapala can be Buddhas, Bodhisattvas or Dharmarajas (Damchen in Tibetan). Only the dharmapalas that have realized shunyata are seen as an object of Buddhist refuge. The Damchen were originally Tibetan mountain-spirits who were bound under oath to protect the Dharma by Padmasambhava and other Buddhist saints during the period of transmission of Buddhism from India to Tibet.In Japan, the dharmapala Yamantaka (Daiitoku) is classified as a Wisdom King. Some other dharmapalas, notably Mahakala (Daikoku), belong to the fourth hierarchy of deities (tenbu). Related deitiesIn Tibetan Buddhism, there are two other classes of defender, the lokapalas and ksetrapalas. Papiya, Guan Yu and Hachiman are also known as defenders.