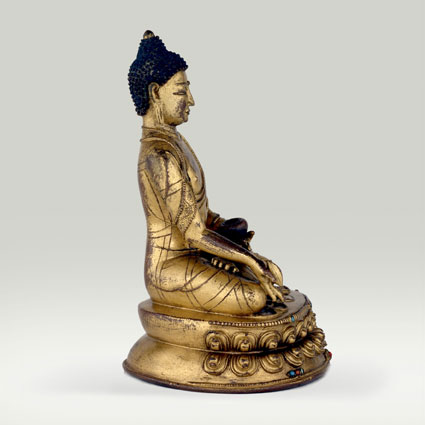 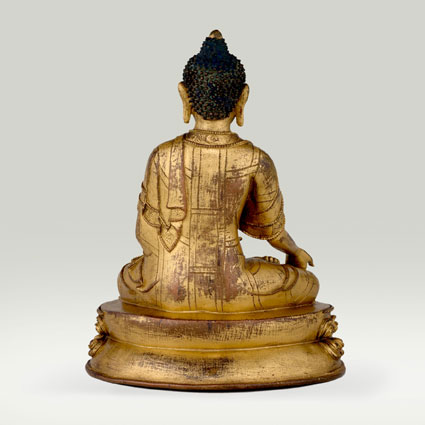 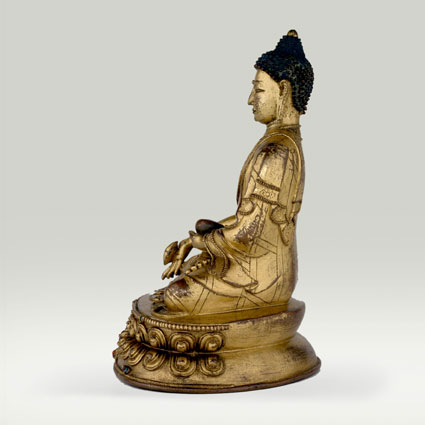 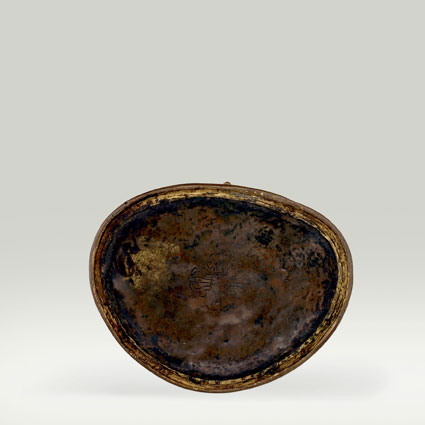 Description
Iconography
Hollow cast in one piece.
The lotus pedestal is inset on the front with coral and turquoise.
The face retains traces of painted gold and the hair is painted with a blue pigment.
The bottom of the pedestal is sealed with a copper plate decorated with the visvavajra emblem.

Bhaisajyaguru (Tib. sMan bla), one of the medecine Buddhas, is seated in the diamond attitude (vajraparyanka) on a double pedestal with beaded borders. He holds in the right hand extended in the gesture of charity (varada-mudra) a myrobalan fruit and holds with the left hand resting in his lap an alms bowl (patra). The upper monastic garment (uttarasanga) is patchwork quilt rendered with folds and covers both shoulders. The borders of the garment are decorated with beaded strings.

Bhaisajyaguru more formally Bhaisajyaguruvaiduryaprabha and also known as the Master of Healing or Medicine Buddha, is the Buddha of healing. His full name means "Medicine Master Lapis Lazuli Light". In Mahayana Buddhism, Bhaisajyaguru represents the healing aspect of the historical Buddha Shakyamuni. The use of the analogy of a Buddha being depicted as a doctor who cures the illness of suffering using the medicine of his teachings appears widely in Buddhist scriptures.
Origin
Bhaisajyaguru is described in the eponymous Bhaisajyaguru-sutra as bodhisattva who made and fulfilled 12 vows, two of them related to healing. On achieving Buddhahood, he became the Buddha of the realm of Vaiduryanirbhasa in the eastern quarter, where he is attended to by the bodhisattvas Nikko and Gakko. Yakushi is notably absent from the Mandala of the Two Realms, but is one of the Thirteen Buddhas.

Iconography
Bhaisajyaguru is typically depicted seated, wearing the three robes of a Buddhist monk, with a lapis-colored jar of medicine nectar in his left hand and the right hand resting on his right knee, holding the stem of the aurara plant between thumb and first finger. Image of Medicine Buddha

Role in Japanese Buddhism
Starting in the 7th century Yakushi has been the object of a popular cult in Japan, largely supplanting the previous cult of Ashuku (Akshobhya). Some of Yakushi's role has been taken over by Jizo (Ksitigarbha), but Yakushi still presides over the Japanese Buddhist memorial service to dead.

Role in Tibetan Buddhism
The practice of Medicine Buddha, the Supreme Healer (or Sangye Menla in Tibetan) is not only a very powerful method for healing and increasing healing powers both for oneself and others, but also for overcoming the inner sickness of attachment, hatred, and ignorance, thus to meditate on the Medicine Buddha can help decrease physical and mental illness and suffering.
Tibetan Buddhists consider the Medicine Buddha Empowerment to be the most powerful blessing for healing, dispelling sickness and for awakening the innate healing wisdom that lies within every individual.