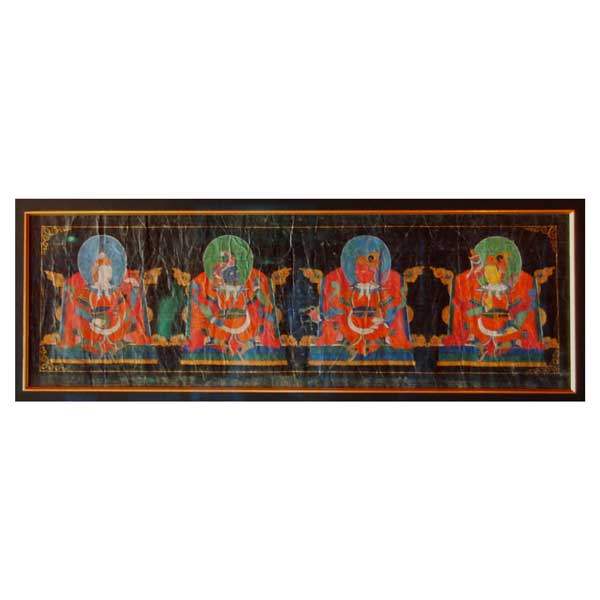 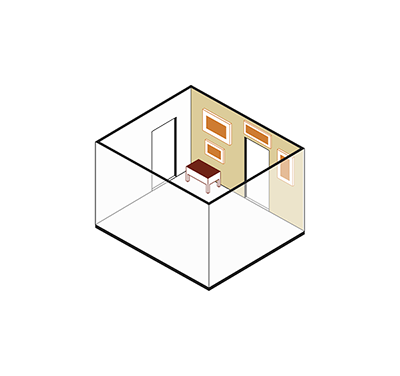 The Direction Guardians, or Four Guardian Kings, or the Four Heavenly Kings, reside on the innermost ring of islands (the lower slopes) around the four sided mythical Mount Sumeru, the center of the idealized Buddhist and Hindu worlds. Vaishravana (North), Dhritarashtra (East), Virudhaka (South), Virupaksha (West).
There are many names commonly used in English for this group of four figures, Four Direction Kings, Four Guardians of the Directions, Four Kings, Four Kings of the Directions. In Tibetan they are generally referred to as the Four Great Kings (gyal chen shi). Despite all of the different names they are still the same group of four figures commonly represented in Himalayan and Tibetan art.

These four figures represent the first Indian gods incorporated into the Buddhist narrative. The Four Guardian Kings came before Shakyamuni Buddha just after the Buddha achieved enlightenment under the bodhi tree. The four offered, each individually, a black bowl made of sapphire or lapis lazuli to the Buddha. The Buddha accepted the offer and the four bowls miraculously became one bowl. This is the black bowl that is typically seen in the lap of Shakyamuni in painting and sculpture.
The Four Guardian Kings are typically found with the group of Shakyamuni & Sixteen Arhats in painting and sculpture. They are commonly found as mural paintings at the entrance way of a Buddhist temple. Although primarily associated with the idea of Hinayana Buddhism, the Four Kings are found in Vajrayana Buddhism as secondary figures, attendant deities and minor figures in the outer rings of mandalas. They are especially common in the mandalas of the lower Tantras of Yoga, Charya and Kriya where they are generally located at the four doors to the celestial; palace in the middle of the circular mandala.

The iconography of the Four Kings generally follows a Chinese or Central Asian style. Each figure is depicted wearing heavy, layered and armored, clothing in the manner of a warrior. In later painted depictions from the 18th century, Eastern Tibet, the Four Kings are found depicted in more of an Indian peaceful deity figurative style. (See an example of Virudhaka as a peaceful deity).
Of the Four Guardian Kings, only Vaishravana is singled out and employed as an individual meditational deity in Vajrayana Buddhism. Aside from his place and depiction in the group of four he is most commonly depicted as Vaishravana Riding a Lion. He has a number of other forms and is primarily employed as a wealth deity.