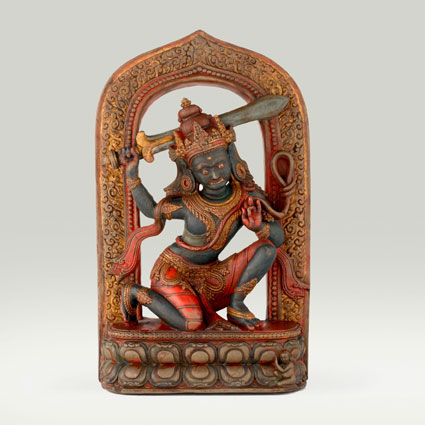 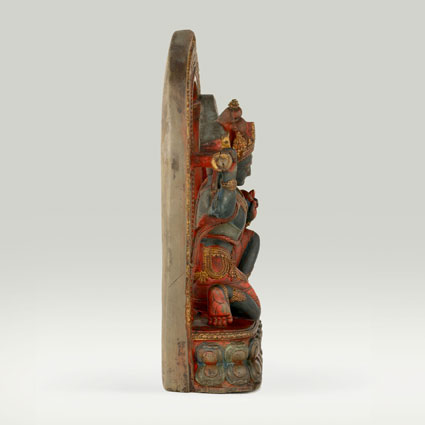 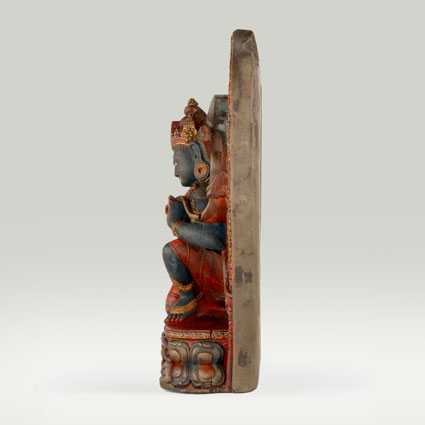 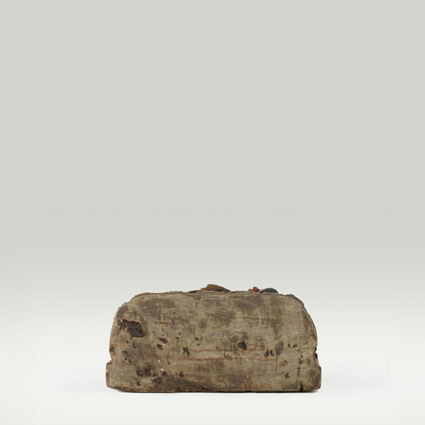 This statue depicts a form of Acala and represents an example of a stone-sculpture made by a Newar artist for a Tibetan patron during the 13th century. Following the destruction of Buddhism in India at the end of the 12th century, it was the Newar artists who became the dominant foreign craftsman in Tibet and also in China.

The fearful three-eyed form of Acala (Tib. Mi gyo ba), resting on his right knee and left foot, is supported by a double lotus pedestal with an upper beaded border. Acala holds in the right uplifted hand his principal attribute the sword (khadga) as symbol of “cutting through ignorance”. He holds with the left hand, displayed in the gesture of exorcism (karana mudra) with the index finger and small finger erect, the noose (pasa), an attribute of mainly wrathful deities to catch the enemies of Buddhism. Acala is dressed with a cloth tied around the waist. He is decorated with jewelled ornaments, namely with a three fold crown in front of the helmet, a pair of circular earrings, a broad necklace with attached pendants, and ornaments at the upper arms, wrists, ankles and feet, and the “investiture with the sacred thread” (upavita). Acala wears over the shoulders a ribbon-like scarf with swirling ends hanging down at both sides. The image is encircled by an open worked  flaming aureole.

The name Acala means “mountain” or literally “immobile”, and he is always shown in fearsome attitude and represents one of the ten Khroda protector deities in various Mandalas.

The Sadhanamala (SM), Nispannayogavali (NSP), Kryasamgraha (KS) and the Pindikrama-Sadhana (PKS) contain descriptions of several forms of Acala (Tib. Mi gyo ba): SM 86–87, 211–12; NSP 1–3, 11, 20, 26; KS 2; PKS 175–78. Acala is known in the Sanskrit literature under various different names such as Candacala, Candamaharosana, Mahacandarosana (SM 85–88), Kekara (SM 212) or Vajrabhisana (NSP 11, KS 2). In this publication all standing forms of Acala, regardless whether trampling on Ganesa or not are classified as Nila Acala (“Blue Acala”) (Tib. Mi gyo ba sngon po). The kneeling forms of Acala are classified as Sita Acala or “white Acala” (Tib. Mi gyo ba dkar po). Both forms can have two or three eyes.

Acala
Also known as Acalanatha, Aryacalanatha, Acala-vidya-raja and Candamaharosana. In Vajrayana Buddhism, Acala (alternatively, Achala or Acala) is the best known of the Five Wisdom Kings of the Womb Realm. Acala means "The Immovable One" in Sanskrit. Acala is also the name of the eighth of the ten stages of the path to buddhahood.