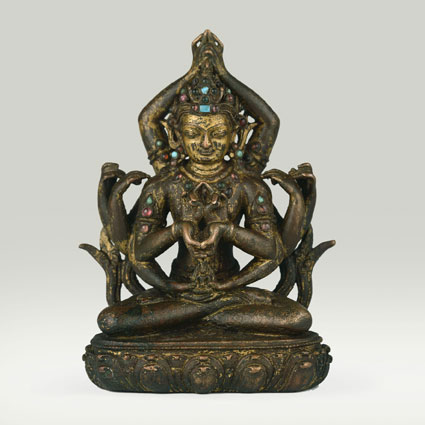 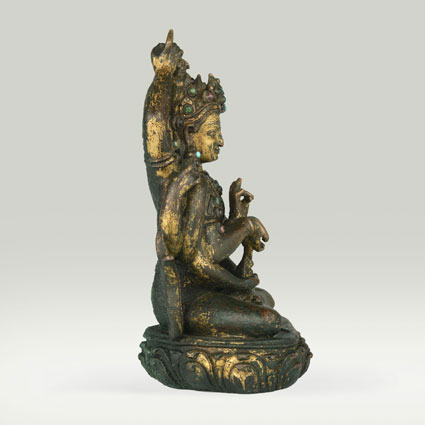 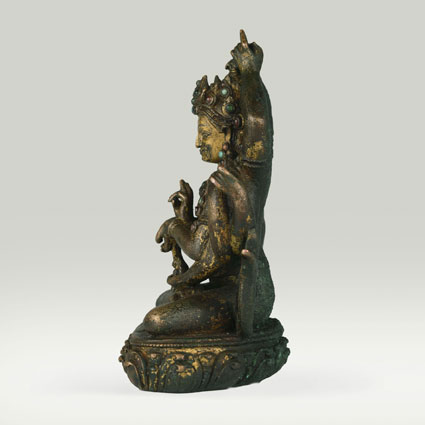 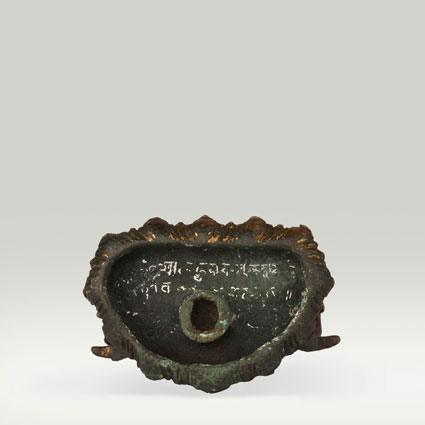 Description
Iconography
Copper with traces of gilt; hollow cast in one piece.
The back side of the image is covered with green patina.
The lotus pedestal is not sealed. The ornamentation of the crown and necklace is inset with precious stones and turquoise.
The garment is decorated with ornaments.

Namasangiti is seated in the diamond attitude (vajraparyankasana) on a single lotus pedestal. The twelve-armed Bodhisattva which does not hold any more any attributes, used to hold in two hands a sword (khadga) and a ceremonial staff (khatvanga) with a vajra tip. The remaining ten hands display various gestures. He is clad with a cloth tied around the waist with a belt and a shawl placed over the shoulders and falling over the arms. Namasangiti  wears jewelled ornaments, namely a crown in front of a helmet with some curled strands of hair falling on the shoulders, a pair of earrings, a necklaces with attached pendants, and ornaments at the upper arms, wrists and feet. Note the small effigy of Amitabha held by the lowest pair of arms.

Inside the pedestal are two lines of Newari inscription in Devanagari script.

In the usual form, Namasangiti had one head and twelve arms. Namasangiti Manjushree is seated with dhyanamudra. Namasangiti Manjushree wears all the bodhisattva ornaments typical of Sambhogakaya aspects. He has Ushnisa in his head and wears a crown. His uppermost arms above his head are in the uttarabodhi mudra i.e. two hands folded to form a prostration attitude. His other two hands at the breast level are in dharmacakra or (abhaya mudra?). Two other hands are in tarpana mudra i.e. about to offer water from the alms bowl. Two hands hold an alms bowl kept in the lap. Two hands at the shoulder level hold sword and scripture on a lotus and the other two hands hold bow and arrow. This form of Namasangiti is very popular in Kathmandu valley.

The praises to the Buddha of Wisdom, Manjushri
While consisting of only 160 verses and some mantra sentences, the work condenses an enormous tantric lore, so much that it garnered exalted mention in the Vimalaprabha - the great commentary on the Kalachakra - and it is cited a number of times in the celebrated master Naropa`s Hevajra tantra commentary.