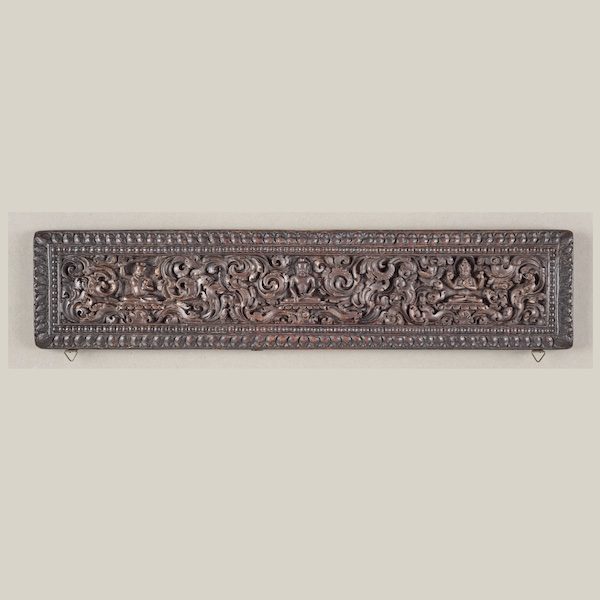 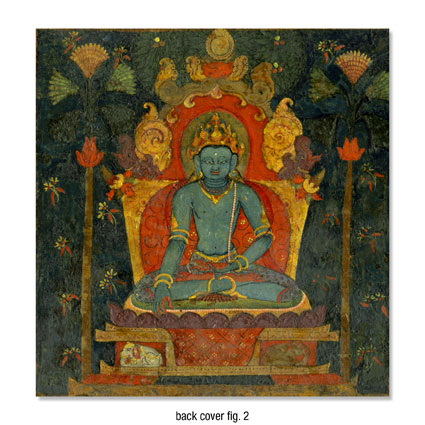 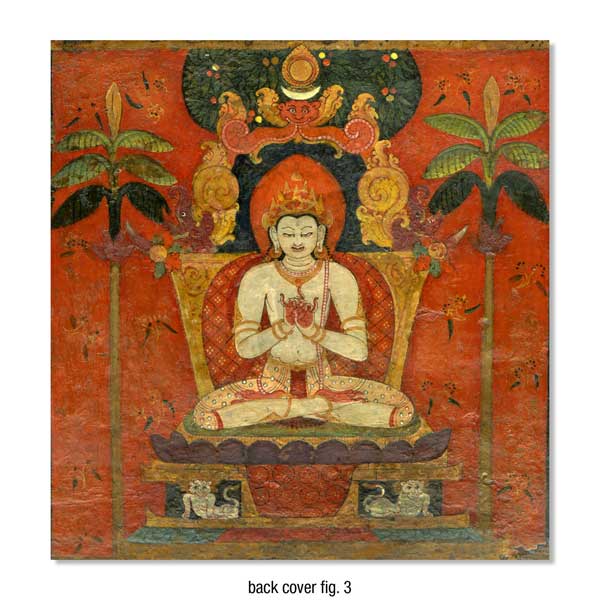 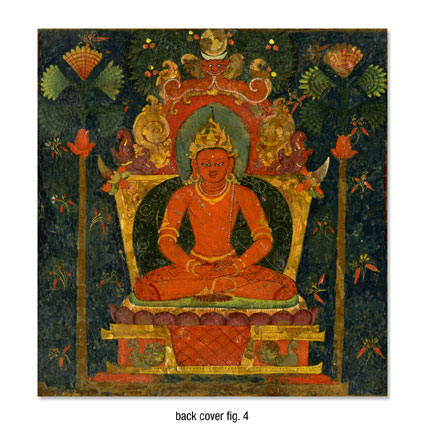 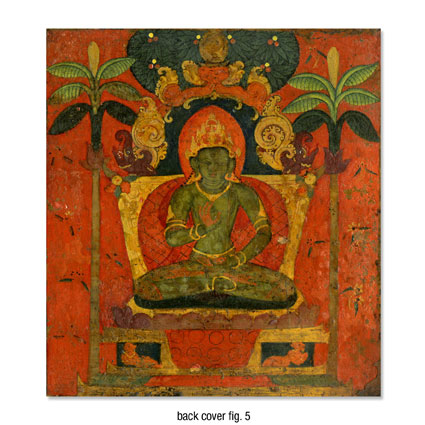 Wood, carved in deep relief on the outer side.

The throne-backs, with pointed upper corners, are decorated with textiles of different colours and design. Above, and identical in the case of all five images, are tymphanons attached with makara finals (makaratorana)surmounted by the grinning faces of a kirttimukhafrom whose mouth beaded tassels issue.

Each ot the five enthroned crowned Tathagatas is palced in front of a flowering tree, of wich only the crown is visible. Three of the Buddhas, namely Ratnasambhava, Vairocana, and Amoghasiddhiare flanked by a pairs of plantain trees, whereas Akshobhyaand Amitabha have a kind of fan palms on either side. The free space in between is filled with colourful flowers falling from the sky.

The outer side of the manuscript covers is carved in deep relief decorated with images of Manjusri, Aksobhyaand Prajnaparamita separated from each other and surrounded by foliate ornaments.

Based on their distinct colours, these five Buddhas can be identified beyond doubt as a group of the fivetathagatas. In the case of individual metal sculptures of crowned Buddhas, images oftathagatascan only be distinguished from statues of Shakyamuni if the related animal mounts are depicted. However, this is not the case with Shakyamuni and Vairocana, both of which can bear images of lions on the pedestals.

Tathagata, a term for the Buddhas in the sambhogakayaaspect, was mentioned for the first time in the 3rd century AD by asanga in one of his sadanasof Prajnaparamita.

2. Buddha Ratnasambhava
The Buddha Ratnasambhava is the purification of pride. Ratnasambhava is Sanskrit and the Tibetan name is sangay rinchenjungdan. The Tibetan word sangay means “buddha” and the word rinchen means “precious” referring to all precious, good, and immaculate things. The word jungdan means “the source.” So Ratnasambhava is the source of all good qualities with these precious qualities being the absence of pride. When ego and pride have been removed, one is open enough to actually receive all knowledge and qualities, that is the realization of Sangay Rinchen Jungdan. Knowing the meaning of Rinchen Jungdan, one understands why his activity encompasses the enrichment of all precious qualities of realization. Ratnasambhava resides in the south and is yellow or gold in color. The color gold represents wealth and Ratnasambhava holds a wish-fulfilling jewel at his heart in his left hand. The wish-fulfilling jewel is a jewel which gives a person everything that he or she desires and so this also symbolizes enrichment. He is seated in the vajra posture of fulfillment on a horse’s throne representing the four bases or legs of miraculous powers that enables unobstructed passage everywhere. His right hand is in the mudra of giving supreme generosity, i.e., his activity is supreme generosity.

3. Buddha Amitabha
The third dhyana buddha is Amitabha who represents the purification of desire also called attachment. When we are under the influence of attachment, we discriminate between good and bad, beautiful and ugly, and then we cling to what seems to be attractive and shun those things which seem bad or ugly. Attachment and aversion are disturbing emotions that arise from not understanding the nature of things as they are and as they appear.3 It is due to ignorance that mind accepts and rejects objects of attachment and aversion. With the wisdom of discrimination, one knows things as they appear just as they are without any confused and prejudiced opinions. This comes about by purifying attachment and realizing Buddha Amitabha. Buddha Amitabha is the Sanskrit name and the Tibetan name is sangay odpamed, which means “boundless light.” When one has developed the awareness of knowing everything as it manifests, one has developed the clarity of boundless light, which is completely free from confusion. This realization is described as odpamed or “boundless light.” We can compare this state with an example of a lamp. A faulty lamp cannot illuminate a room clearly, whereas a perfect lamp can allow us to see things distinctly and clearly. The light of Buddha Amitabha is therefore boundless and is realized through the purification of attachment and desire. Buddha Amitabha is of the lotus family because a lotus grows in muddy water while its blossoms remain stainless. Likewise, Amitabha represents freedom from attachment, and it is attachment which causes us to experience pain, loss, and dissatisfaction that never finds fulfillment. Purification of the negative emotion of attachment is a state of immaculate, pure peace. Therefore, the Buddha Amitabha is seated in the full vajra posture and both hands resting in the meditative posture of mental clarity. He fully understands things as they are and as they appear without subjective notions. This state is one of peace and ease. He resides in the buddha realm of Dewachen.

4. Buddha Amogasiddha
Buddha Amogasiddha is realization of all-accomplishing wisdom. The Tibetan word for Buddha Amogasiddha is sangay donyodtrubpa. The word danyod means “meaningful” and the word trubpa means “accomplishment.” So Buddha Amogasiddha means “whatever is meaningful and fruitful is accomplished.” He is also the complete purification of jealousy, which is a hindrance for both material and spiritual success. His activity is perfect accomplishment and fulfillment of meaningful aims. Furthermore, his activity removes ordinary daily hindrances such as illnesses and obstacles. This is why Ratnasambhava’s activity is meaningful accomplishment. Buddha Amogasiddha holds a double-vajra in the form of a cross in his left hand, which symbolizes that his activity pervades and touches all directions. He sits in the full lotus posture. The left hand of all five dhyana Buddhas rests in the meditative posture of the changeless realization of dharmata. Amogasiddha’s right hand is in the mudra of fearless protection. He protects all living beings from any mishaps, obstacles, and negative influences. So his posture is known as “the mudra of fearless protection.” He is white which represents “without fault” and he rests in the center to the mandala and is on a lion’s throne. Amogasiddha is green and resides in the north holding a sword representing the cutting of existence.

5. Buddha Vairocana
The fifth dhyana Buddha is Vairocana who is known as sangay namparnanzad, or in English, “perfect knowledge of all things as they manifest.” Buddha Vairocana is realized when the conflicting emotion of ignorance is removed. When one cannot things as they really are, one has the conflicting emotion of ignorance. As a result one judges things from a mistaken point view. With the realization of the wisdom of dharmata, one realizes Buddha Vairocana. The example for this that is given is to say there is a rope lying on the floor in a dark room. Because of ignorance we mistake the rope for a snake and become alarmed and feel tremendous fear. The solution to this fear is to simply see the rope as really a rope and not a snake. This example shows how mind functions in a state of ignorance. The distress and fear is simply the result of misperceiving the situation and simply knowing the rope isn’t a snake eliminates all the fear and distress created. Buddha Vairocana holds the wheel of dharma in his hands, which symbolizes absence of ignorance and complete and clear knowledge of all things as they are and as they manifest— dharmata. He is realized when ignorance is removed, the quality of Buddha Vairocana. This wheel symbolizes the Buddha’s teachings, which show us what to abandon and what to take up in our gradual advancement to enlightenment. We learn how to give up and abandon negative emotions and how to develop wisdom. Thus the dharma wheel brings us from ignorance to wisdom. In comparison, it was the wheels of a chariot in Buddha’s time that brought you to your destination. The wheel of dharma similarly carries you from the darkness of ignorance to the clarity of knowing each thing as it is. Both hands of Vairocana Buddha are placed in the mudra called “enlightenment” or sometimes “the mudra of turning the wheel of dharma.” Since the only means to remove ignorance and defilements is by learning the dharma, Buddha Vairocana discloses the dharma to all living beings. He is white which represents “without fault” and he rests in the center to the mandala and is on a lion’s throne. So these are the five buddha families and on page 16 and 17 there is a diagram giving many of the qualities and characteristics of these five wisdoms. The chart gives the Sanskrit and Tibetan name for the five wisdom Buddhas. Then it gives the pure realm that these buddhas live in. Each wisdom is associated with a particular skandha which is a stage of perception and with a disturbing emotion of klesha. Next is given the wisdom this buddha represents along with the color of the deity. One can recognize this deity because he is holding a particular object (given in H) and also is on a throne supported by a particular animal (given in L). Each wisdom has a feminine aspect which is the consort of this buddha. This wisdom also represents a particular element and a particular chakra in the body.