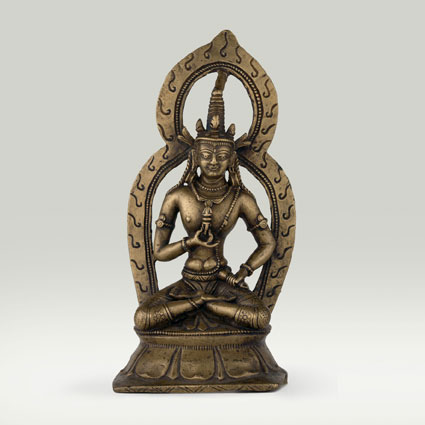 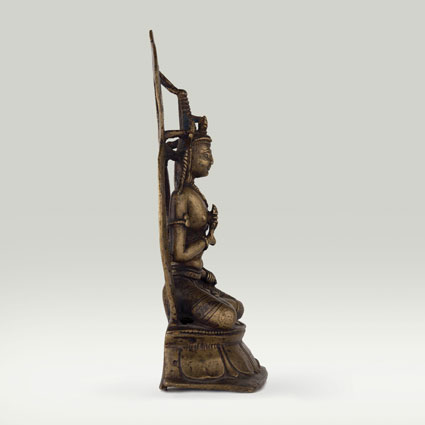 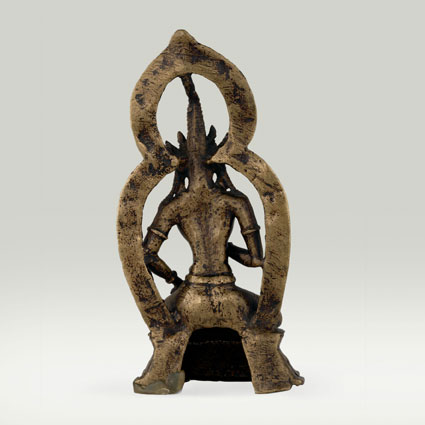 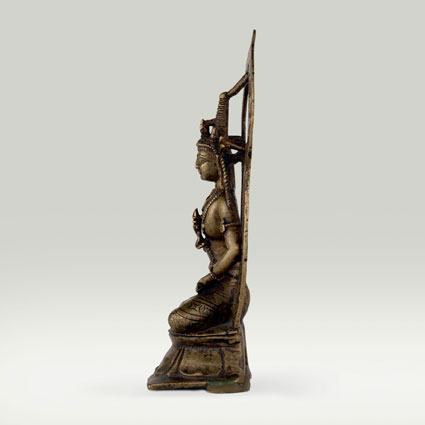 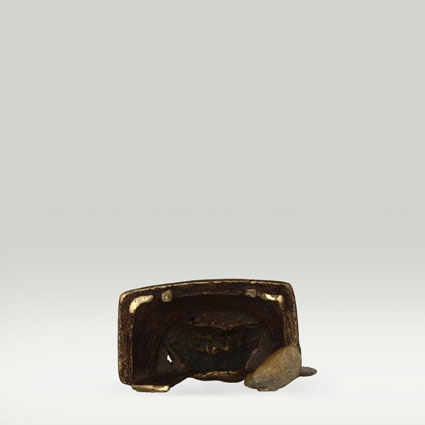 Hollow cast in one piece.
The garment is decorated with linear patterns and clusters of dots. T
he bottom of the pedestal is not sealed.

Vajrasattva (Tib. rDo rje sems dpa’), slightly bend at the hip, is seated in the diamond attitude (vajraparyankasana) on a single lotus pedestal with a rectangular rim. The right hand holds a five-pronged diamond sceptre (vajra) vertically in front of the chest and the left hand resting on the left leg holds a prayer-bell (ghanta). Vajrasattva is clad with a cloth(dhoti) tied around his waist with a belt. He wears jeweled ornaments, namely a small three-pointed crown in front of the tall knot of hair (jatamukuta), a pair of circular earrings, two necklaces, ornaments at the upper arms, wrists and ankles, and the “investiture with sacred thread” (upavita). The image is encircled by a broad aureole (prabhamandala) decorated with rays, and the head is set off against a pointed aureole.

This image is the work of a Tibetan artist who had been inspired by contemporary sculptures of artists from Kashmir and Himachal Pradesh who have often been working for Tibetan patrons during the 11th and 12th century.
Vajrasattva
Tibetan Vajrasattva holds the vajra in his right hand and a bell in his left hand.
Vajrasattva (Dorje Sempa, Tibetan, Kongosatta, Japanese), (Jingang Satuo, Chinese), or Diamond Mind (see Vajra), is a buddha figure in the Mahayana and Vajrayana buddhist traditions. In Japanese Shingon buddhism, Vajrasattva is the name by which the bodhisattva Samantabhadra is referred after the practioner has received initiation into the “esoteric” or Vajrayana practices. In the initiation practices of Vajrayana Buddhism, many Buddhist figures assume different identities to signify their new form after initiation, complementary to the old form before initiation. In lineages of initiation such as Shingon Buddhism, Vajrasattva is also seen as the initiator of that lineage. Traditionally, Nagarjuna was said to have met Vajrasattva in a tower in South India, and was taught tantra by Vajrasattva, thus transmitting the esoteric teachings to historical figures.