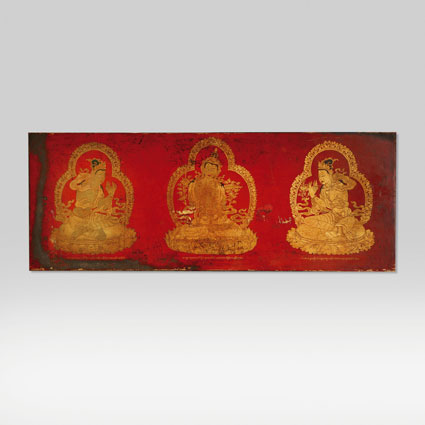 Manjushree, also written Manjushri, is the bodhisattva of keen awareness in Buddhism. A disciple of the historical Buddha Shakyamuni, he represents wisdom, intelligence and realisation, and is one of the most popular Bodhisattvas following Avalokitesvara (Ch: Guan Yin).Together with Shakyamuni and fellow disciple Samantabhadra he forms the Shakyamuni trinity (Jp: Sanzon Shaka). Manjusri is one of the Eight Wisdom Bodhisattvas and one of the Japanese Thirteen Buddhas. In Tibetan Buddhism he sometimes is depicted in a trinity with Avalokiteshvara and Vajrapani.Manjusri is mentioned in many Mahayana sutras, particularly the Prajnaparamita Sutras. The Lotus Sutra assigns him a paradise called Vimala, which according to the Avatamsaka Sutra is located in the east. His consort in some traditions is Saraswati. He is also sometimes called Manjughosha.Within Tibetan Buddhism, Manjushri is a tantric meditational deity or Yidam, and considered a fully enlightened Buddha. Manjusri MantraChanting the Manjusri Mantra "Om Ah Ra Pa Tsa Na Dhih" is believed to enhance wisdom and improve one's skills in debating, memory, writing, explaining etc. "Dhih" is the seed syllable of the mantra and is chanted with greater emphasis.A male Bodhisattva, he is depicted wielding a flaming sword in his right hand, representing his realisation of wisdom which cuts through ignorance and wrong views. The scripture supported by the flower held in his left hand is the Prajnaparamita, representing his attainment of ultimate realisation and Enlightenment. Variations upon his traditional form as Manjusri include Guhya-Manjusri, Guhya-Manjuvajra, and Manjuswari, most of which are Tantric forms associated with Tibetan Buddhism. The two former appearances are generally accompanied by a shakti deity embracing the main figure, symbolising union of form and spirit, matter and energy. ManchuAccording to legend Nurhaci, a military leader of the Jurchen tribes and founder of what became the Chinese imperial Qing Dynasty, believed himself to be a reincarnation of Manjusri. He therefore is said to have renamed his tribe the Manchu. YamantakaYamantaka (meaning “terminator of Yama i.e. Death”) is seen as a wrathful manifestation of Manjushri, the buddha of wisdom. Yamāntaka (Tibetan: Shinjeshe Wylie: Gshin-rje-gshed) is a Mahayana Buddhist yidam or iṣṭadevata of the Highest Yoga Tantra class in Vajrayana, popular within the Geluk school of Tibetan Buddhism. Role in Nepalese MythologyAccording to Swayambhu Purana, the Kathmandu Valley was once a lake. It is believed that Manjushri saw a lotus flower in the center of the lake and cut a gorge at Chovar to allow the lake to drain. The place where the lotus flower settled became Swayambhunath Stupa and the valley thus became habitable.
The Newars of the Kathmandu Valley, who adhere to both Buddhism and Hinduism, revere him as the Bodhisattva of Wisdom.