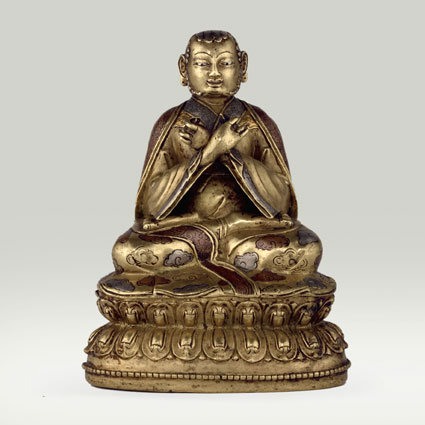 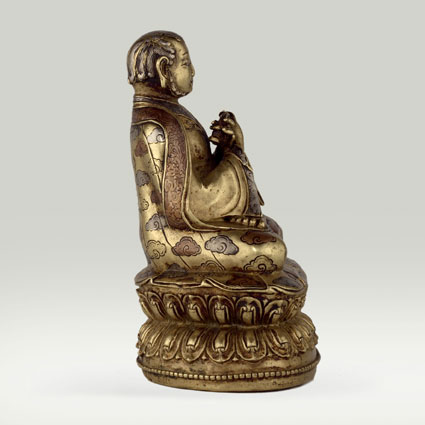 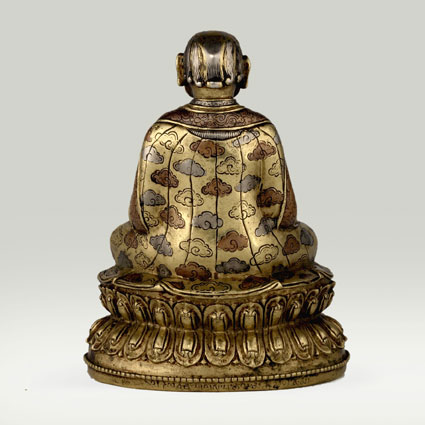 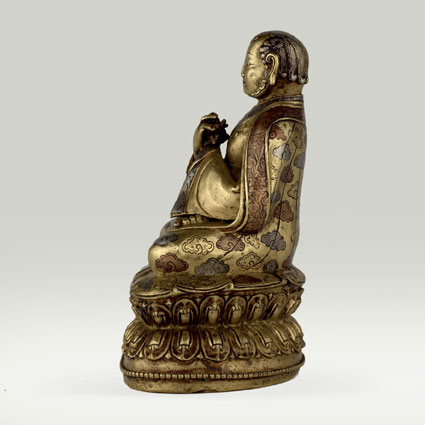 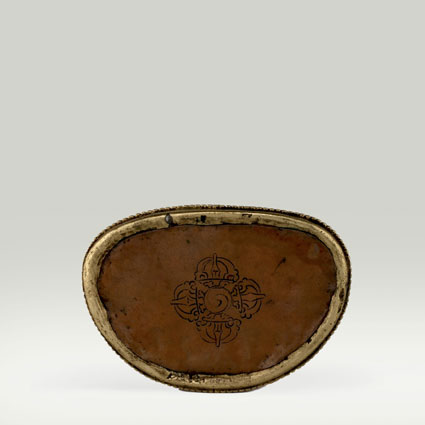 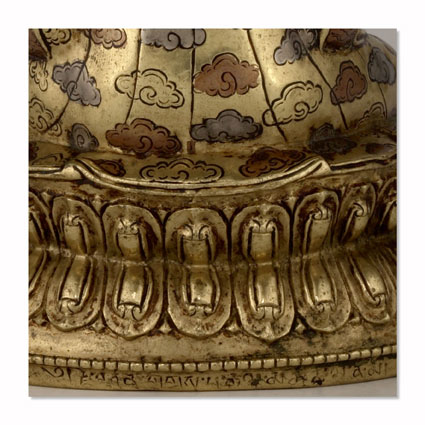 Description
Mythology
Iconography
Hollow cast in one piece.
The eyes are inlaid with "silver", the pupils filled in with a black lacquer-like substance, and the lips are inlaid with copper.
The monastic garments are extensively inlaid with "silver" and copper emblems and two segments with gold, the borders decorated with engraved floral patterns and the upper garment with clouds.
The bottom of the pedestal is sealed with a copper sheet decorated with the visvavajra emblem.

Grags pa rgyal mtshan (1147–1216), identified as such by an inscription, was the fifth throne holder (khri pa) of the Sa skya Monastery (1159–?). With facial expressions of a portrait like nature he is seated in the diamond attitude (vajraparyankasana) on a double lotus pedestal.  The hands are crossed over the chest and turned inwards (prajnalingabhinaya) holding a diamond sceptre (vajra) and a prayer-bell (ghanta). He is clad with a voluminous array of monastic garments.

On the back side of the pedestal is a Tibetan inscription in dBu can script: // lha btsun grags pa rgyal mtshan la na mo//. “Hail to lHa btsun Grags pa rgyal mtshan”.
Brief history of the Sakya Lineage and Order
Sakya is one of the four different sects of the Tibetan Buddhism. The Sakyapa tradition takes its name from the monastery founded in 1073 at Sakya (“the place of grey earth”) in south-western Tibet by Konchog Gyalpo, a member of the Khon clan. This influential family had previously owed allegiance to the Nyingmapa tradition but Konchog Gyalpo studied the theories and methods of the new diffusion of tantras current in eleventh century Tibet. The most important of the teachings, which he received from his teacher Drokmi Lotsava, a disciple of the Indian scholar Gayadhara, was the meditational system known as the Path and Its Fruit (Lam-‘Dre).
In the twelfth and thirteenth centuries, the Sakya tradition rose to a position of prominence in the religious and cultural life of Tibet. This was due largely to the endeavours of the five great masters:
1. Sachen Kunga Nyingpo (1092-1158)
2. Sonam Tsemo (1142-1182)
3. Drakpa Gyaltsen (1147-1216)
4. Sakya Pandita (1182-1251)
5. Chogyal Phakpa (1235-1280)

Sakya Monastery in India
The current Sakya Trizin, trone holder of the Sakyapa went in exil in India in 1959 and he is now living in Dehra Dun. As all the leaders of the Sakya school, he is married. He has two sons, and the younger ones, Dungsey Gyana Vajra, born July 5, 1979 in Dehra Dun, is a monk and direct the Sakya Monastery constructed in India.
Biography

Grags pa rgyal mtshan (1147–1216)- or rJe btsun rin po che Grags pa rgyal mtshan, was the fifth throne holder of the Sa skya monastery (Sa skya khri pa) (1159 – ?) and the third of the five “Supreme Ones of Sa skya” (gong ma lnga). It is traditionally believed that he received the instructions of the lam ’bras doctrine from Kun dga’ snying po (1092–1158) during a vision.