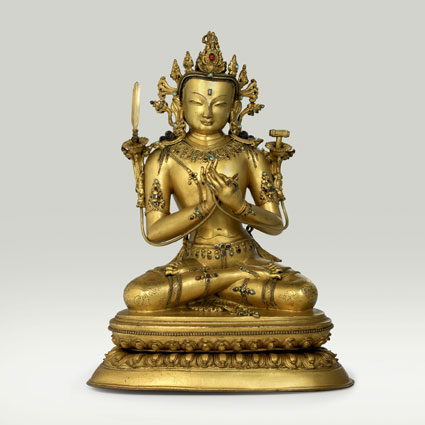 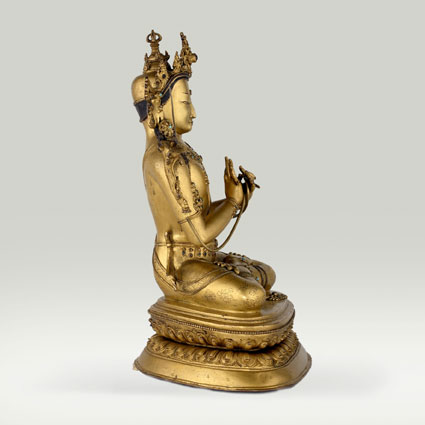 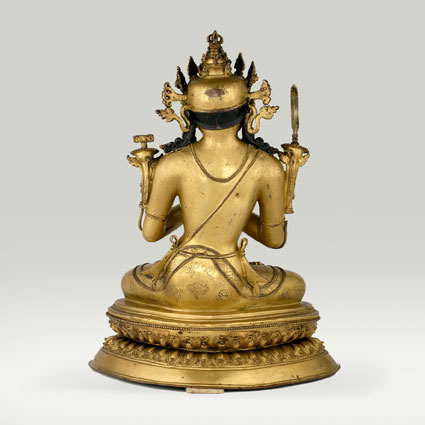 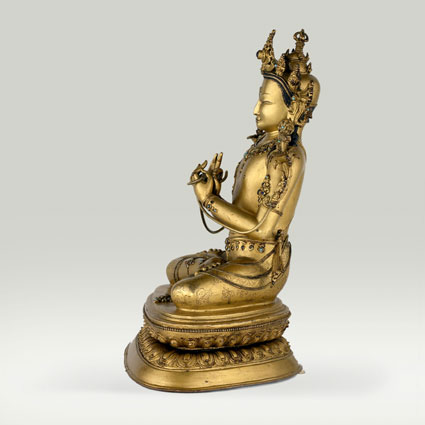 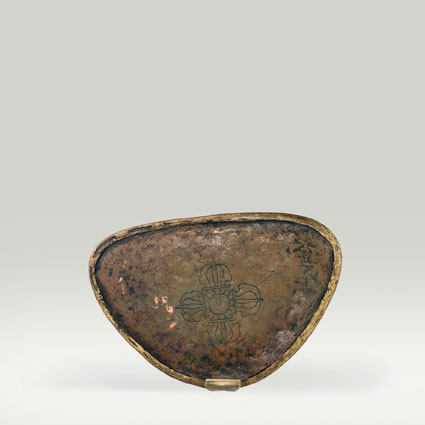 Hollow cast in two parts, with the lower section of the pedestal separate.
The lower edge of the crown is inlaid with "silver" and the sword at the right shoulder is cast in silver.
The ornamentation of the jewellery and the crown is worked with inset with turquoise, coral, lapis lazuli and one ruby in the centre of the crown.
The garment is decorated with engraved floral ornaments.
The hair is painted with a black pigment.
The bottom of the pedestal is sealed with a sheet of copper decorated with the visvavajra emblem.

Of all the metal alloys used for the casting of images in Tibet, it was the copper alloys which needed the most finishing work after the casting process. The jeweled ornaments of this image are especially fine worked. This Manjughosa was cast in Central Tibet latest by 1400.

Manjughosa (Tib. ’Jam pa’i dbyangs), a form of Manjusri (Tib. ’Jam dpal dbyangs), is seated in the diamond attitude (vajraparyaskasana) on a double lotus pedestal with an upper beaded border. The two hands each hold the stalk of a flower attached to the shoulders and form the “gesture of setting in motion the Wheel of the Law” (dharmacakra-pravartana-mudra). The two major attributes of Manjusri, the sword (khadga) and the manuscript (pustaka) of the Astasahasrika Prajnaparamita Sutra, are fixed to the flowers, which, according to the sadhanas of Manjusri should represent the blue lily (nilotpala). Manjusri is clad with a cloth tied around his waist with a belt. He wears princely ornaments, namely a helmet surmounted by a half vajra, a five fold crown, a pair of circular earrings, necklaces with attached pendants, bracelets at upper arms and wrists, finger rings, the “investiture with the sacred thread” (upavita) and ornaments at the anklets and the feet.

Of all the metal alloys used for the casting of images in Tibet, it was the copper alloys which needed the most finishing work after the casting process. The jewelled ornaments of this image are especially fine worked. This Manjughosa was cast in Central Tibet latest by 1400 AD.

The Sadhanamala (SM) contains seven descriptions of forms of  Manjusri (Tib. ’Jam dpal dbyangs) displaying the “gesture of setting in motion the Wheel of the Law” (dharmacakra mudra). Beside being named in all seven sadhanasVadiraj (SM  46–49, 51–52, 54), he is additionally named as: Manjughosa (SM 46, 48, 51–52); Manjusri (SM  46–47, 49, 54); Dharmadhatu-Vagisvara (SM  46, 51); Manjuvajra (SM4 7, 54); Vadinatha (SM 47); Manjukumara (SM 47); Vadiraja (SM 48); Manjunatha (SM  48, 51); Manjuvara (SM 48, 54); Vagisvara (SM 52). In this publication, individual images of Manjusri displaying the dharmacakra mudra are labelled as Manjughosa (Tib. ’Jam pa’i dbyangs), regardless whether shown in the diamond attitude (vajraparyanka) or in the noble attitude(sattvaparyanka). When seated in the attitude of ease (vamardhaparyanka) on a lion he is named Vadisimha Manjusri (Tib. ’Jam dbyangs smra seng).
Manjusri: alternate name: Vajrananga Manjughosa
(From Wikipedia, the free encyclopedia)