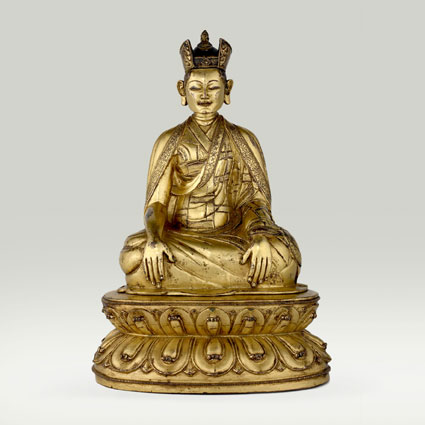 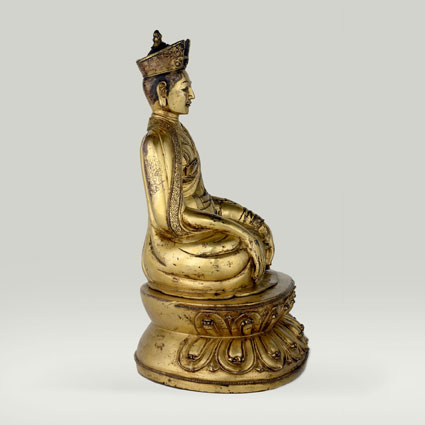 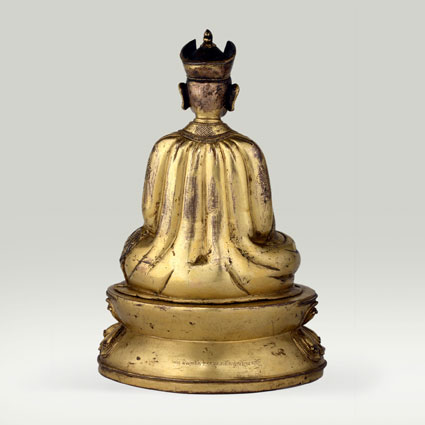 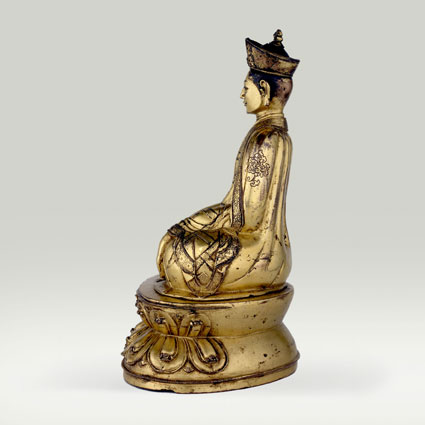 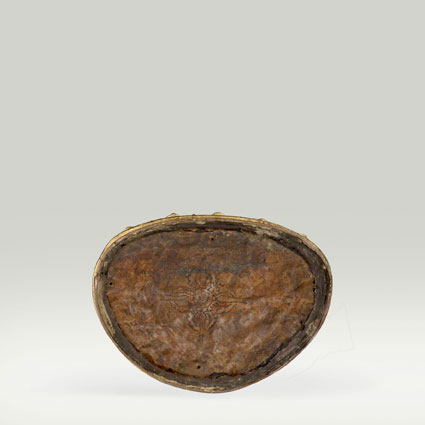 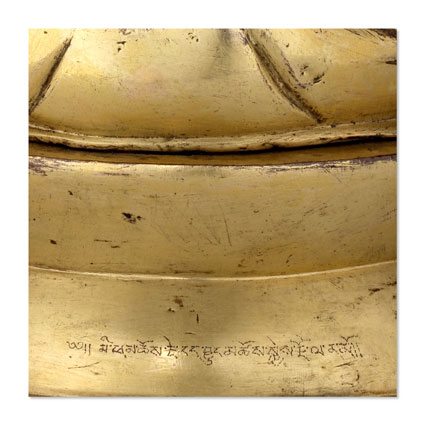 Hollow cast in two parts.
The borders of the garments are decorated with engraved floral textile patterns.
The bottom of the pedestal is sealed with a copper plate decorated with the visvavajra emblem.

Rang byung rdo rje (1284–1339), the third Zhwa nag (“black hat”) Karma pa is seated in meditation attitude on a double lotus pedestal. He extents both hands to the front and he is clad with several layers of heavy garments covering both shoulders and wears the typical hat.

On the back of the pedestal is a Tibetan inscription in dBu can script:

This image date from about the 16th century which is a clear indication that this image was obviously not cast during his life time.
Biography

Born to a family of a tantric practitioners of the Nyingma lineage in Dingri Langkor, in the Tsang region of Central Tibet, Rangjung Dorje sat up straight at the age of three and proclaimed that he was the Karmapa. At the age of five, he went to see Orgyenpa, who had prepared for his visit on the basis of a prescient dream. Orgyenpa recognized the child as the reincarnation of Karma Pakshi and gave him the Vajra Black Crown and all the possessions of the second Karmapa.

Master Of All Buddhist Traditions Of Knowledge
Rangjung Dorje grew up in Tsurphu, receiving the full transmissions of both the Kagyu and Nyingma tradition. At the age of 18 (1301), he received the preliminary monastic ordination. After a retreat on the slopes of Mt. Everest, he took full ordination, and further broadened his studies at a great seat of the Khadampa lineage. Not content with this, Rangjung Dorje sought out and studied with the greatest scholars and experts of different traditions of knowledge, learning from all Buddhist traditions of the time. By the end of his studies, he had learnt and mastered nearly all of the Buddhist teachings brought to Tibet from India.

Founder Of The Karma Nyingthik
In particular, during a retreat in his early twenties he had the vision at sunrise of Vimalamitra and then Padmasambhava, who dissolved into him at a point between his eyebrows. At that moment, he realized and received all the teachings and transmissions of the dzogchen tantras of the Nyingma lineage. He wrote many volumes of teachings on dzogchen and founded the Karma Nyingtik lineage. Through his mastery of the profound Nyingmapa teachings of Vimalamitra, he unified the Kagyu mahamudra and the Nyingma dzogchen.

At the age of 35 (1318), through visions he received of the "Wheel of Time" (Kalacakra) teachings, he introduced a revised system of astrology, which continues to this day called the "Tsur-tsi" or the Tsurphu Tradition of Astrology, and which forms the basis for the calculation of the Tibetan calendar in the Tsurphu system. He also studied and mastered medicine, which is in part related to astrological studies in the Tibetan system.

Over the course of his life, Rangjung Dorje also wrote many treatises, including the universally renowned Profound Inner Meaning (Zab mo nang don), one of the most famous Tibetan treatises on Vajrayana.
The Karmapa established many monasteries in Tibet and China. He visited China in 1332, where he enthroned his disciple, the new emperor, Toghon Temur. Rangjung Dorje later passed away into parinirvana in China. It is said his image appeared in the moon on the night of his passing.

Among his many disciples, some of the main ones were Khedrup Drakpa Senge, Dolpopa, Yakde Panchen, and many others, and in particular the one who was to become the next lineage holder, Gyalwa Yungtonpa.

Gyalwa Yungtönpa(1296-1376)
Gyalwa Yungtön Dorje Pal, was born into a family of Nyingma tantric practitioners at Tsongdu Gurmo, in Southern Tibet, in the Wood Snake year. He was named Dorje Bûm. From an early age, he started to study the five sciences and developed incomparable knowledge in sutra and tantra. Most of his studies were at Shalu. He received the Do-gyu-sem-sum, teachings on Mahayoga, Anuyoga, and Atiyoga of Dzogchen from Zur Champa Senge. He then received the Yamantaka cycle of teachings and abhisheka from Shangpa Shakbum. He studied and practiced hard under many masters and became one of the most respected and renowned teachers of the time.

Gyalwa Yungtönpa made great contributions of material offerings to Sakya, Trophu, Shalu, and Sangphu. At the request of his mother, he accepted a consort and when the first child was born, he asked permission from the family and received monastic ordination. He was named Dorje Pal. He then met the Third Karmapa Rangjung Dorje and received all the key instructions and transmissions of the lineage in full and attained highest realization. He practiced in Tibet and also in Paro, Bhutan for years.
He composed a text differentiating the views of buddhahood in Sutra and Tantra and impressed and outshined many great scholars of the time, such as Yakde Panchen, who became his students. He manifested as a hidden yogi and benefited many sentient beings. At the age of eighty-two, in the Wood Snake Year, he passed into parinirvana with many great signs of realization.

Among countless students, his main disciple and lineage holder was the Fourth Karmapa, Rolpe Dorje.

(Pawo Rinpoche said that there are short and longer versions of autobiographies of this master. These details about Gyalwa Yungtönpa are compiled from Pawo Tsuklak Trengwa's Feast For Scholars (chos 'byung mkhas pa'i dg'a ston), Beijing edition, vol. 2, pp. 948-950).