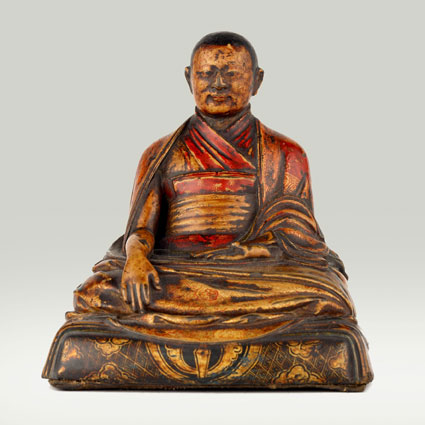 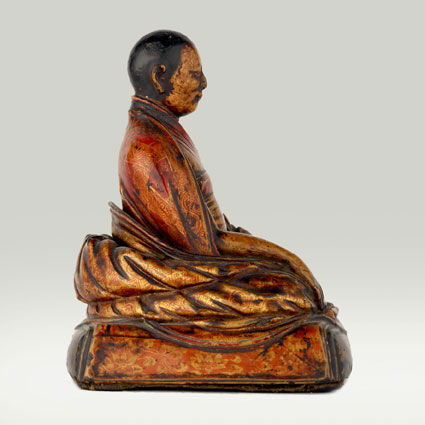 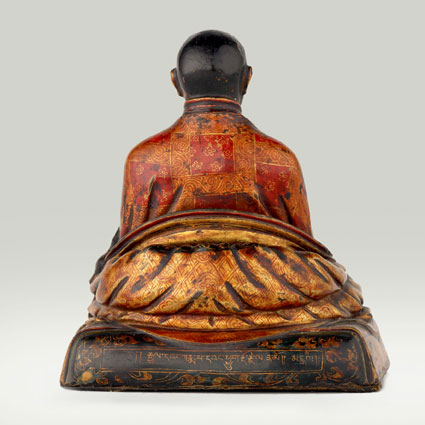 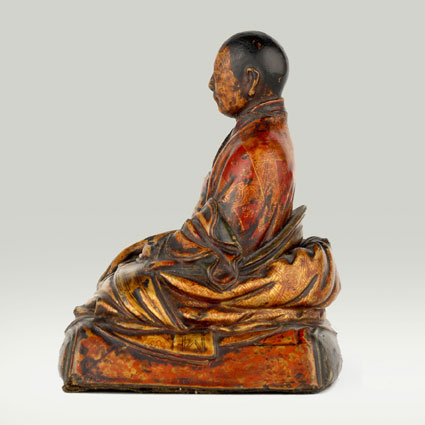 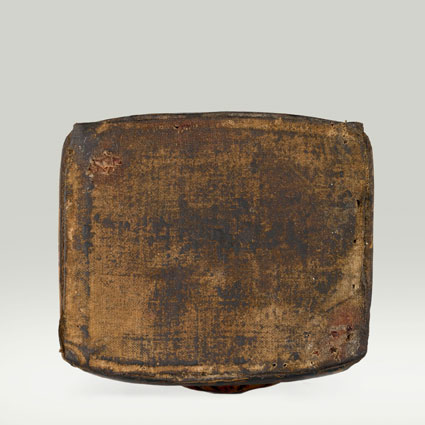 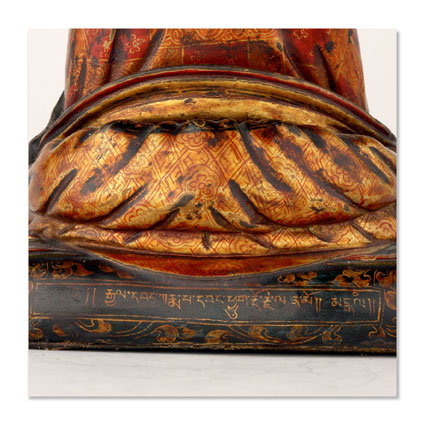 Hollow carved from one piece, with painted decoration.
The bottom of the hollow carved pedestal is sealed with a piece of wood.

This wood statue represents dBang phyug rdo rje (1556–1603), the ninth Zhwa nag (“black hat”) Karma pa is seated in meditation attitude on a rectangular pedestal covered with a cloth decorated in front with a five-pronged diamond sceptre (vajra) emblem. He rests the left hand in the lap and extents the right hand in the gesture of touching the earth (bhumisparsa-mudra) and he is clad with several layers of heavy garments covering both shoulders.
It must also be pointed out that several of the Karmapa were accomplished sculptors and painters.

The fact that the Karma pa is shown seated on a cushion is an indication this statue was commissioned during his life time (died 1603 AD). In Tibet only deceased monks are usually represented with lotus pedestal.

Khenpo Chodrak Rimpoche who examined this statue on the 23rd of May 2003, stated that this statue was carved by Chos dbings rdo rje("chöying dorje"), the Tenth Karma pa ("karmapa").
Biography

Wangchuk Dorje (1556 - 1603) – The Ninth KarmapaThe Ninth Karmapa, Wangchuk Dorje, wrote three mahamudra treatises which have played a major role in Tibet on the teaching and transmission of mahamudra (from the thangka collection of HH the Gyalwang Karmapa).
As predicted by the eighth Karmapa, the ninth was born in the Treshö region of eastern Tibet. He was heard reciting mantras in the womb during pregnancy and he, too, sat cross-legged for three days soon after birth and declared he was the Karmapa.In accordance to the prediction letter left by the eighth Karmapa, he was soon recognized by the Tai Situpa Chökyi Gocha, who was staying not far away, and by the Sharmapa Konchok Yenlak. A year later, Shamarpa enthroned him at the age of six and gave him extensive teachings. Once Wangchuk Dorje had received the complete Kagyu transmission, he began to teach throughout Tibet, traveling in a monastic camp, which strictly emphasized meditation practice. Wangchuk Dorje did not visit China but made important trips to Mongolia and Bhutan. He gave many teachings and restored monasteries and temples wherever he went.The ninth Karmapa also received an invitation to visit Sikkim and under his guidance, established three monasteries in Sikkim: Rumtek, Phodong, and Ralang. The Karmapa blessed and consecrated them from Tibet. Rumtek subsequently became the seat of the Karmapas in India in the early 1960's. Like the eighth Karmapa, Wangchuk Dorje was also a creative author and wrote many condensed commentaries on sutras and tantras, including three mahamudra treatises: The Ocean Of Definitive Meaning, Dispelling The Darkness Of Ignorance, and Pointing Out The Dharmakaya. These treatises have played a major role in Tibet for the teaching and transmission of mahamudra.At the age of 48 he passed into parinirvana, leaving his prediction letter along with instructions about the next incarnation to the sixth Shamarpa Chökyi Wangchuk.

Chökyi Wangchuk(1584-1629)Chökyi Wangchuk was born in Drikhung area of Central Tibet and the Ninth Karmapa enthroned him as the Sixth Shamar incarnation. From an early age, he followed and studied with the Ninth Karmapa and received the full transmission of the Kagyu lineage. He became one the most renowned Panditas of the time, in Sutra and Tantra, composing many commentaries. He was the teacher of Desi Tsangpa, who ruled Central Tibet at that time. He rebuilt the monastery in Kampo Neynang. He also traveled extensively to China and Nepal. He taught Buddhism in the original Sanskrit to the king, Laxman Naran Singh, in Nepal and to other devotees. He eventually passed away in the mountains of Helambu, Nepal. He passed on the lineage teachings to the Tenth Karmapa.He traveled to Kham, in eastern Tibet, and recognized and became the principal teacher of the Tenth Karmapa Chöying Dorje. (These details about Chökyi Wangchuk are compiled from Karma Gyaltsen's book called kam tshang yab sras dang dpal spungs dgon pa, Szechwan edition, p. 135).