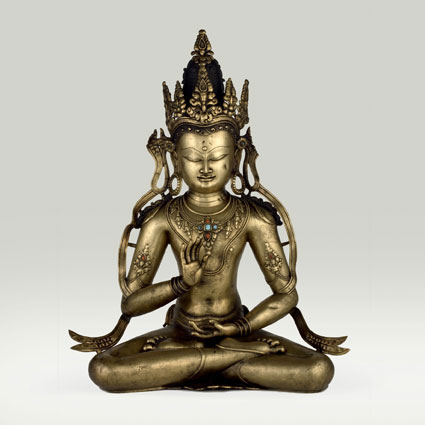 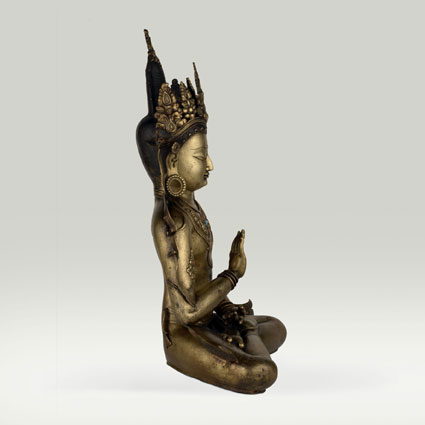 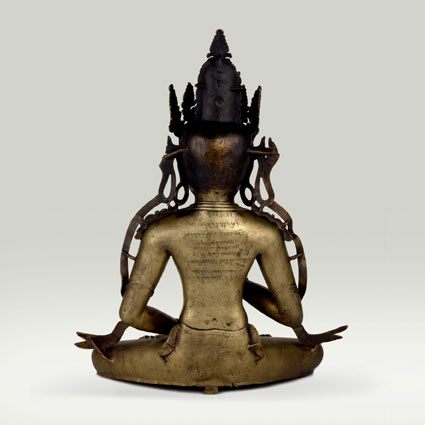 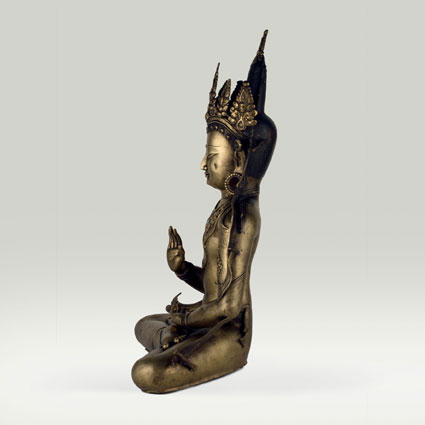 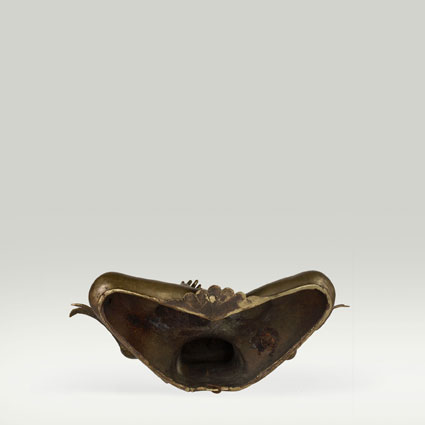 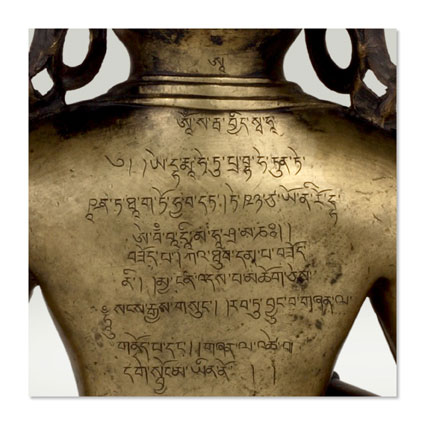 Hollow cast in one piece.
The separately cast pedestal is lost.
Decorated with engraved textile patterns.
The jewelled ornaments are partly inset with turquoise and coral.
The face has traces of painted cold gold and the hair remains of a blue pigment.

The crowned Amoghasiddhi (Tib. Don yod grub pa), which might at one time formed part of a group of the five Tathagatas, is seated in the diamond attitude (vajraparyankasana). He shows with the raised right hand the gesture of fearlessness (abhaya-mudra) and rests the left hand in the lap. The Buddha wears a decorated shawl carried over the left shoulder and tied across the waist. He is decorated with the ornaments of a crowned Buddha, namely a five-pointed crown in front of the tall knot of hair surmounted by the “wish-granting jewel” (cintamani), an intricately worked necklace with attached pendants, ornaments at the upper arms and the wrists, and anklets. The Buddha is encircled by a ribbon-like scarf.

On the back of the head and neck is a vertical Sanskrit mantra inscribed in Tibetan dBu canscript: // OM A· HUM //. On the back is a Sanskrit inscription in dBu can script of the Buddhist creed: // Om sarba bjid svaha / Ye dharma hetu prabhava hetu(n)m tesan(m) tathagato hy ab(v)adat tesam ca yo nirodha evamb(v)adi maharramanau //.

Qualities Arising from Transforming Negative Emotions
We have given a brief description of the five dhyana buddhas who represent the purified qualities of the five disturbing emotions. When these five negative emotions are purified, the qualities of the five buddhas shine forth purely.
Buddha Amogasiddha Buddha Amogasiddha is realization of all-accomplishing wisdom. The Tibetan word for Buddha Amogasiddha is sangay donyodtrubpa. The word danyodmeans “meaningful” and the word trubpameans “accomplishment.” So Buddha Amogasiddha means “whatever is meaningful and fruitful is accomplished.” He is also the complete purification of jealousy, which is a hindrance for both material and spiritual success. His activity is perfect accomplishment and fulfillment of meaningful aims. Furthermore, his activity removes ordinary daily hindrances such as illnesses and obstacles. This is why Ratnasambhava’s activity is meaningful accomplishment.
Buddha Amogasiddha holds a double-vajra in the form of a cross in his left hand, which symbolizes that his activity pervades and touches all directions. He sits in the full lotus posture. The left hand of all five dhyana Buddhas rests in the meditative posture of the changeless realization of dharmata. Amogasiddha’s right hand is in the mudra of fearless protection. He protects all living beings from any mishaps, obstacles, and negative influences. So his posture is known as “the mudra of fearless protection.” He is white which represents “without fault” and he rests in the center to the mandala and is on a lion’sthrone. Amogasiddha is green and resides in the north holding a sword representing the cutting of existence.