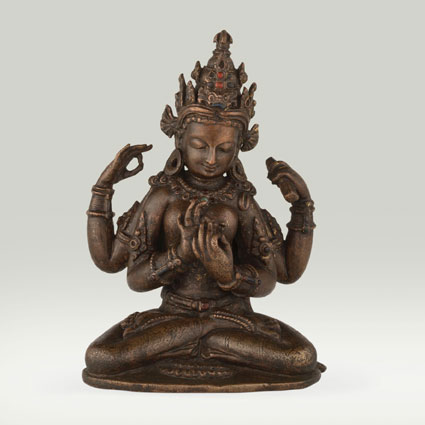 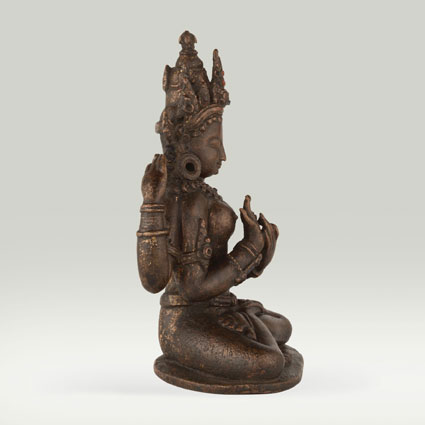 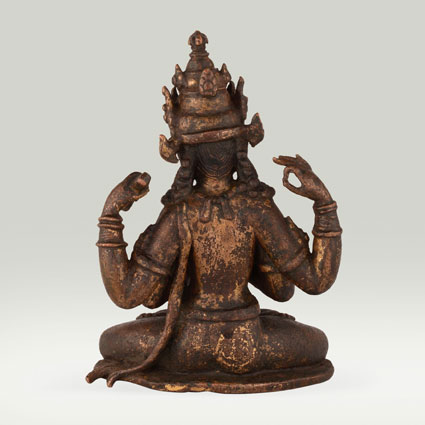 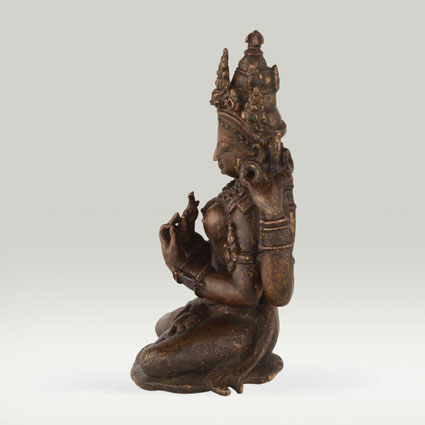 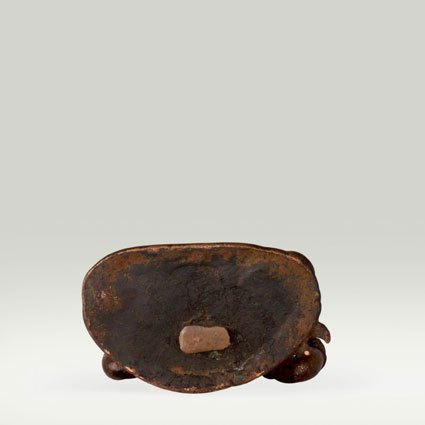 Copper with some traces of gilt, solid cast in one piece.
The separately cast lotus pedestal is lost.
The jewelled ornaments are inlaid with precious stone, some of which are lost.
The garment is decorated with engraved ornaments.

The four-armed goddess, identified as Prajnaparamita (Tib. Shes rab kyi pha rol tu phyin ma), is seated in the diamond attitude (vajraparyankasana) on a stand originally mounted upon a lotus pedestal. The principal hands display the “gesture of setting in motion the Wheel of the Law” (dharmacakra-pravartana-mudra). The uplifted right hand originally held a rosary (aksasutra) and the left hand the manuscript (pustaka) of the Astasahastrika Prajnaparamita Sutra. Prajnaparamita is a personification of the Astasahastrika Prajnaparamita Sutra which represents her traditional attribute in the shape of a manuscript.

This image does not match any of the descriptions of the four-armed forms of Prajnaparamita listed in the Sadhanamala (SM 156) or the Nispannayogavali (NSP 21). However the Dharmakosa-samgraha (DKS) contains several sadhanas which correspond with the illustrated image (DKS, fol. 28A, 34B, 37A–37B, 85A).
Prajnaparamita
Perfection of Wisdom -
"Perfection of Wisdom" is a translation of the Sanskrit term prajna paramita (Devanagari:
Tibetan: Shes-rab-pha-rol-phyin
Chinese: Pinyin: ban'ruo-boluomìduo
Japanese: hannya-haramitta, hannya-haramitta?)
Korean: banya-paramilda
Vietnamese: Bat Nha Ba La Mat Da)
- which is one of the aspects of a bodhisattva's personality called the paramitas.