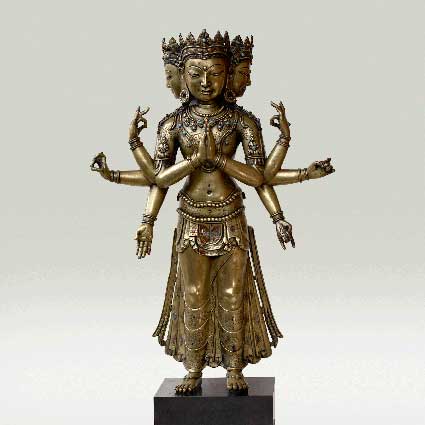 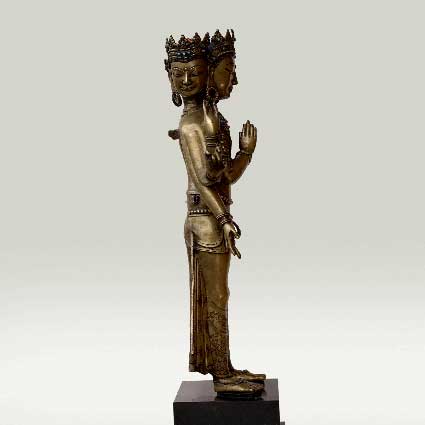 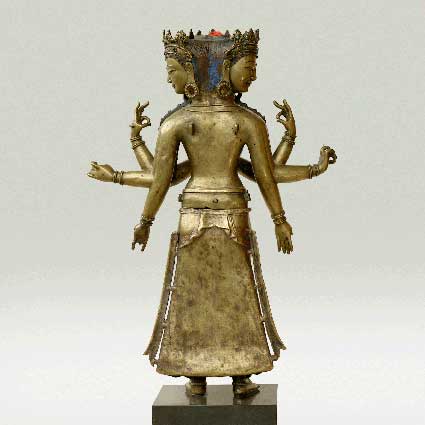 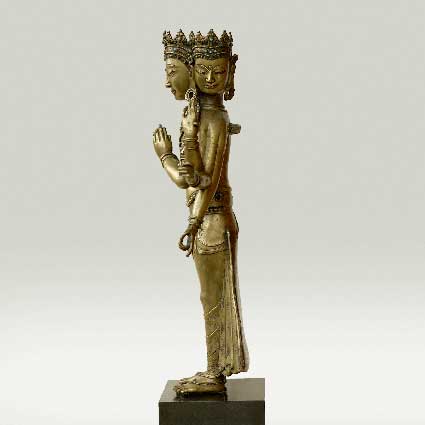 See it in the Museum
Chapel
Orientation 5
Plinth 4

Hollow cast in two parts.
The separately cast pedestal and the upper part of the heads are lost.
The image is extensively inlaid with "silver" and copper, and the garment decorated with engraved ornaments.

This is the form of Avalokitesvara known as Ekadasamukha Avalokitesvara or “Eleven-headed Avalokitesvara” (Tib. sPyan ras gzigs bcu gcigs zhal). He is shown fully upright in symmetrically standing attitude (samapadasthanaka). The principal pair of hands display the gesture of perfect salutation with the hands joined, but slightly hollowed (anjali-mudra). The remaining three pair of arms are evenly distributed in a circular shape. Avalokitesvara is clad with a precious cloth tied in a very decorative manner around the waist with a belt with beaded borders. The garment is profoundly decorated with patterns indicated by inlaid pieces of "silver" and copper, and in addition to engraved ornaments. He wears an engraved translucent shawl placed upon both shoulders. Avalokitesvara wears princely ornaments composed of five fold crowns, circular ear-pendants, three beaded necklaces, ornaments on upper arms, bracelets and anklets. The eyes and urna of all three heads are inlaid with "silver" and the lips with copper, as are the nails and sections of the crowns. The jewelled ornaments are inset with numerous circular pieces of blue turquoise and red coral.

This large and imposing image of Avalokitesvara represents a work created in the Western Himalayas. The stylistic features combine a strong masculine body which recalls earlier works of Kashmir origin and a subtle echo of the North-Eastern Indian Pala tradition. The Pala traditions of sculpture and painting had a lasting influence on the whole Mahayanist world between the 8th and 12th centuries - including Tibet.
Avalokitesvara
(From Wikipedia, the free encyclopedia)