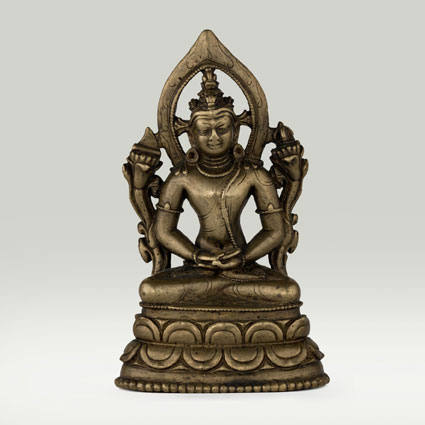 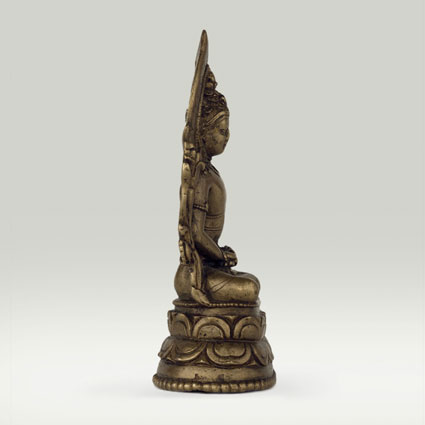 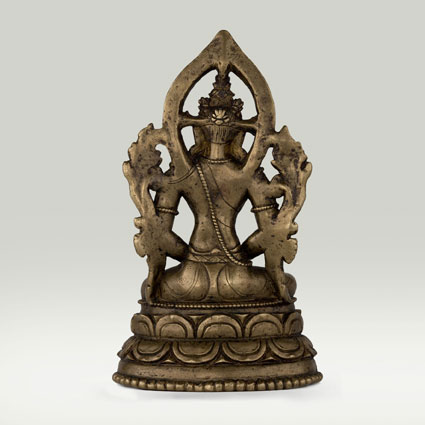 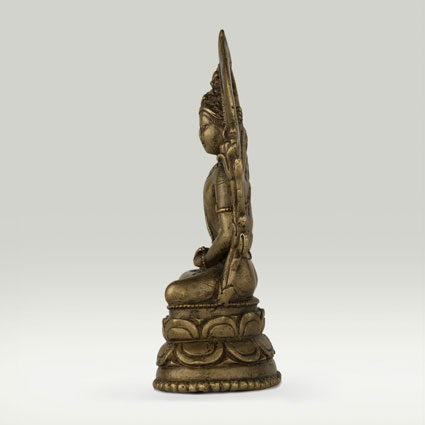 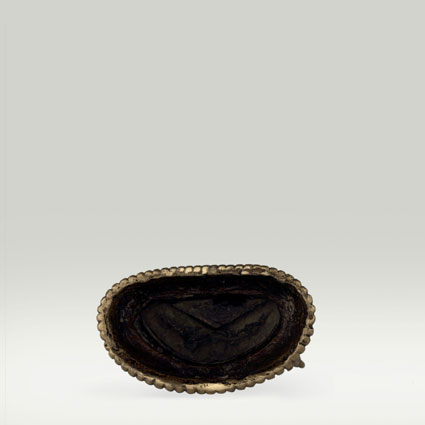 Description
Iconography
Hollow cast in one piece.
The garments and jewelled ornaments are decorated with engraved ornaments.
The bottom of the pedestal is not sealed.

The male deity is seated in the diamond attitude (vajraparyankasana) on a double lotus pedestal and displays the gesture of meditation (samadhi-mudra). The two flowers at the shoulder level, which according to the sadhanas of Manjusri should represent the blue lily (nilotpala), are decorated on the left side the manuscript (pustaka) of the Astasahasrika Prajnaparamita Sutra and on the right side with half of a diamond sceptre (vajra).

At least three different two-armed deities displaying the gesture of meditation (samadhi or dhyana mudra) have to be distinguished, with two of them described in the Sadhanamala (SM): Amitabha (red) (SM 66, 68), with the characteristics of a crowned Buddha; Dharmasankha - samadhi Manjusri (white) (SM 64, 81), with characteristics of a Bodhisattva, often distinguished by a particularly shaped necklace; Vairocanabhisambodhi (Tib. rNam par snang mdzad mngon par byang chub) (white), with the characteristics of a crowned or uncrowned Buddha, the chief deity of the Karunagarbha Mandala of the Vairocanabhisambodhi (?) and the Vajradhatu Mandala of the Sarvatathagatatattvasamgraha Sutra (?). The identification of this image as Dharmasankha-samadhi Manjusri is based on the manuscript (pustaka), a distinct emblem of Manjusri. It should also be pointed out that the crowned forms of Amitabha (Tib. ’Od dpag med) usually do not carry a shawl over the left shoulder and tied around the chest.
Manjusri :  alternate name: Vajrananga Manjughosa
(From Wikipedia, the free encyclopedia)