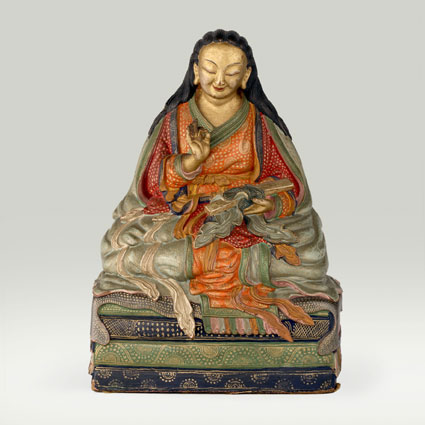 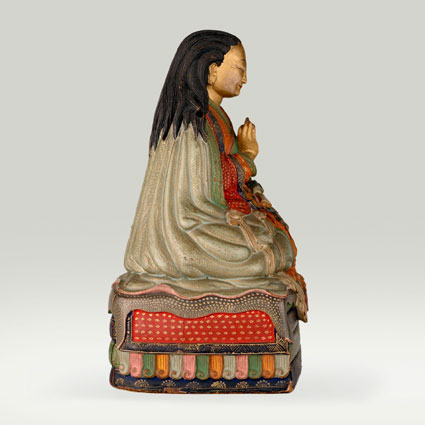 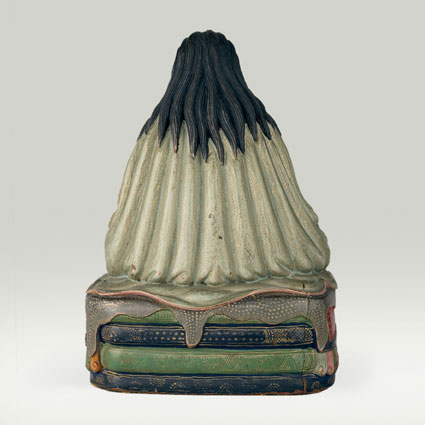 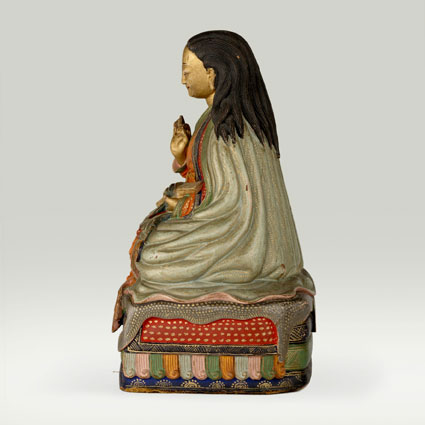 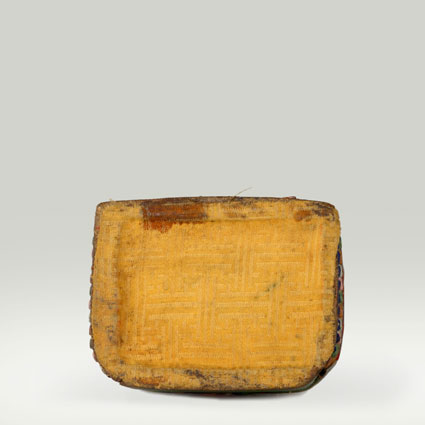 Solid carved from one piece and covered with painted decoration.

Marpa (1012–1097) the founder of the bKa’ brgyud («kagyü») tradition, and the principal teacher of Milarepa (1040–1123). Marpa is never shown clad in monks garment, but usually in the voluminous garments of a lay tantric master.

The monk is seated in the diamond attitude (vajraparyankasana) on a rectangular pedestal covered with the skin of an animal. He is clad with several layers of garments covering both shoulders. The right hands is uplifted in the gesture of argumentation (vitarka-mudra), and the left hand holds a manuscript (pustaka).
Biography

Marpa (1012-1097)
Marpa travelled to India from Tibet at great personal peril across the Himalayas to study with his principal teachers, Naropa and Maitripa.
Marpa Chökyi Lodrö, was born in Lhodrak Chukhyer to a well-to-do family. He began studying at a young age and was wild and untamed compared to other children. Marpa first received training for three years at Mangkhar with Drokmi Shakya Yeshe and mastered the Sanskrit language. He decided to travel to India to study dharma with renowned Indian buddhist masters. Marpa returned home to Lhodrak and converted his entire inheritance into gold for his travel expenses and to make offerings to his Indian gurus for requested teachings.

Journeys to India
Marpa set out on his journey to India. Arriving first in Nepal, he studied with Paindapa and Chitherpa, two famous students of Naropa.
Later, Paindapa accompanied Marpa to Pullahari, near Nalanda University, where Naropa taught. Marpa spent twelve years receiving abhishekas, instructions, and studying with Naropa and other great Indian gurus to whom Naropa sent him to study or receive instructions. At the end of twelve years, Marpa offered a ganachakra and sang his first song of realization to his guru, Naropa. Shortly after, he set forth on his journey back to Tibet, where he taught and continued his dharma activities.

Subsequently, Marpa traveled to India two more times and studied with Naropa and other great mahasiddhas of India. Of these, his main gurus were Naropa and Maitripa. In total, he traveled three times to India and four times to Nepal. On his third visit, Marpa went through an adventure in finding Naropa, because Naropa, having already entered into the tantric conduct, was nowhere to be found. However, with determination, trust, and devotion, Marpa managed to find Naropa and receive the final teachings and instructions from him. At that time, Naropa prophesied that a family lineage would not continue for Marpa, but that his lineage would be carried on by disciples – especially one with the appearance of a monk and the inner realization of Mahayana. This prophecy foretold of the arrival of Lord Gampopa