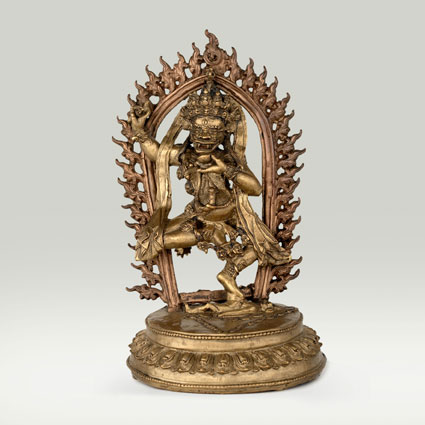 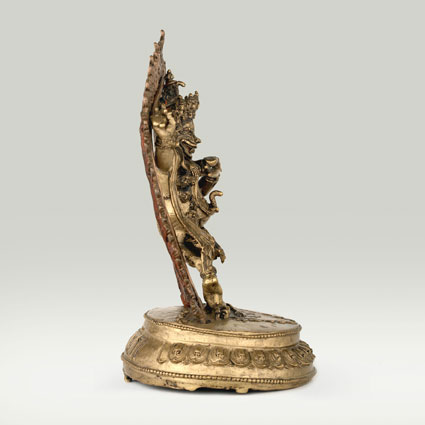 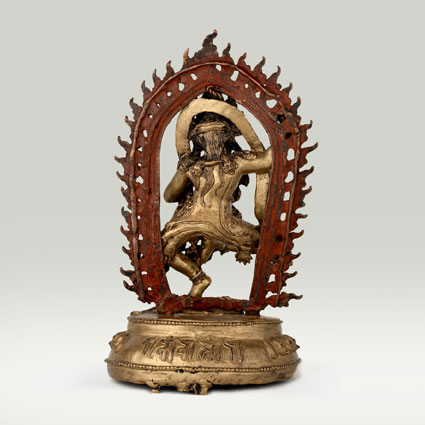 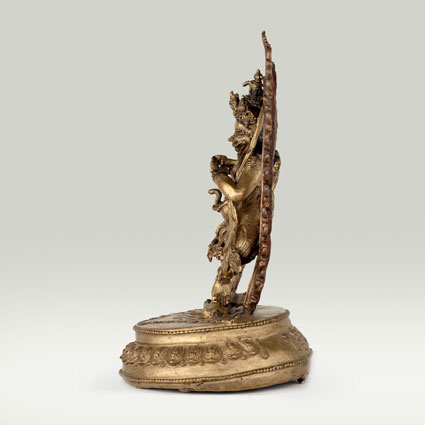 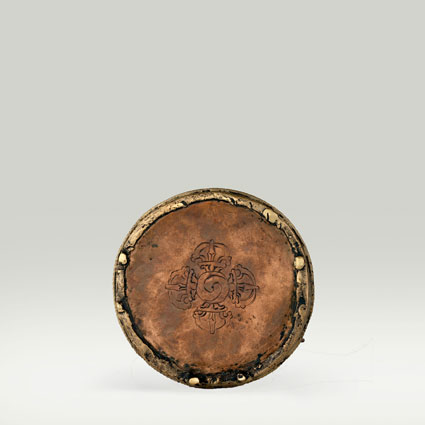 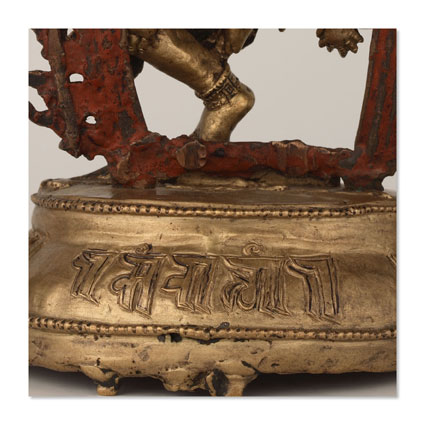 Brass image and copper nimbus; partly hollow cast in two parts.
The hair with traces of a red pigment.
The back of the open-worked flaming aureole is painted with a red lacquer.
The bottom of the pedestal is sealed with a sheet of copper decorated with the visvavajra emblem.

The goddess, identified as the Red Simhamukha (Tib. Seng gdong ma dmar mo), dances with her left foot (pratyalidha) on a corps lying on a circular lotus pedestal within a Yantra with flaming borders, placed upon a circular single lotus pedestal. The goddess, which is a form of Jnana-Dakini, wears a tiger-skin loin cloth and a scarf of human and elephant skin combined. She is crowned with skulls and adorned with snakes, bone ornaments, and wears a garland of several heads (mundalama). She wields with the raised right hand a ritual choppper with a vajrahandle (vajrakartrika); in her left she holds a skull-cup (kapala).
The ceremonial staff (khatvanga) originally held in the crook of the elbow is lost. She is encircled by a ribbon-like scarf, its brownish copper in contrast to the yellowish brass of the statue.

The back of the pedestal carries a short Sanskrit mantra written in Lancana, a variation of the Devanadari script used almost exclusively by the nepalese Buddhists. The inscription together with the red lacquer painted at the back of the aureole are a clear indication, that this image was commissioned by a Tibetan patron.
Hindu legendEvery Hindu temple has the face of lion at the apex entrance carved artistically. This lion-face appears at the top of the door, niche, and windows as well. The countenances of man and lion are fused, and it is also known as Simhamuka or Simhalalata. It is supposed to lead worshippers to Supreme Reality.

Simhamukha usually indicates Rahu (eclipse). One of the nine planets, Rahu stands for a devourer. There is a Puranic story. During the fight between gods and demons for nectar or Amrita, Rahu, the demon, tried to get a sip of drink of immortality, stealthily. But he was caught in the nick of time by the Surya (the Sun God) and Chandra (the Moon God) and Lord Vishnu was informed instantly. He cut off Rahu's head. But the head became immortal, having tasted a drop of nectar. Rahu now tried to swallow Sun and Moon when they passed near him. During eclipses (grahana), this scene is repeated according to believers.Rahu is son of Simhika or the lioness. She symbolizes destruction. Incarnation of Narasimha has this concept behind it. The earliest carving of Kirtimuka or Simhamukha is noticed in the stupa at Amaravati (2nd century C.E.) Dancers of Cambodia use Kirtimuka as headdress. Artifacts and any worship-worthy idols or mandaps carry this symbol.
Simhamukha (tib.:sen-ge’i gdong ma or Senge-dong-chen)
Senge dongma

Simhamukha – the Lion-Faced Dakini
Simhamukha is regarded as one of the principal fierce manifestations of Padmasambhava. As such, she is connected with many ceremonies of the Dzogchen tradition. A fierce dakini, she is also one of the Bardo Thödol's Phramenma; a group of female deities. When fully appreciating the benefits of this wrathful wisdom deity (according to the Nyingmapa tradition), she is the principal Dakini teacher of Padmasambhava.

* "Out of the immensity of the dharmadhatu, the mother of all the Buddhas You arise as chief of all the innumerable Dakinis; With your magical power and shakti pulverising obstructing spirits-Homage to the Dakini Senge Dongma."

Simhamukha is usually depicted as dark blue – or, a maroon, smoke – or wine-coloured lioness associated with the direction East. As she is Simhavaktra too, this goddess is also an attendant of Lha-Mo, in which case she is depicted as carrying both a kapala and a kartrika.

Tibet
"Arising from the state of the dharmadhatu, Mother of all conquerors, Queen of all the countless dakinis; With magic powers smashing to dust hindrances and enemies. Homage to Simhamukha." (Nyingma liturgical verse).

Within the Nyingma School, of the two divisions of Kama (Oral Teachings) and Terma (Revealed Treasures), Simhamukha belongs to the Terma. From the three general divisions of Terma: Root, Branch and Essence, Simhamukha belongs to the Dakini Cycle within the Root Terma class. Generally, she is regarded as the secret form of Guru Rinpoche Padmasambhava. In the Sarma Tradition the deity Simhamukha is found in the Chakrasamvara Cycle of Tantras and although similar in name and appearance is unrelated.
The dakini Simhamukha is a tutelary deity arising out of the Chakrasamvara cycle of Tantras and belongs to the Anuttarayoga “wisdom” classification. The Sarma tradition Simhamukha is unrelated to the deity of the same name and appearance in the Nyingma “terma” (treasure) traditions. In that tradition, of the many forms of Padmasambhava, Simhamukha is a secret form of Guru Rinpoche.