Two-armed form of Mahakala - the "Great Black One" 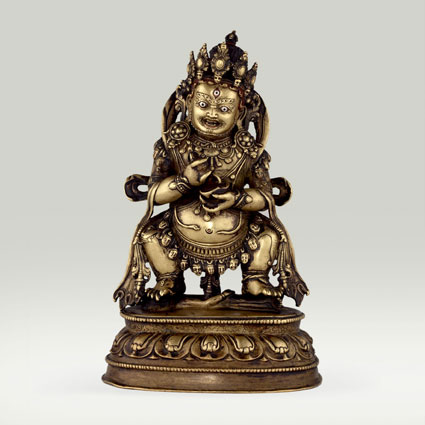 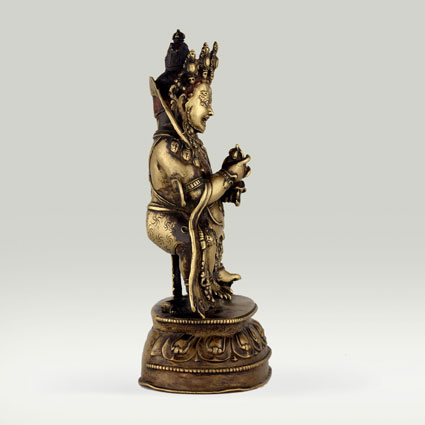 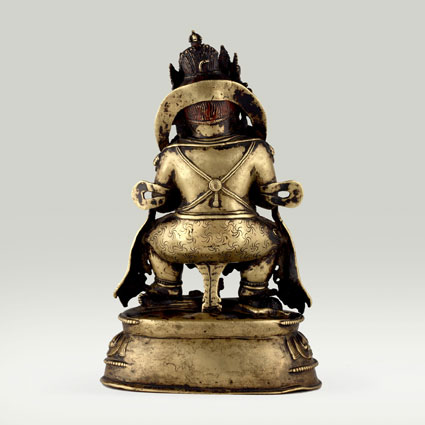 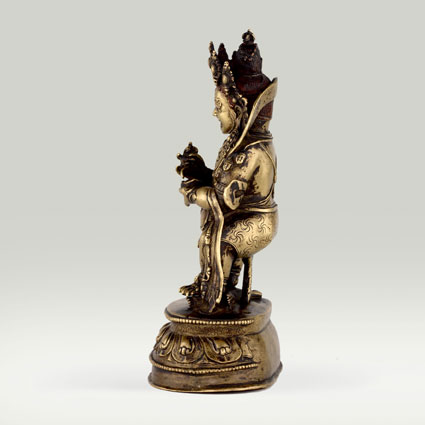 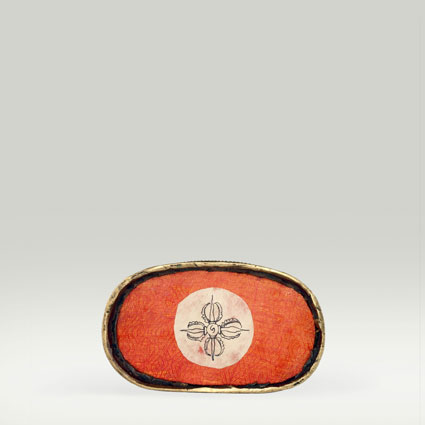 Hollow cast in two parts.
The three eyes are inlaid with ‘silver’ and copper, the pupils filled with a black lacquer-like black paint.
The lips are inlaid with copper.
The ornamentation of the jewellery is worked without inset precious stones.
The face retains no traces of painted cold gold, but the hair has traces of a red pigment.
The rim above the lotus petals is decorated with engraved floral ornaments.
The bottom of the pedestal is not sealed.

This two-armed form of Mahakala is known as Panjaranatha Mahakala. This deity is identified by some writers as the “Protector of the Tent”, because the Sanskrit term panjara with the meaning of “cage or pavilion” was translated as gur, the Tibetan term for “tent”. The attribute laid across the arms is a wooden gong (dharmagan i).

Panjara Mahakala (Tib. Gur gyi mgon po), three-eyed with a fierce expression, is trampling with spread legs on a corpse placed upon a single lotus pedestal. He holds with the right hand a chopper (karttrka) and with the left hand a skull-cup (kapala). The baton (gandi) originally carried across the crooks of his elbows is broken. Mahakala wears a five-fold crown decorated with skulls, is bedecked with jewellery and snake ornaments, and wears a garland of skulls (mundamala). He is also wearing an animal hide and the “investiture with the sacred thread” in the shape of a snake (nagopavita). Note the vajrafinal on top of the tall knot of hair.

The Sadhanamala (SM) contains eight sadhanas with four variations of Mahakala under various names: one face and two arms as Dvibhuja Mahakala (SM 300, 301, 302, 306); one face and four arms as Caturbhuja Mahakala (Tib. mGon po phyag bzhi pa) (SM 303, 305); one face and six arms  as Sadbhuja Mahakala  (Tib. mGon po phyag drug pa) (SM 304); eight faces, four legs and sixteen arms as Sodasabhuja Mahakala (SM 312). In Tibet, another two-armed form known as Panjara Mahakala, or Mahakala Panjaranatha (Tib. Gur gyi mgon po or Gur mgon) represents an important tutelary deity of the Sa skya pa tradition. This deity is identified by some writers as the “Protector of the Tent”, because the Sanskrit term panjara with the meaning “cage or pavilion” was translated as gur, the Tibetan term for “tent”. The attribute laid across the arms is not the pole of a tent but a wooden baton (gandi) used to strike the hour in a Buddhist monastery. The Tibetan canonical literature distinguishes a number of additional forms of Mahakala.
Mahakala
(From Wikipedia, the free encyclopedia)

Four-Armed Mahakalas
Various Four-armed Mahakalas (Skt. Chatur-bhuja Mahakala, Tib. Wylie: mGon po phyag bzhi pa) are the primary protectors of the Karma Kagyu and Drikung Kagyu schools of Tibetan Buddhism. A four-armed Mahakala is also found in the Nyingma school, although the primary protector of the Great Perfection (Skt: Mahasandhi, Tib. Dzogchen) teachings which are the pinnacle of the Nyingma system is Ekajati.
The four arms of this manifestation of Mahakala perform one of the following four positive karmas or actions, which are said to be his specific boon to his worshippers:
* Pacify sickness, hindrances, and troubles.
* Increase life, good qualities and wisdom.
* Attract whatever Dharma practitioners need and bring people to the Dharma.
* Destroy confusion, doubt, and ignorance.

Wang, Yao, 1994. “A Cult of Mahakala in Beijing”, Proceedings of the 6th Seminar of the International Association for Tibetan Studies, Fagernes 1992. Edited by P. Kvaerne. Oslo: The Institute for Comparative Research in Human Culture. Pp. 957–964 - References to the cult of Mahakala in China