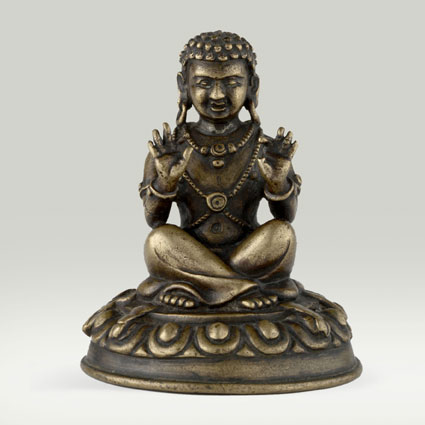 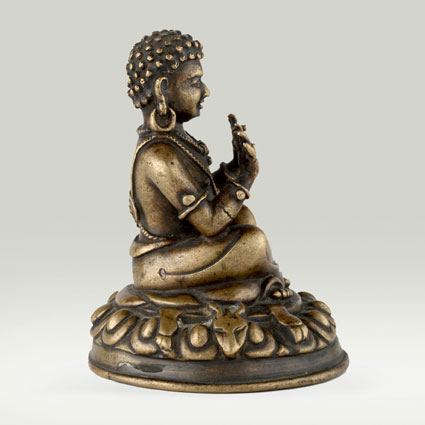 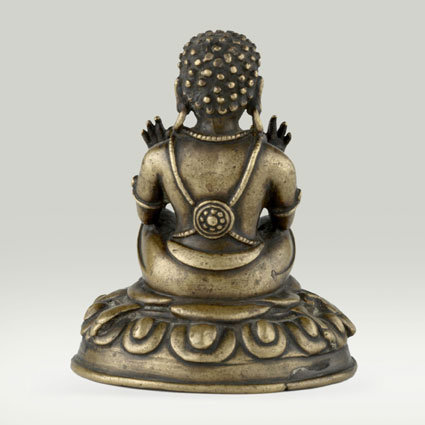 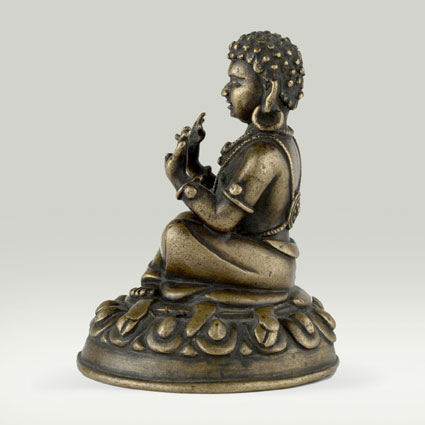 Description
Iconography
Hollow cast in one piece.
The bottom of the pedestal is sealed with a plain sheet of copper.

The Mahasiddha is seated with crossed legs on the skin of an antelope (mrga) placed upon a circular lotus pedestal. He upholds both hand in the gesture of fearlessness (abhaya-mudra). He is dressed with a cloth tied around his waist. He is ornamented with a pair of circular earrings, a necklace with attached pendants, discs on chest and back held by a two crossed beaded strings laid over both shoulders, and ornaments on both upper arms and wrists. The Mahasiddha is not identified by an inscription, however the characteristics such as the curled hair and especially the attitude point to Mahasiddha Kucipa.
Biography

Mahasiddha Kucipa "The Goitre-Necked Ascetic" tib. Ka dzo pa la na mo "Veneration to Ka dzo pa"Kucipa was a low-cast farmer working the fields in a palace called Kahari. One day, as a result of his previous karma, a goitre began to grow on his neck. It grew and grew and became more and more painful, so Kucipa, out of shame, sought refuge in a lonely place. Then one day the venerable Nagarjuna was passing by, Kucipa, instantly took faith and addressed him respectfully: "How wonderful that you have finally come! I am tortured permanently by great pain as a result of my past karma. Please teach me a method to end my suffering!" Nagarjuna replied that indeed there existed a method of liberation if practised diligently. Acknowledging Kucipa's eagerness to practice accordingly, Nagarjuna granted him initiation and revealed the mandala of Guhyasamaja. His instructions included the technique of utilising agony as the path within the context of creative and fulfilment modes of meditation. "As the objective of the creative stage, meditate that your goitre is growing! Then, as the objective of the fulfilment stage, meditate that all existing things are contained inside your goitre! Then meditate that the inherent nature of all existing things is empty!" The farmer meditated accordingly. At first the goitre continued to grow, but eventually it disappeared entirely and with it all the grief. He realised the virtue of imageless Mahamudra, became famous as Kucipa - "the goitre-necked ascetic" - and eventually attained the Dakini's Paradise.