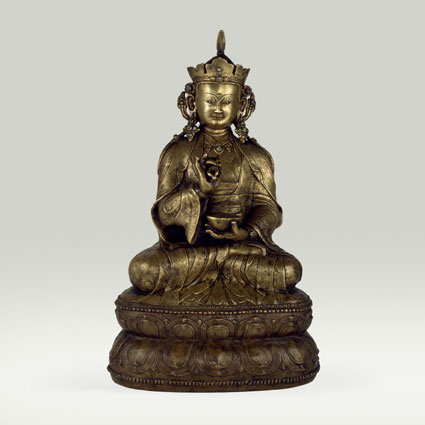 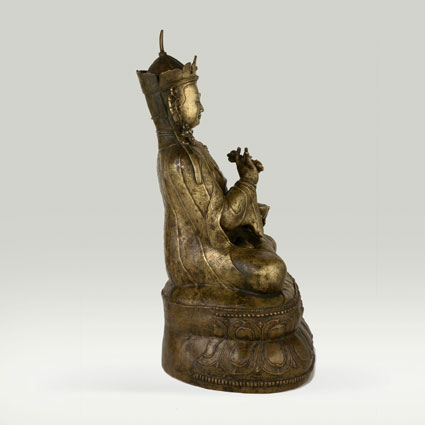 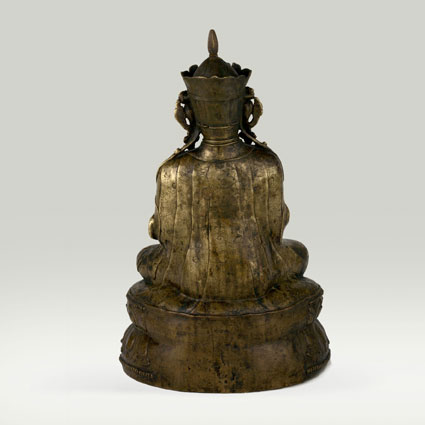 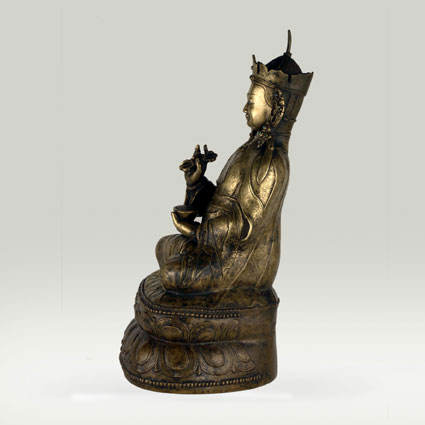 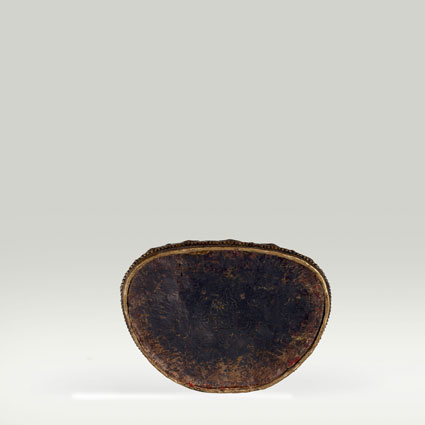 Description
Iconography
Hollow cast in two parts.
The eyes are inlaid with "silver" and copper and the pupils are filled with a black lacquer-like substance.
The jewelled ornaments are inset with a few pieces of turquoise.
The garment is decorated with engraved ornaments.
The bottom of the pedestal is sealed with a sheet of copper decorated with the visvavajra emblem.

Padmasambhava (Tib. Padma ’byung gnas) is seated in the diamond attitude (vajraparyankasana) on a double lotus pedestal with beaded borders. He holds in the right hand lifted in the gesture argumentation (vitarka-mudra) a five-pronged diamond sceptre (vajra), and in the left hand resting in the lap, an alms bowl (patra) or a skull-cup (kapala). Padmasambhava is clad with monastic garments and wears the typical hat.

Padmasambhava was a famous Indian tantric adept who lived in the eight century and who, together with Santaraksita and Kamalasila, was instrumental in the propagation of Buddhism in Tibet. The rNying ma school or “ancient translation school” is based on the teachings of the Padmasambhava, who was later deified of whom they worship eight different manifestations.

According to the style this image dates likely from the 16th century. Nam mkha’ grags pa’, who according to the inscription commissioned this image, therefore cannot be identical with the famous teacher of sNar thang who lived in the middle of the thirteen century (BA 536) or the other teacher who lived towards the end of the fourteenth century (BA 749).
Biography

PadmasambhavaPadmasambhava (also Padmakara or Padma Raja; earlier - Saroruha Vajra or simply Saroruha) (Pinyin: Lian Hua Sheng Shang Shi; Tib: Pema Jungne, Wylie: padma 'byung gnas), in Sanskrit meaning "lotus-born", is said to have brought Tantric Buddhism to Tibet in the 8th century. In Bhutan and Tibet he is better known as Guru Rinpoche ("Precious Master") or Lopon Rinpoche, where followers of the Nyingma school regard him as the second Buddha. Life and teachingsAccording to tradition, Padmasambhava was incarnated as an eight-year-old child appearing in a lotus blossom floating in Lake Dhanakosha, in the kingdom of Uddiyana, traditionally identified with the Swat Valley in present-day Pakistan. His special nature was recognized by the local king who married him to one of his daughters, Mandarava. She and Padmasambhava's other main consort, Yeshe Tsogyal, developed into realised practitioners. Many thangkas and paintings show Padmasambhava in between them.Padmasambhava's ability to memorize and comprehend esoteric texts in a single hearing established his reputation as a master above all others. Knowing that the life force of the wife and son of evil minister was about to end, he constructed an accident which resulted in their death. As a result, Padmasambhava was banished from the court and exiled in a charnel ground. Transiting various heavens and hells, he developed the power to transcend the cycle of birth and death, accomplishing the so-called great transference, otherwise known as Nirvana.His fame became known to Trisong Detsen, the 38th king of Tibet (742–797), whose kingdom was beset by evil mountain deities. The king invited Padmasambhava to Tibet where he used his tantric powers to subdue the evil deities he encountered along the way, eventually receiving the Emperor's wife, identified with the dakini Yeshe Tsogyal, as a consort. This was in accordance with the tantric principle of not eliminating negative forces but redirecting them to fuel the journey toward spiritual awakening. In Tibet he founded the first monastery in the country, Samye Gompa, initiated the first monks, and introduced the people to the practice of Tantric Buddhism. In Bhutan he is associated with the famous Taktshang or "Tiger's Nest" monastery built on a sheer cliff wall about 500m above the floor of Paro valley. He flew there from Tibet on the back of Yeshe Tsogyal, whom he transformed into a flying tigress for the purpose of the trip. Later he travelled to Bumthang district to subdue a powerful deity offended by a local king. Padmasambhava's body imprint can be found in the wall of a cave at nearby Kurje Lhakhang temple. Padmasambhava also hid a number of religious treasures (termas) in lakes, caves, fields and forests of the Himalayan region to be found and interpreted by future tertöns or spiritual treasure-finders. According to Tibetan tradition, the Bardo Thodol (commonly referred to as the Tibetan Book of the Dead) was among these hidden treasures, subsequently discovered by a Tibetan terton, Karma Lingpa. IconographyThe katvanga, a danda with three severed heads denoting liberation from the three worlds or triloka, crowned by a trishula and dressed with a sash of the Himalayan Rainbow or Five Pure Lights of the Mahabhuta is a particular divine attribute of Padmasambhava and endemic to his iconographic representation. The katvanga is also emblematic of Padmasambhava when depicted as an accoutrement of his divine consorts, Mandarava and Yeshe Tsogyal and according to the Twilight Language is representative of Yab-Yum in these examples.