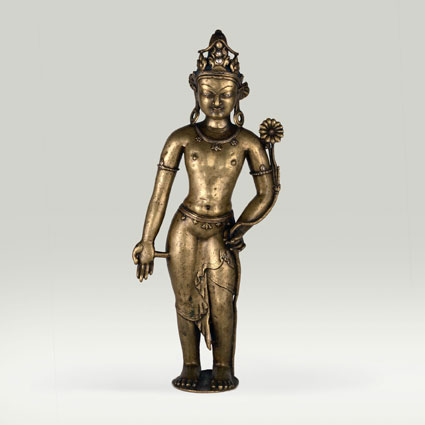 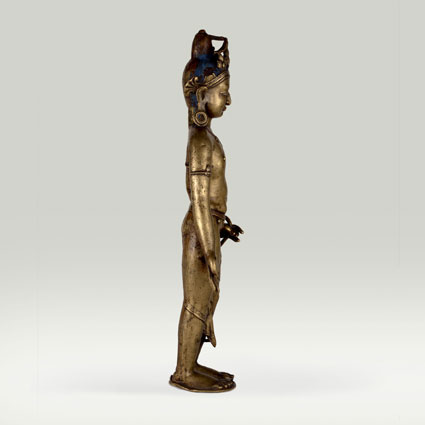 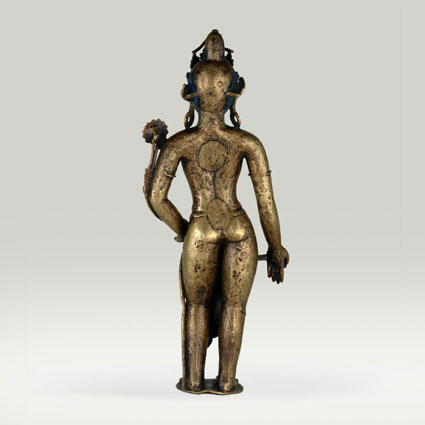 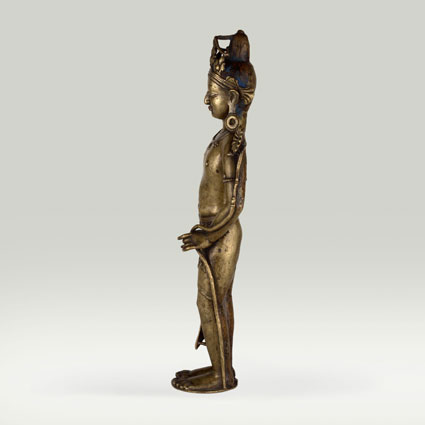 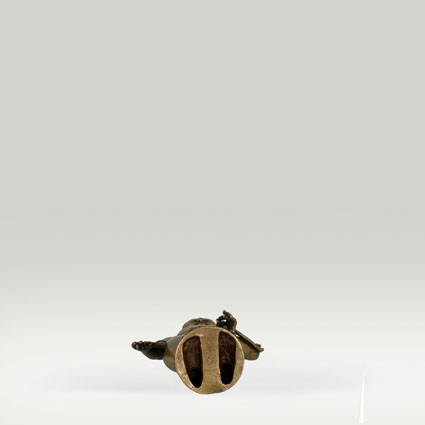 Hollow cast in one piece.
The separately cast pedestal is lost.
The eyes, crown and necklace are inlaid with "silver".
The lips, belt and ornaments on the upper arms are inlaid with copper.
The borders of the garment are decorated with engraved ornaments.
The face has traces of painted cold gold and the hair remains of a blue pigment.

The Bodhisattva, identified as Avalokitesvara Padmapani (Tib. Phyag na padmo), is standing in a slightly bent attitude (abhanga) on a circular stand. He displays with the right hand the gesture of charity (varada-mudra) and holds with the left hand the stalk of a lotus (padma) attached to the shoulder. He is clad with a cloth tied around the waist and fastened by a "silver" inlaid belt. He wears princely ornaments, namely a three-pointed crown, circular earrings, a "silver" inlaid necklace with attached pendants, and copper inlaid ornaments on both upper arms. To increase the stability and to prevent breaking the air tube joining the right hand and the hip has not been removed. The small effigy of Amitabha attached to the hair is hidden by the three fold crown.

This image is an important example of a Western Tibetan atelier working in a local style largely independent of Kashmir and other influences.

In correspondence with modern terminology, all male Bodhisattva images with a lotus (padma) attribute, with or without an effigy of Amitabha in the crown or hair, are identified in this publication as  Avalokitesvara Padmapani  (Tib. Phyag na padmo). In traditional Indian Sanskrit literature, this deity is variously named Lokesvara (SM 280; NSP 26), Lokesa (SM 83),  Avalokitesvara (NSP 2) or Lokanatha- standing (abhanga), in the diamond attitude (vajraparyanka), the noble attitude (sattvaparyanka) or the attitude of ease (lalitasana) (SM 8, 18, 19, 41).
Avalokitesvara
(From Wikipedia, the free encyclopedia)