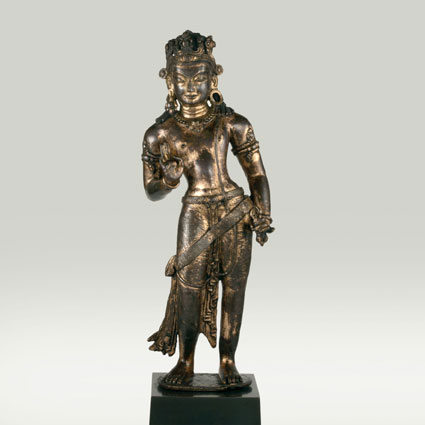 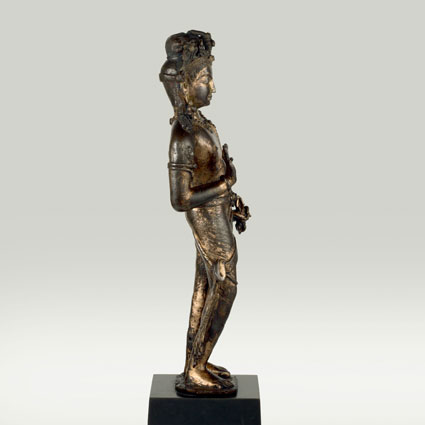 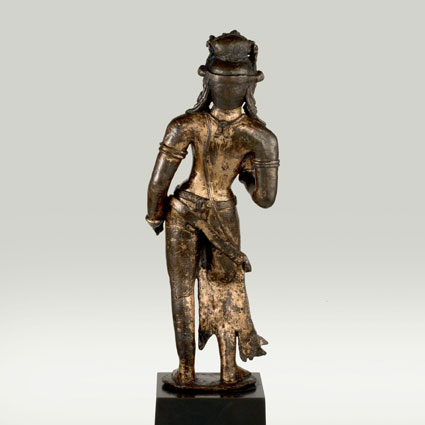 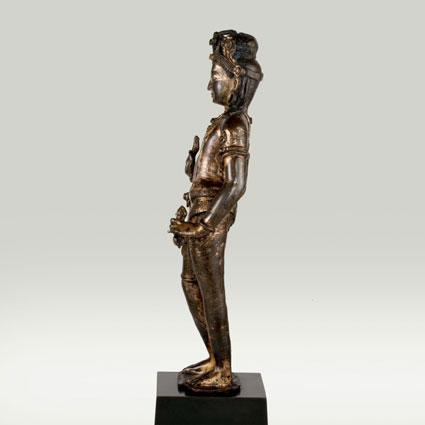 See it in the Museum
Aisle
Orientation 2
Furniture 1 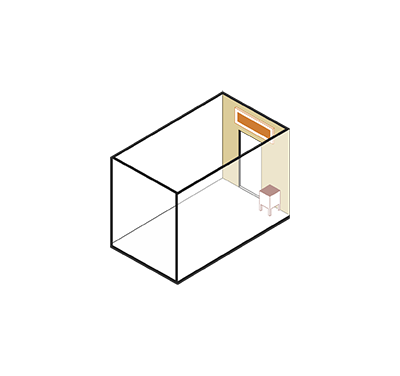 Copper with remains of gilt; hollow cast in one piece.
The garment is decorated with engraved patterns.
The hair has remains of blue pigment, which is an indication that the image was earlier under worship in Tibet.
The separately cast pedestal is lost.

The fine modelled image od Vajrapani (Tib. Phyag na rdo rje) is standing in a gracefully balanced bent attitude (abhanga) on a circular stand with two tenons attached underneath. He dispalys with the right hand the gesture of fearlessness (abhaya-mudra) and holds with the left hand a five-pronged diamond sceptre (vajra). The Bodhisattva is clad with an ornamental cloth tied around the waist with a belt and a sash about the tighs. He wears princely ornaments, namely a three fold jewelled crown, two earrings of different shape, a necklace with attached pendants, ornaments on upper arms, bracelets, and the "investiture with the sacred thread" (upavita).

In this study the following forms of Vajrapani are distinguished:
*Bodhisattva Vajrapani (Tib. Phyag na rdo rje) in the bodhisattva attitude;
*Candavajrapani (Tib. Phyag rdor gtum po), a wrathful form with vajra and tarjani mudra;
*Nilambaradhara Vajrapani (Tib. Phyag rdor gos sngon can), a wrathful form with vajra and ghanta attributes;
*Sri Ucarya Vajrapani (Tib. Phyag rdor u tsa rya), a wrathful form with vajraand ghanta attributes, and garuda (Tib. Khyung) emblems;
*Mahacakra Vajrapani (Tib. ’Khor lo chen po), a six-armed and three-headed wrathful form with vajra and ghanta attributes, and naga emblems. This division does not take into account all the numerous Tibetan forms with other names.
VajrapaniVajrapani (from Sanskrit vajra, "thunderbolt" or "diamond" and pani, lit. "in the hand") is one of the earliest bodhisattvas of Mahayana Buddhism. He is the protector and guide of the Buddha and rose to symbolize the Buddha's power. Vajrapani was used extensively in Buddhist iconography as one of the three protective deities surrounding the Buddha. Each of them symbolizes one of the Buddha's virtues: Manjusri (the manifestation of all the Buddhas' wisdom), Avalokitesvara (the manifestation of all the Buddhas' compassion) and Vajrapani (the manifestation of all the Buddhas' power) NamesIn Sanskrit, Vajrapani is known as Vajrapanina bodhisattvena mahasattvena, vajra-sattvaand, in Tibetan, as Lag na Rdo rje (Chana Dorji).On the popular level, Vajrapani, Holder of the Thunderbolt Scepter (symbolizing the power of compassion), is the Bodhisattva who represents the power of all the Buddhas, just as Avalokitesvara represents their great compassion, Manjusri their wisdom, and Tara their miraculous deeds. For the yogi, Vajrapani is a means of accomplishing fierce determination and symbolizes unrelenting effectiveness in the conquest of negativity. His taut posture is the active warrior pose (pratayalidha), based on an archer's stance but resembling the en gardeposition in Western fencing. His outstretched right hand brandishes a vajra and his left hand deftly holds a lasso – with which he binds demons. He wears a skull crown with his hair standing on end. His expression is wrathful, and he has a third eye. Around his neck is a serpent necklace and his loin cloth is made up of the skin of a tiger, whose head can be seen on his right knee. IconographyThe first representations of Vajrapani in India associated him with the Hindu God Indra. As Buddhism expanded in Central Asia, and fused with Hellenistic influences into Greco-Buddhism, the Greek hero Hercules was adopted to represent Vajrapani. He was then typically depicted as a hairy, muscular athlete, wielding a short "diamond" club. Mahayana Buddhism then further spread to China, Korea and Japan from the 6th century.In Japan, Vajrapani is known as Shukongōshin ("Diamond rod-wielding God"), and has been the inspiration for the Nio (lit. Benevolent kings), the wrath-filled and muscular guardian god of the Buddha, standing today at the entrance of many Buddhist temples under the appearance of frightening wrestler-like statues."The origin of the image of Vajrapani should be explained. This deity is the protector and guide of the Buddha Shakyamuni. His image was modelled after that of Hercules. (...) The Gandharan Vajrapani was transformed in Central Asia and China and afterwards transmitted to Japan, where it exerted stylistic influences on the wrestler-like statues of the Guardian Deities (Nio)." (Katsumi Tanabe, "Alexander the Great, East-West cultural contacts from Greece to Japan", p23).