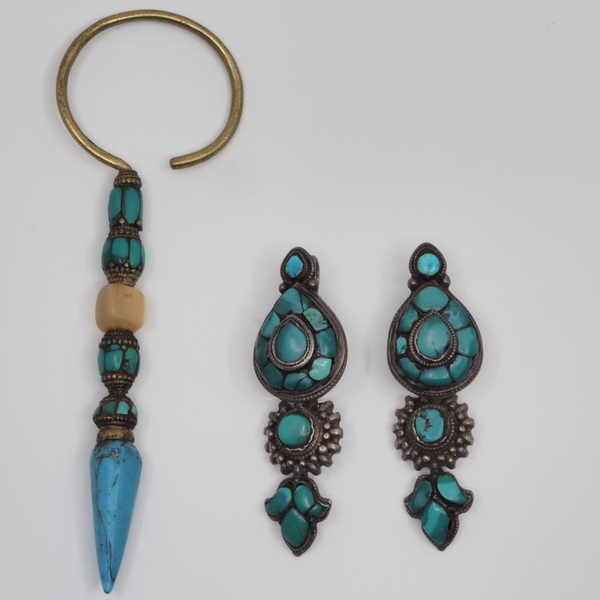 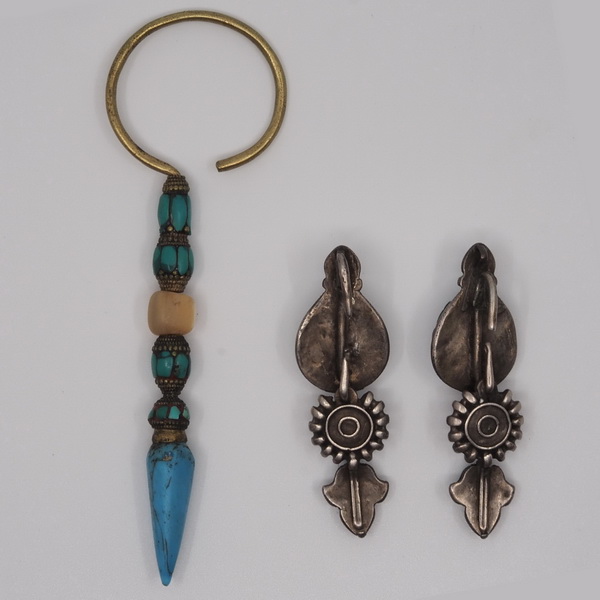 Tibetan Turquoise is a rare luxury that is mined in the Himalayas – ours specifically is from the area around Lhasa in the Himalayan area. Lhasa is known as one of the 4 locations where the finest quality Tibetan Turquoise is sourced, the others being Ngari-Khorsum, Draya and Derge.
Turquoise is formed by the percolation of groundwater through aluminous rock in the presence of copper – and the intense underground conditions around the Himalayan Mountain Range have, over many millions of years, given us a beautiful colour of this gem. It tends to be blue-green in colour and is sought after for this fact as most Turquoise found elsewhere leans more towards the blues.
Colourwise, it strikes a perfect balance between the more Sleeping Beauty Turquoise blues and some of the sharper greens we’ve seen in Copper Turquoise and other collections. It’s remarkably serene and calming to look at and it’s not difficult to see why it has been held in such high regard for many years not just in the gem community, but in the towns and villages around where it’s mined.
The colour of Turquoise is all over this part of the world, from the gem itself to the fabrics often seen in Tibet and Nepal to the colour of the water in the mountain lakes. This colour and gem is a way of life to these people, as well as a livelihood for many.
For thousands of years, Tibetan Turquoise has been prized and coveted by Tibetan and Nepalese people for its alluring beauty and spiritual values. Each piece displays a striking colour and unique pattern, caused by the matrix showing through on the finished pieces. This is another of the sought after vales associated with this gem as each piece has a unique pattern put there by Mother Nature.
Almost every person living in the Himalayas will have a piece of Turquoise, if not multiple pieces. For them, it’s a very spiritual thing to own, and it’s the most prized gemstone in this part of the world. They believe it is the ‘Sky Stone’ and has been brought to the surface of the earth from the heavens. Tibetans have valued the stone in this way since at least 1,000 BC. It has been used as a token of love between people and is thought to protect both the person giving the gem and the person who received it as a gift.
Tibetan children will always be given a piece of Tibetan Turquoise jewellery in their early years, and it’s believed this will act as a protector and stop them from falling. (Some of these villages are high in the mountains where fear of falling would be a real and dangerous concern.) Throughout their lives they will “upgrade” their Turquoise talisman several times for bigger and finer pieces, and seeking a larger and cleaner piece can become a lifelong pursuit, such is the importance of the gem in this culture. They also believe it will protect the wealth of the family and it can be used for medicinal purposes too, as it has been crushed into a powder for medicine. It is believed that as the gem is porous and can absorb things from its surroundings that a Turquoise can take on a personality of its own. They even believe that as a person grows older it will begin to lose its intensity of colour, and will shift to a more green hue. On being passed down to a younger healthy person the Turquoise is believed to recover its beauty and natural colour. Because of this they treat their gems as if they have their own personality, with affection, and as if the gem were alive. It wouldn’t be a stretch to say that this gem is treated as if it were part of the family and an important part of everyday life. The gem is also listed in several Sanskrit texts as being medicinal.
As well as these very personal pieces of jewellery, Tibetan and Nepalese villagers will decorate their possessions and homes with other pieces of Turquoise. Many wear pouches around their necks decorated with Turquoise and many will add the gem to vases, prayer wheels, musical instruments and other household items. One of their strongest beliefs is that there are no two gems alike – each one has its own personality, its own look and is distinct from all others. This ties in very nicely with our approach to this piece because no two are alike and we truly believe each and every pattern to be special, fascinating and unique.
It is very important to the people who hold this gem in such high regard that the Turquoise is untreated. Likewise, our Tibetan Turquoise is also untreated.