Silver bowl with a pair of winged lions 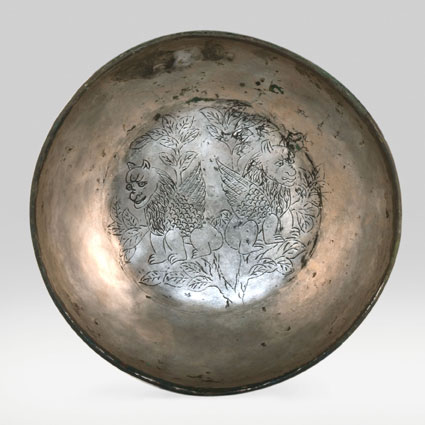 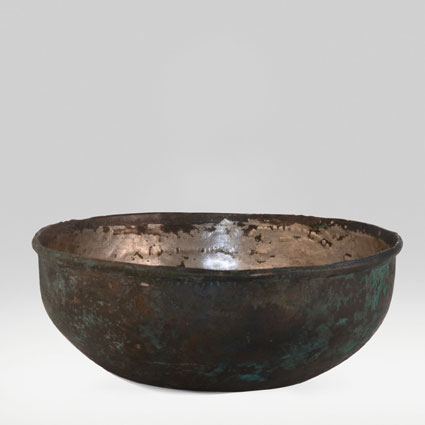 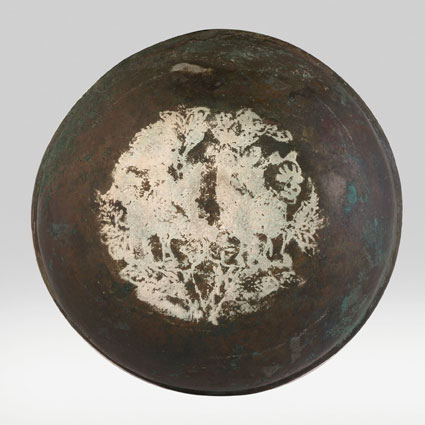 Description
Decorated with linear engravings and dotted marks.
The outer face of the bowl is covered by a dark patina partially green surface.
Only the inner side of the bowl has been cleaned.

The bottom of this circular bowl is decorated at the inside with linear engravings of a pair of winged lions in front of a tree. In addition, the rim of the bowl is decorated on the outside with dotted marks forming a floral register. This object was allegedly discovered in the greater Dulan area (Qinghai province). The workmanship and the design are of a different type than Chinese silver works of art dating from the Six Dynasties, Sui Dynasty, or the Tang Dynasty. Althought the winged types of lions known as Senmurv or also Simurgh, originate in Iran, they are of a different type than the lion decorating this silver bowl. Instead of resembling Chinese or Persian lion sculptures, they rather show similarities with early Tibetan stone carvings of lions. These form part of the small corpus of Tibetan stone sculptures carved in the round and dating from the first propagation of Buddhism during the Tibetan Imperial Period (c.600-842). The most famous of these is the pair of stone lions on the burial mound of Khri srong Ide brtsan (reigned c. 756-797) in the 'Phyong rgyas valley, located in Central Tibet. 1 Another stone lion was excavated at the Dulan burial grounds, presumably dating from the 8th/9th c.2 There is a strong possibility, that this silver bowl is the workmanship of a Tibetan artist.