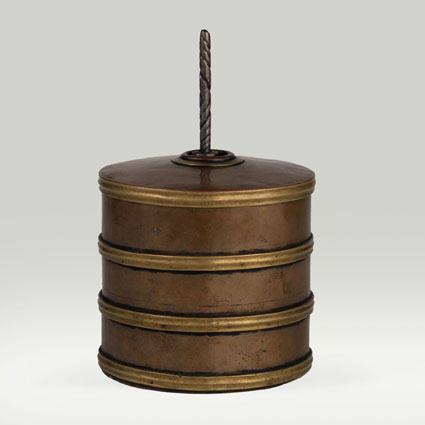 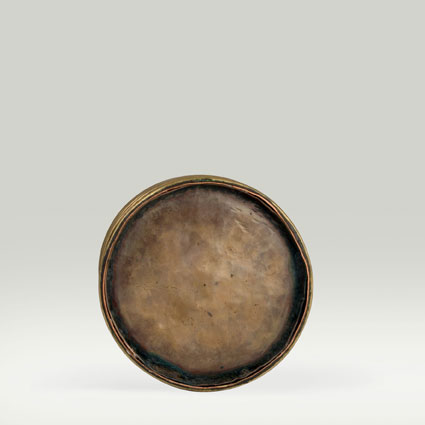 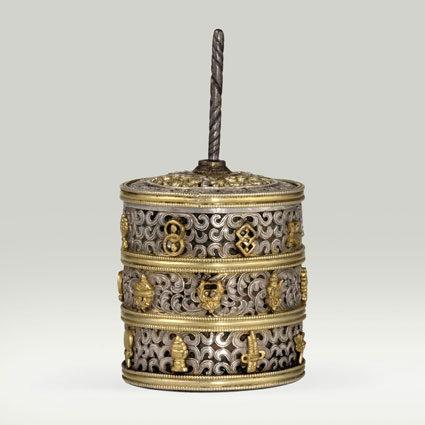 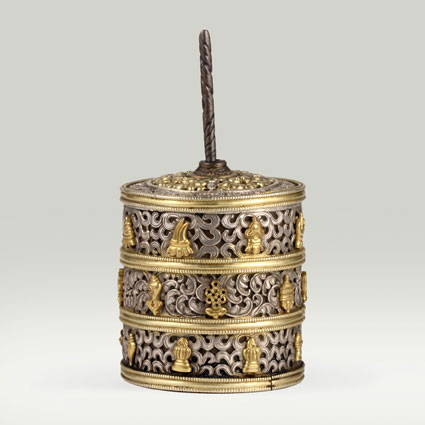 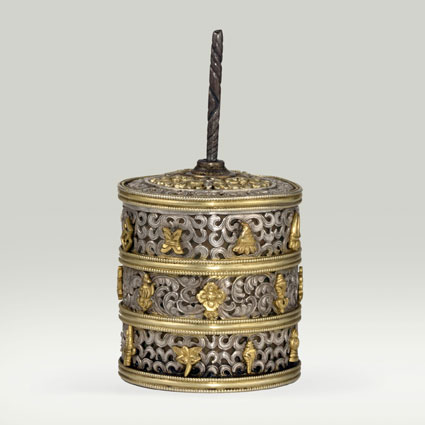 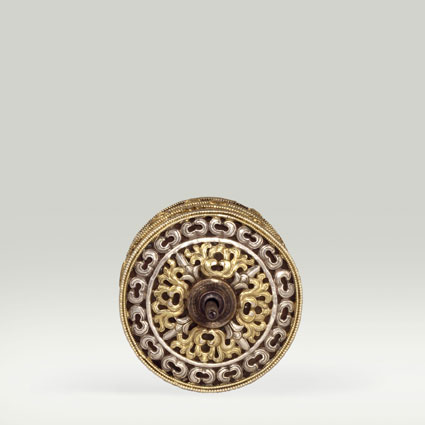 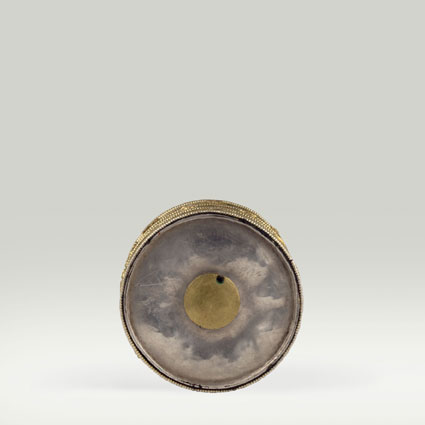 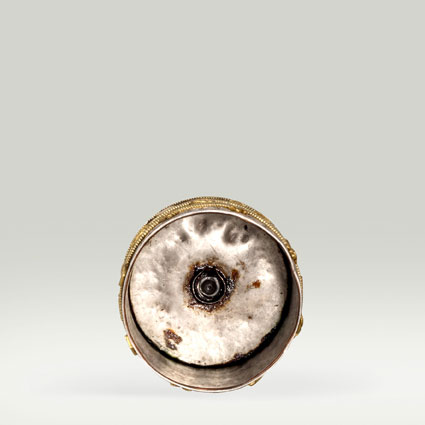 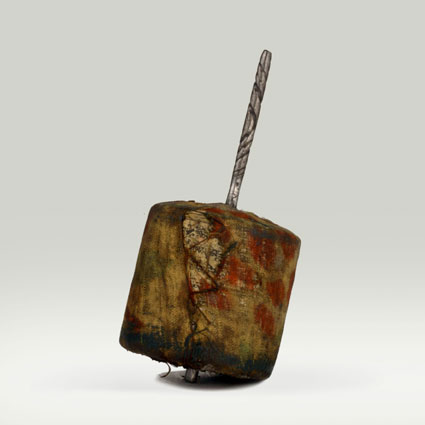 Description
Iconography
Prayer wheels are not only used by monks and nuns but are also especially popular with Buddhist lay practitioners. The spinning of such wheels have much meritorious rewards. The perimeters of large Stupa monuments are often lined with large prayer wheels made of copper kept in motion by countless worshipers reciting prayers. Many practitioners use also handheld prayer wheels such as the one exhibited here.
Prayer wheel
(From Wikipedia, the free encyclopedia)

A prayer wheel is a 'wheel' (Tib.'khor) on a spindle made from metal, wood, leather, or even coarse cotton. On the wheel are depicted or encapsulated prayers, mantras and symbols such as the Ashtamangala. According to the Tibetan Buddhist tradition, spinning such a wheel will have much the same effect as orally reciting the prayers.

Origins
The earliest recorded mentioning of prayer wheels is noted to be written by a Chinese pilgrim around 400 A.D. in Ladka. The concept of the prayer wheel is a physical manifestation of the phrase "turning the wheel of Dharma," which describes the way in which the Buddha taught.

Practice
The rules surrounding the prayer wheels are very specific (although occasionally vary according to tradition). The practitioner must spin the wheel clockwise. This was determined because this is the direction the mantras are written. Before and after the practitioner turns the wheel, he or she must repeat the mantra, or no merit will be incurred by the wheels use. However, some traditions state that repeating a mantra simply (or greatly) enhances the effects of the prayer wheel, and just turning it has benefits and merits alone. Each revolution is considered as meritous as reading the inscription aloud as many times as it is written on the scroll. The wheel must not be spun frantically but held straight (if a hand-held wheel) and turned smoothly with the motivation and spirit of compassion and bodhichitta (the noble mind that aspires to full enlightenment for the benefit of all beings). Which, it's been stated, are some of the benefits attributed to the practice of turning the wheel. It helps compassion and bodhichitta arise in the practitioner. The practitioner should also repeat the mantra as many times as possible during the turning of the wheel and keep a calm meditative mind. Also, there's a tradition of asking the Buddhas and bodhisattvas to dedicate your accumulated merits to all sentient beings after a session of meditation (with or without the wheel).

Thubten Zopa Rinpoche has commented that installing a prayer wheel has the capacity to completely transform a place "...peaceful, pleasant, and conducive to the mind." Simply touching a prayer wheel is said to bring great purification to negative karmas and obscurations.

*Mani Wheel
The Mani wheel, or the hand prayer wheel, is a cylindrical body mounted on a wooden or metal handle. The cylinder itself is weighted down with a cord or chain allowing it to be spun by a slight rotation of the wrist along with the mantra it contains.

*Water Wheels
This type of prayer wheel is simply a prayer wheel that is turned by flowing water. The water that is touched by the wheel is said to become blessed, and carries it purifying power into all life forms in the oceans and lakes that it feeds into.

*Fire Wheel
This wheel is turned by the heat of a candle or electric light. The light emitted from the prayer wheel then purifies the negative karmas of the living beings it touches.

*Wind Wheel
This type of wheel is turned by wind. The wind that touches the prayer wheel alleviates the negative karmas of those it touches.

*Stationary Prayer Wheels
Many monasteries around Tibet have large fixed metal wheels set side by side in a row. Passersby can turn the entire row of wheels simply by sliding their hands over each one.

*Electric Dharma Wheels
There are currently prayer wheels powered by electric motors. "Thardo Khorlo," as these electric wheels are sometimes known, contain one thousand copies of the mantra of Chenrezig, as well as many other copies of other mantras. The Thardo Khorlo can accompanied by lights and music if one so chooses. The Thardo Khorlo is also said to provide much more benefit than a Mani wheel, because it contains a much more complete representation of the Buddha Dharma.

*Digital Prayer Wheels
The Dalai Lama has commented that animated GIF's on websites work just as well as other prayer wheels. As the GIF image turns, waves of compassion in all directions in the surrounding area.

Some have suggested that the the spinning of a hard drive (several thousand rotations per minute) can act in similar function to a prayer wheel by saving an image of Om mani padme hum or other mantra on their local machine.