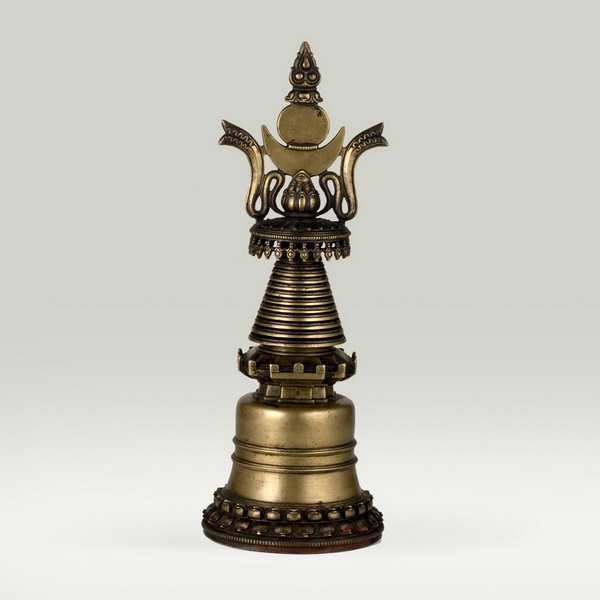 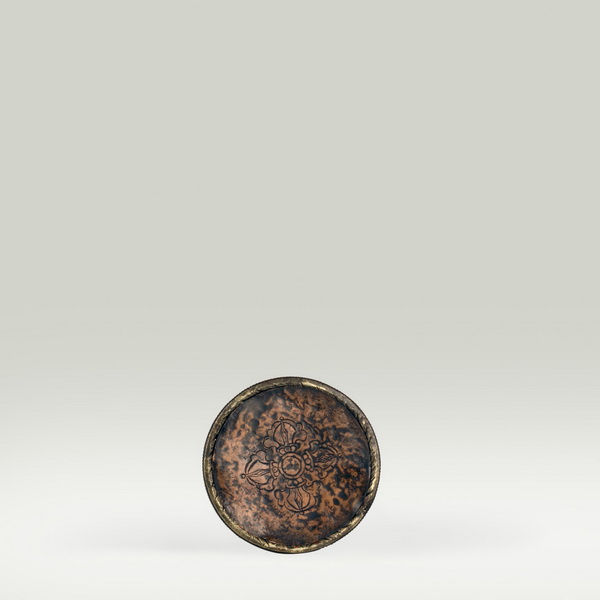 See it in the Museum
Emporium
Orientation 2
Furniture 5

Hollow cast in three parts.
The bottom of the stupa is sealed with a piece of wood.

The mortal remains of eminent teachers – such as the Dalai Lamas and Panchen Lamas – were traditionally entombed inside large st°pa-shaped receptacles. Most famous among the early bKa’ gdams mchod rten («kadam chöden») (Skt.: Mahaparinirvana Stupa) are those at sNye thang («nyetang»). They were spared during the “cultural revolution” and are thought to contain relics of Mahasiddha Naropa (956–1040), and the begging bowl of Atisa (982–1054), who died there.

With the worship of stupas in early Buddhism the practice of pilgrimage to the four great places in the life of Buddha Shakyamuni became popular. These four locations were Lumbini (District Bhairwah, Terai, Nepal), the birth-place of Buddha Shakyamuni; Bodhgaya (District Gaya, Bihar), the location of Shakyamuni’s victory over Mara (maravijaya) and subsequent enlightenment under the asvattha tree; the Deer Park (Esipatana Mrgadava )at Sarnath (District Varanasi, Uttar Pradesh), the location of Shakyamuni’s first sermon known as setting the wheel of the Dharma in motion (dharmacakra pravartana); and Kusinagara (modern Kasia, District Deoria, Uttar Pradesh), the site of Shakyamuni’s mahaparinirvana. Later the pilgrimage was extended to the “eight great places” (astamahasthana), where Shakyamuni’s “eight great miracles” (astamahapratiharya) took place. The four additional locations were at the Jetavana monastery at Sravasti (District Gonda, Uttar Pradesh), where the “great illusion” (mahapratiharya), also known as “illusion of the twins” (yamakapratiharya) took place; Sankasya (modern Sankissa, District Farrukhabad, Uttar Pradesh), the site of Shakyamuni’s descent from the Trayastrimsa heaven (devarohana); Rajagrha (District Patna, Bihar), the place of Shakyamuni’s taming of the wild elephant Nalagiri; and Vaisali (modern Basarh, District Muzaffarpur, Bihar), where Shakyamuni received the gift of honey by one of the monkey at the Monkey’s Pond.