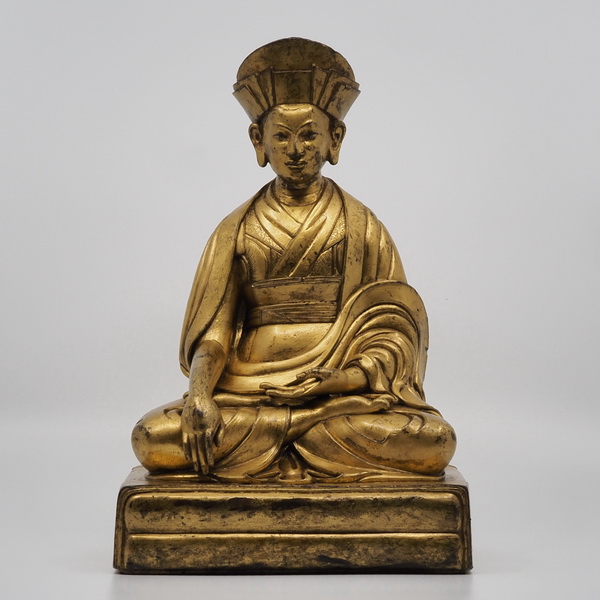 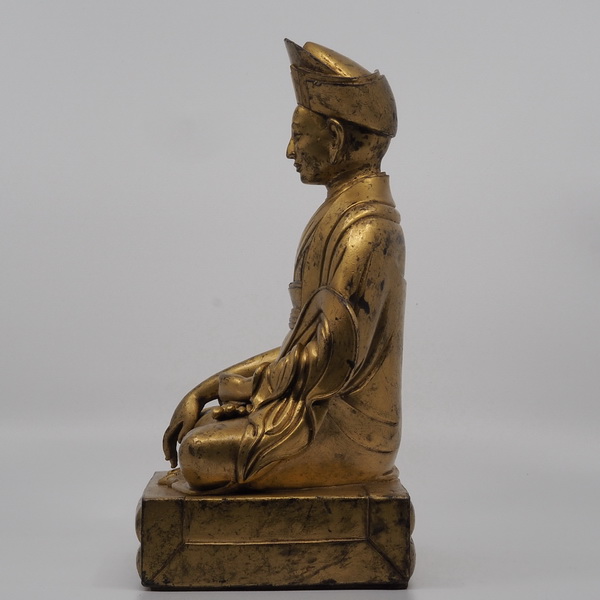 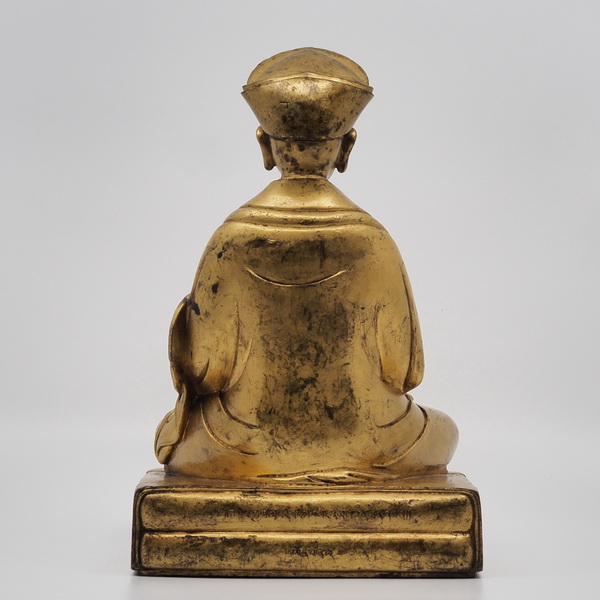 Inscription at the back: "Prostrate at the feet of the Kagyu master, Sonam Rinchen", "fourth from the left"
Biography
(From Wikipedia, the free encyclopedia)


Gampopa
Gampopa (1079-1153), also known as Dagpo Lhaje ("physician from Dagpo") and Dakpo Rinpoche ("Precious Master from Dagpo"), founded the Kagyu school, one of the four major schools of Tibetan Buddhism. In many ways the establishment of the Kagyu school marks the beginning of the distinct institution we now recognize as Tibetan Buddhism, even as the Indian Tantric Buddhism model that inspired it faded away.
Gampopa, a physician from Dagpo region in Kham, was the foremost student of the Tibetan Buddhist teacher Milarepa. Gampopa was renowned for the clarity of his perception and his knowledge of both Kadampa and, later, Mahamudra methods.

Gampopa's position in the transmission lineage of the esoteric Mahamudra teaching is as follows:
1. Tilopa (988-1069), the Indian yogi who experienced the original transmission of the Mahamudra
2. Naropa (1016-1100), who perfected the methods of accelerated enlightenment, described in his six yogas of Naropa.
3. Marpa (1012-1097), the first Tibetan in the lineage, who translated the Vajrayana and Mahamudra texts into Old Tibetan
4. Milarepa (1052-1135), poet and master who overcame Marpa's reluctance to teach but nonetheless attained enlightenment in a single lifetime
5. Gampopa, Milarepa's best student, who integrated Atisha's Kadampa teaching and Tilopa's Mahamudra teaching to establish the Kagyu school

This lineage sequence, taken together, is called the "Five Founding Masters" by the Kagyu followers.

Prior to studying under Milarepa, Gampopa had studied the kadampa traditions, which is a gradual path based on the lamrim teachings. He searched for, and eventually met Milarepa, and attained realization of ultimate reality under his guidance.
Gampopa wrote The Jewel Ornament of Liberation and founded the Dagpo Kagyud school in 1125. This school merged with the older but less influential Shangpa Kagyud school, founded circa 1050, also dependent on Naropa), to form the major Kagyu school. While the Shangpa school was the first Kagyupa school, it was the integrative teaching of Gampopa which unified Kadampa and Mahamudra teachings into the Kagyu approach.
Gampopa also established various monastic institutions, taught extensively, and attracted many students. Four of his disciples founded the four major Kagyu schools: