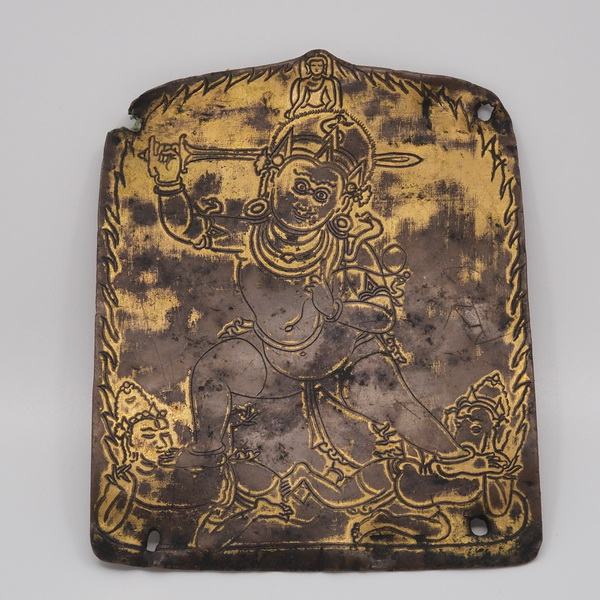 The fearful form of Nila Acala or “blue Acala” (Tib.: Mi g.yo ba sngon po) is trampling on the defeated Hindu gods Siva and Ganesa. Acala is stepping to the right with the right leg bent and the left straight (pratyalidhasana). He brandishes in the right uplifted hand the sword (khadga) as symbol of “cutting through ignorance”, and holds with the left hand, displayed in the gesture of exorcism (karana-mudra) with the index finger and small ﬁnger erect, the noose (pasa), an attribute of mainly wrathful deities to catch the enemies of Buddhism. Acala is sparsely dressed with an animal skin tied around the belly. The crown, the ornaments at the upper arms, the “investiture with the sacred thread” (nagopavita), the anklets and the belt are composed of snake emblems. Note the small effigy of Aksobhya above the crown.

and paintings of Acala depict him mostly with three eyes, but sometimes only with two eyes. The squinting eyes are one of the characteristics of Acala.

(Formerly: Collection Heidi & Ulrich von Schroeder; 2012-15)
Acala
Also known as Acalanatha, Aryacalanatha, Acala-vidya-raja and Candamaharosana. In Vajrayana Buddhism, Acala (alternatively, Achala or Acala) is the best known of the Five Wisdom Kings of the Womb Realm. Acala means "The Immovable One" in Sanskrit. Acala is also the name of the eighth of the ten stages of the path to buddhahood.