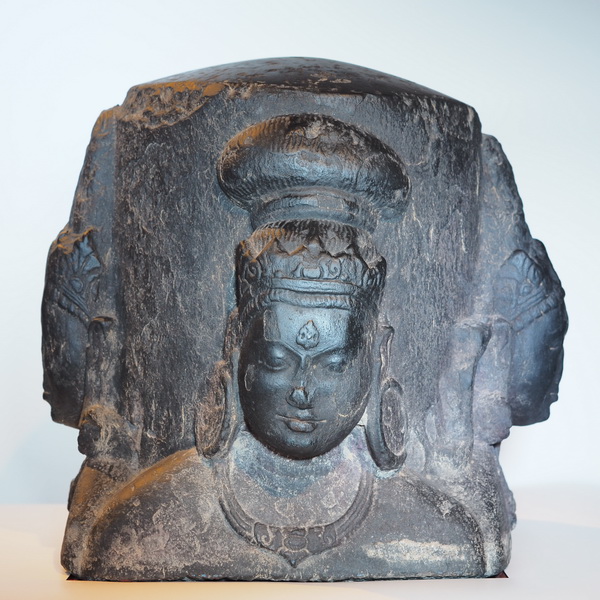 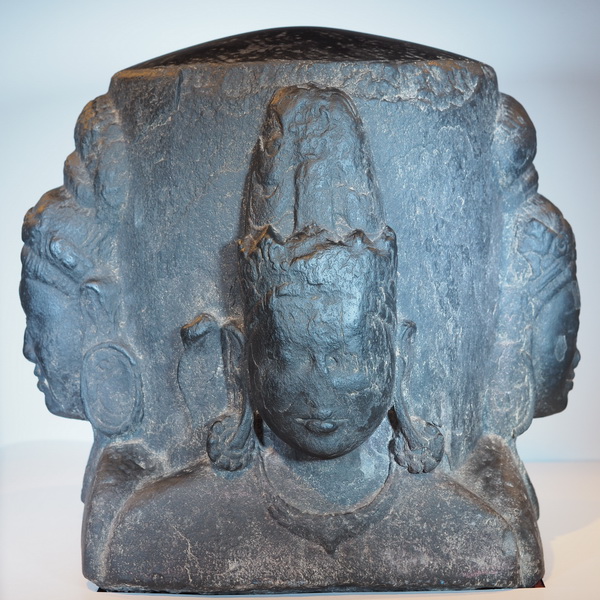 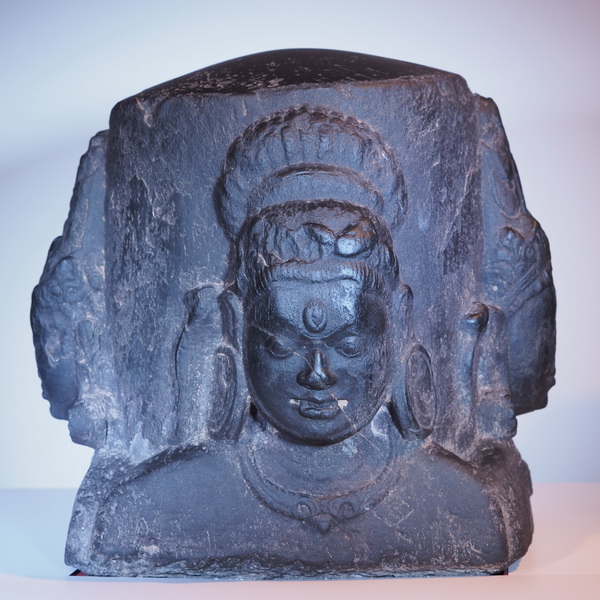 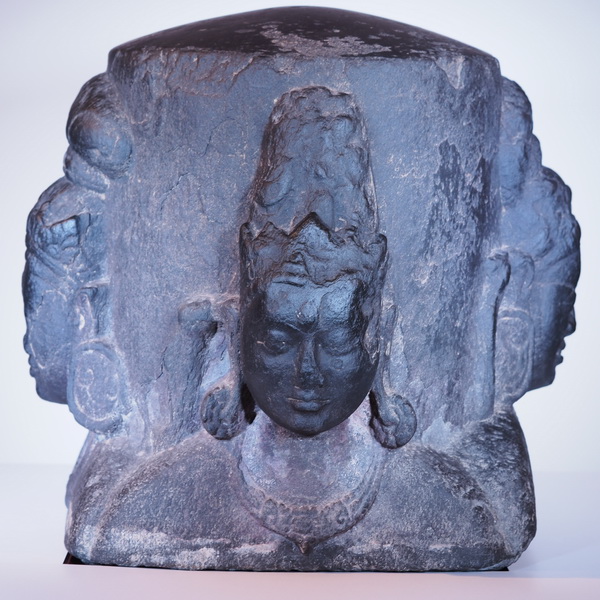 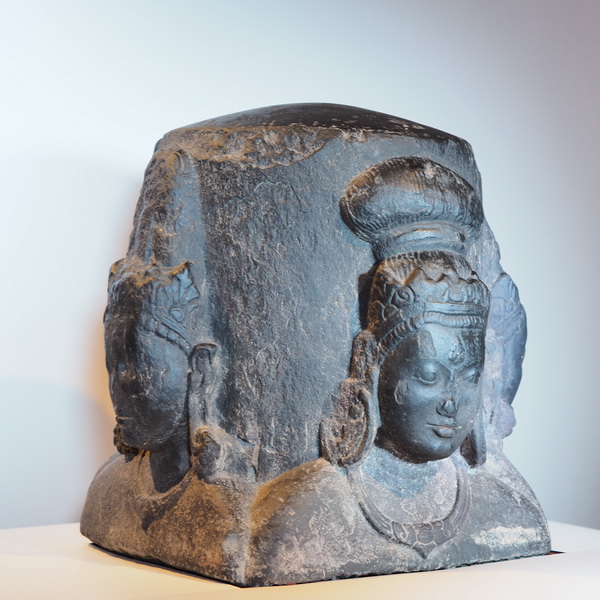 See it in the Museum
Room 1: India and Nepal
Orientation 5
Plinth 2 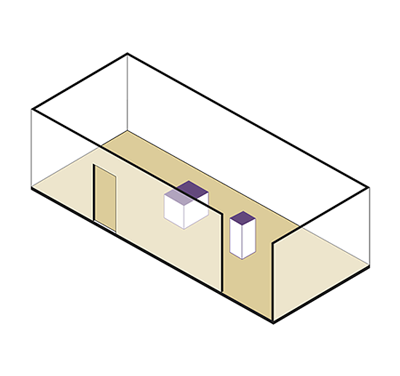 A lingam (lit. "sign, symbol or mark"), sometimes referred to as linga or Shiva linga, is an abstract or aniconic representation of the Hindu deity Shiva in Shaivism. It is a votary symbol revered in temples, smaller shrines, or as self-manifested natural objects. The lingam is often represented within a lipped, disc-shaped platform. Lingayats wear a lingam inside a necklace, called Ishtalinga.

Lingam is additionally found in Sanskrit texts with the meaning of "evidence, proof" of God and God's existence. Lingam iconography found at archaeological sites of the Indian subcontinent and southeast Asia includes simple cylinders set inside a yoni, rounded pillars with carvings such as of one or more mukha (faces), and anatomically realistic representations of a phallus such as at Gudimallam. In the Shaiva traditions, the lingam is regarded as a form of spiritual iconography.

Nomenclature and significance
Lingam as interpreted in Shaiva Siddhanta tradition which is a major school of Shaivism. Upper and lower part represents Parashiva and Parashakti perfections of Lord Shiva.
Lingam, states Monier Monier-Williams, appears in the Upanishads and epic literature, where it means a "mark, sign, emblem, characteristic". Other contextual meanings of the term include "evidence, proof, symptom" of God and God's power. The term also appears in early Indian texts on logic, where an inference is based on a sign (linga), such as "if there is smoke, there is fire" where the linga is the smoke. According to James Lochtefeld, it is sometimes "simplistically called a phallic symbol". It is a religious symbol in Hinduism representing Shiva as the generative power, all of existence, all creativity and fertility at every cosmic level.

The lingam of the Shaivism tradition is a short cylindrical pillar-like symbol of Shiva, made of stone, metal, gem, wood, clay or disposable material. According to Encyclopædia Britannica, the lingam is a votary aniconic object found in the sanctum of Shiva temples and private shrines that symbolizes Shiva and is "revered as an emblem of generative power". It often is found within a lipped, disked structure that is an emblem of goddess Shakti and this is called the yoni. Together they symbolize the union of the feminine and the masculine principles, and "the totality of all existence", states Encyclopædia Britannica.
According to Rohit Dasgupta, the lingam symbolizes Shiva in Hinduism, and it is also a phallic symbol. Since the 19th-century, states Dasgupta, the popular literature has represented the lingam as the male sex organ. This view contrasts with the traditional abstract values they represent in Shaivism wherein the lingam-yoni connote the masculine and feminine principles in the entirety of creation and all existence. According to Wendy Doniger, for many Hindus, the lingam is not a "male sexual organ" but of a spiritual icon and their faith, just like for the Christians the cross is not an "instrument of execution" but a symbol of Christ and the Christian faith.
According to Alex Wayman, given the Shaiva philosophical texts and spiritual interpretations, various works on Shaivism by some Indian authors "deny that the linga is a phallus". To the Shaivites, a linga is neither a phallus nor do they practice the worship of erotic penis-vulva, rather the linga-yoni is a symbol of cosmic mysteries, the creative powers and the metaphor for the spiritual truths of their faith.
According to Sivaya Subramuniyaswami, the lingam signifies three perfections of Shiva. The upper oval part of the Shivalingam represent Parashiva and lower part of the Shivalingam called the pitha represents Parashakti. In Parashiva perfection, Shiva is the absolute reality, the timeless, formless and spaceless. In Parashakti perfection, Shiva is all-pervasive, pure consciousness, power and primal substance of all that exists and it has form unlike Parashiva which is formless.

Iconography and worship
Linga-yoni worship in different ways; Left: river, Right: temple.
The traditional lingam rituals in major Shiva temples includes offerings of flowers, grass, dried rice, fruits, leaves, water and a milk bath. Priests chant hymns, while the devotees go the sanctum for a darshana followed by a clockwise circumambulation of the sanctum. On the sanctum walls, typically are reliefs of Dakshinamurti, Brahma and Vishnu. Often, near the sanctum are other shrines, particularly for Shakti (Durga), Ganesha and Murugan (Kartikeya). In the Hindu tradition, special pilgrimage sites include those where natural lingams are found in the form of cylindrical rocks or ice or rocky hill. These are called Svayambhuva lingam, and about 70 of these are known on the Indian subcontinent, the most significant being one in Kashi (Varanasi) followed by Prayaga, Naimisha and Gaya.

A lingam may be made of clay (mrinmaya), metal (lohaja), precious stone (ratnaja), wood (daruja), stone (sailaja, most common), or a disposal material (kshanika). The construction method, proportions and design is described in Shaiva Agama texts. The lingam is typically set in the center of a pindika (also called yoni or pithas, symbolizing Shakti). A pindika may be circular, square, octagonal, hexagonal, duodecagonal, sixteen sided, alliptical, triangular or another shape. Some lingams are miniaturized and they are carried on one's person, such as by Lingayats in a necklace. These are called chala-lingams. The Hindu temple design manuals recommend geometric ratios for the linga, the sanctum and the various architectural features of the temple according to certain mathematical rules it considers perfect and sacred. Anthropologist Christopher John Fuller states that although most sculpted images (murtis) are anthropomorphic or theriomorphic, the aniconic Shiva Linga is an important exception.

According to Shaiva Siddhanta, the linga is the ideal substrate in which the worshipper should install and worship the five-faced and ten-armed Sadāśiva, the form of Shiva who is the focal divinity of that school of Shaivism.

The various styles of lingam iconography are found on the Indian subcontinent and southeast Asia.