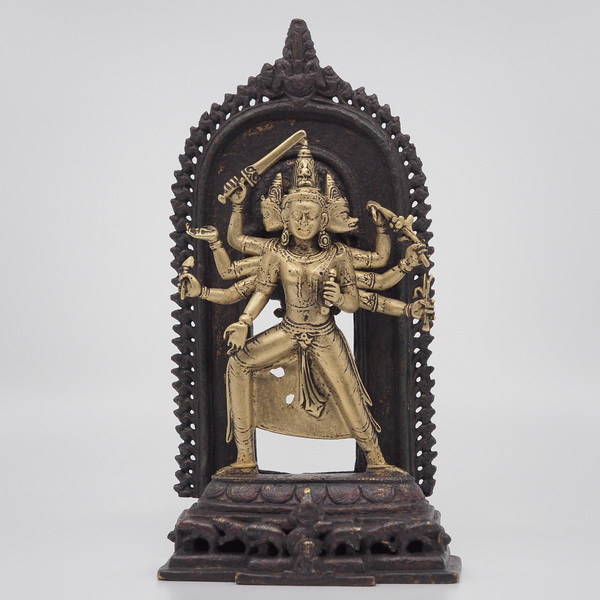 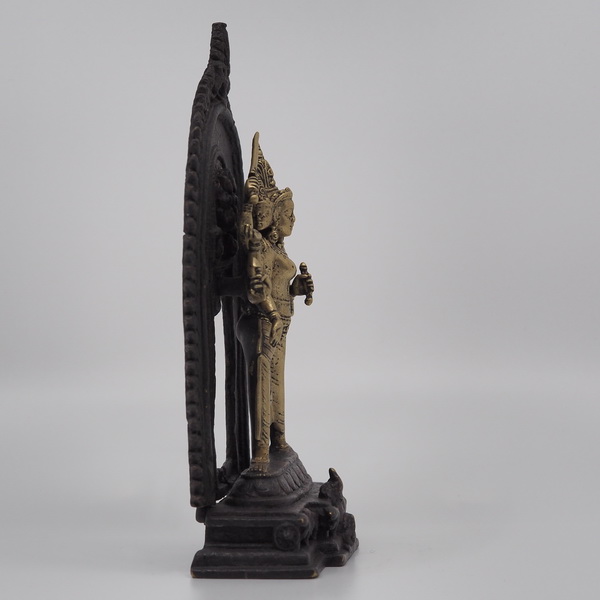 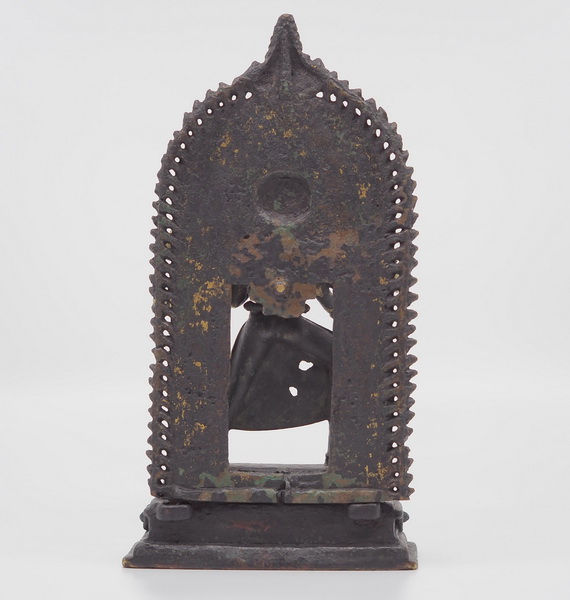 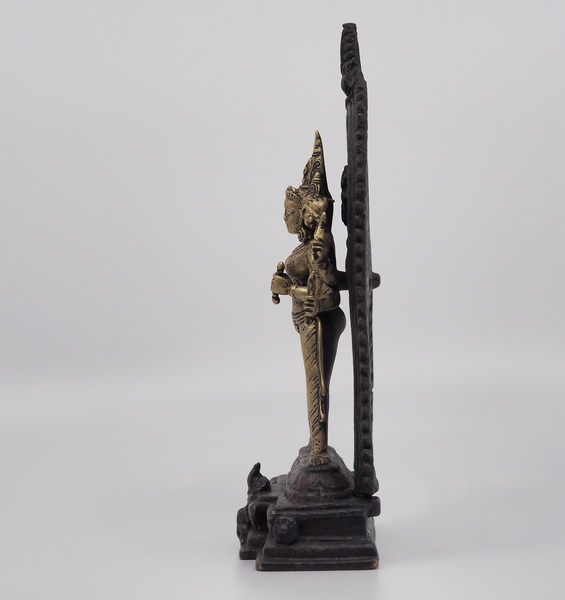 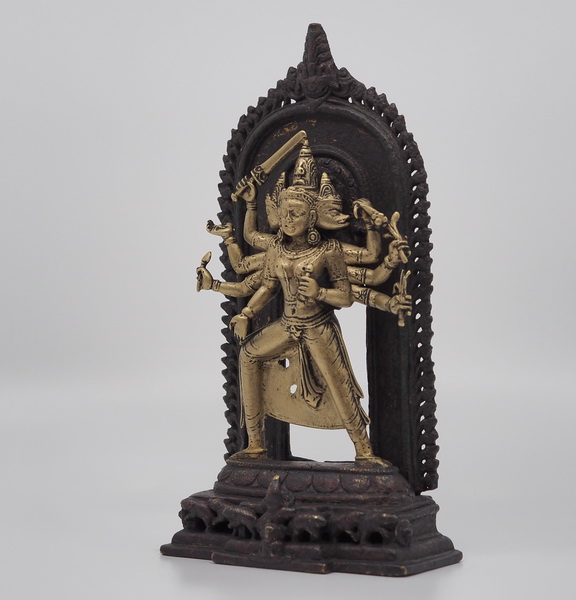 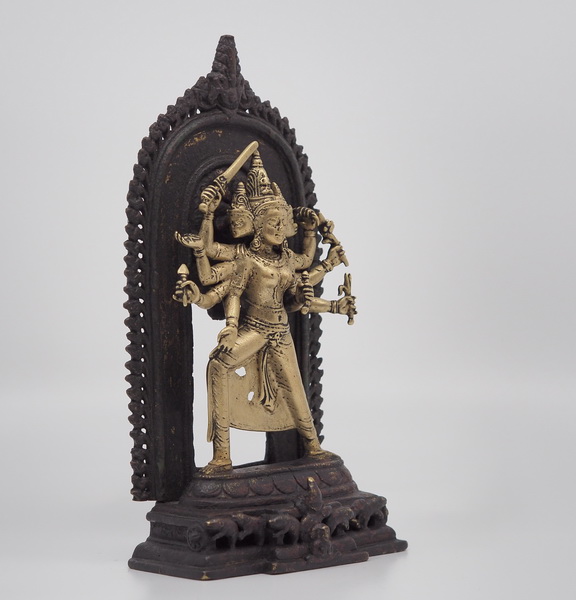 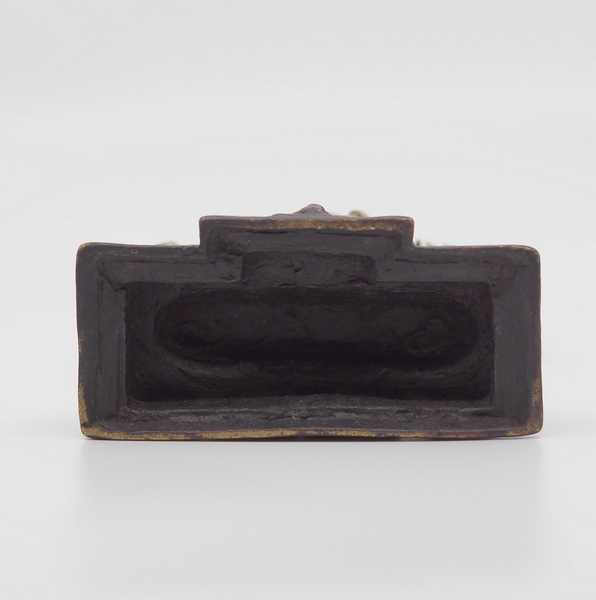 Description
Iconography
This image represents one of several known forms of the youthful three-headed and eight-armed Marici, her left head being that of a sow. Marici is stepping to the right with the right leg bent and the left one straight as in a Violent fight (pratyalidha), placed on a single lotus mounted on a moulded, rectangular, stepped pedestal. The front of the pedestal is decorated with seven pigs and Rahu the charioteer above them with a makara head as part of the chariot in front of him. Marici, the “rays oflight”, and goddess of dawn is related to the male sun-god Surya, whose chariot is, drawn by seven horses, and to the male moon-god Candra, whose chariot is drawn by seven goose. Marici holds the various attributes in her eight hands. The principal right hand is damaged and the attribute remains unknown; above are an arrow (sara), an small effigy of Ganpati held in the vandanabhinaya-mudra, and a sword (capa). The left hands hold a diamond sceptre (vajra) in the left principal hand, above a hook (ankusa) used for elephants, a branch of the Asoka tree (Lat.: Saraca indica), and a bow (capa). Marici is clad in a cloth tied around the hips with a jewelled belt. She has bejewelled ornaments, namely a small crown in front of the tall knot of hair with a bejewelled tip decorated with a tiny effigy of Vairocana, necklaces, bracelets on the upper arms and wrists, and anklets.

Of the few Pala bronzes of Marici known this appears to be perhaps the finest.

Marici (lit. "Ray of Light"), is a deva, as well as a bodhisattva associated with light and the sun. She is among the lists one of the guardian devas, specifically the Sixteen Devas, the Twenty Devas and the Twenty-Four Devas. In Taoism and Chinese folk religion, Doumu (Chinese: pinyin: Dǒumǔ Yuánjūn) is considered to be synonymous with Mārīcī within Chinese Esoteric Buddhism.

Marici is depicted in several ways. Some examples included:
*As a man or woman on an open lotus, the lotus itself sometimes perched on the back of seven sows.
*As a male deity riding a boar, often having two or six arms.
*Riding a fiery chariot pulled by seven savage boars or sows.
*As a multi-armed woman with a different weapon in each hand standing or sitting on the back of a boar.
*As having three faces and six or eight arms.

The Nartang Gyatsa and Rinjung of Taranata describe one form.
Both the Vajravali and Mitra Gyatsa describe a mandala of Mārīcī that includes twenty-five surrounding figures.
This is not an exhaustive list, and many more depictions of Mārīcī exist throughout the Buddhist world.

Origins
The origins of Mārīcī are obscure; however, she appears to be an amalgamation of Indic, Iranian and non-Indo-Iranian antecedents spanning 1500 years.

She is also thought to have originated from the Vedic goddess of dawn Usas.