Saraswati (copy in the style of Chöying Dorje) 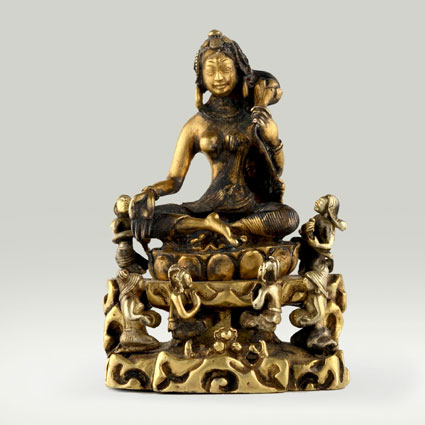 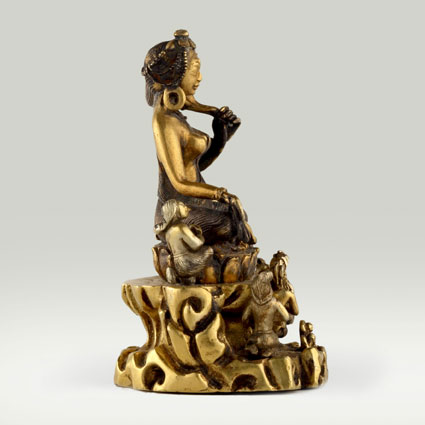 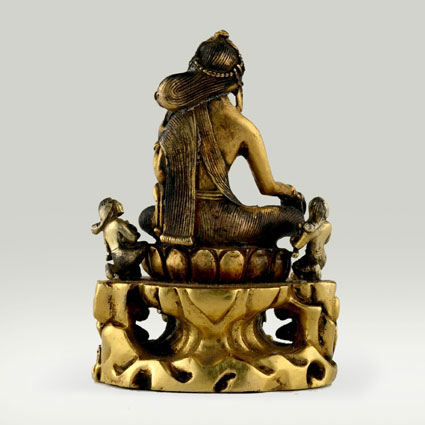 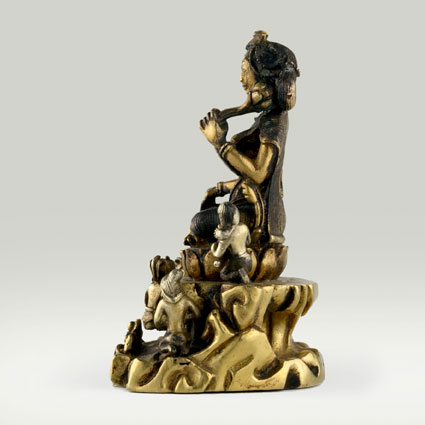 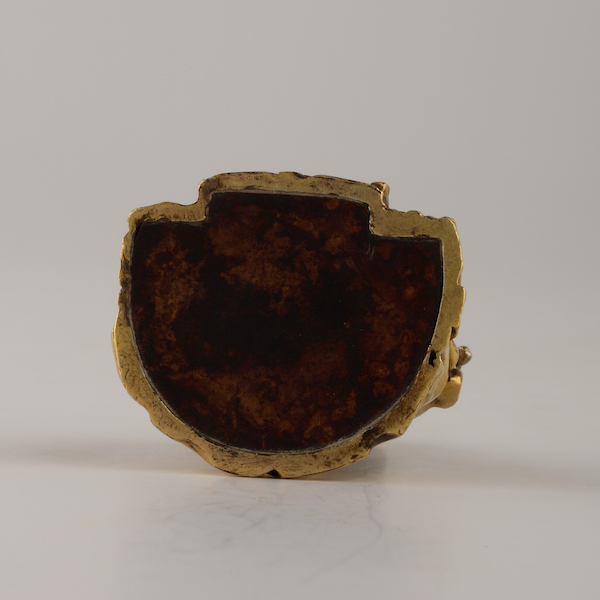 BSIT p. 762 179 A-D
Karmapa (Nick Douglas Meryl White) Archi-Milano p. 127
Saraswati
In Hinduism, Saraswati is one of the goddesses, the other two being Lakshmi and Durga, that form the female counterpart of the Trimurti. Saraswati has been regarded as a river goddess and in recent times a goddess of knowledge, music and the arts. She is the consort of Brahma, the Hindu god of creation.

Saraswati as a river
The Rigvedic hymns dedicated to Saraswati mention her as a mighty river with creative, purifying, and nourishing properties. The best theory regarding the Vedic Sarasvati River states that it was formed by the present headwaters of the Yamuna River. In ancient times, after they had left the Himalayan foothills, the waters of the Yamuna turned west instead of east at Paonta Saheb. Next, the river flowed southwest across the Punjab and Haryana regions along the course of the modern Ghaggar-Hakra River in a pathway roughly parallel to the smaller Indus River to its west. The Sutlej flowed further east than it does today and joined the Sarasvati somewhere near Bahawalpur. Eventually, the wide river emptied into the Rann of Kutch, which at the time was a more integral part of the Arabian Sea.
Along the course of the Sarasvati, the Harappan Civilization developed. The earliest known examples of writing in India have been found in the ruined cities that line the now dry riverbed of the ancient waterway. Some have postulated that the goddess Saraswati gained her role as personified communication and the giver of knowledge due to the role of the Sarasvati River in the development of written language in ancient India.

Between 2000 B.C. and 1700 B.C., seismic activity caused the waters of the river's two main sources to change course. The Sutlej moved course westward and became a tributary of the Indus River. The Yamuna moved course eastward and became a tributary of the Ganges. The tremendous loss of water which resulted from these movements caused the once mighty river to become sluggish and dry up in the Thar Desert without ever reaching the sea. Without any water for irrigation or transportation, the dense population of the river basin soon shifted east with the waters of the Yamuna to the Ganges River valley. Late Vedic texts record the river as disappearing at Vinasana (literally, "the disappearing"), and as joining both the Yamuna and Ganges as an invisible river. Some claim that the sanctity of the modern Ganges is directly related to its assumption of the holy, life-giving waters of the ancient Sarasvati.
Recently, archaeologists using satellite images have been able to trace the course of the river. A small channel of water flows near Kurukshetra. A nearby signboard denoting the former path of the once great Sarasvati River can be seen along the main highway (GT road).

Origins and context in Hinduism
In the Rig-Veda (6,61,7), Saraswati is credited, in association with Indra, with killing the serpentine being Vritraasura, a demon which hoarded all of the earth's water and so represents drought, darkness, and chaos. She is often seen as equivalent to other Vedic goddesses such as Vak, Savitri, and Gayatri. Saraswati represents intelligence, consciousness, cosmic knowledge, creativity, education, enlightenment, music, the arts, and power. She is not only worshipped for secular knowledge, but for the true divine knowledge essential to achieve moksha. She is also referred to as Shonapunya, a Sanskrit word meaning “one purified of blood”.
In some Puranas (like Skanda Purana) she is associated with Shiva and in some Tantras with Ganesha.
According to Brahma Vaivarta Purana 2.6.13-95 Vishnu has three wives, who constantly quarrel with each other, so that eventually, he keeps only Lakshmi, giving Ganga to Shiva and Saraswati to Brahma.

The original (spiritual) forms of devas including Saraswati are present in the spiritual world:
"In the centre [of Vaikuntha] reside the deities of fire, sun and moon, Kurma-avatara, Ananta Sesha, and Garuda, the master of the three Vedas. The Vedic hymns and all sacred mantras also stay in that holy place, which is made of all the Vedas, and which is known in the Smriti-sastra as the yoga-pitha."
Rupa Gosvami elaborates: "Accompanied by Goddess Lakshmi and other associates, the catur-vyuha expansions headed by Lord Vasudeva are manifest in the eight directions, beginning with the east. In the directions beginning with the southeast, the palaces of Lakshmi, Saraswati, Rati, and Kanti respectively are situated."
According to Vedanta she is considered to be the feminine energy and knowledge aspect (shakti) of Brahman, as one of many aspects of Adi Shakti.

Other associations
As a river/water goddess, Saraswati symbolizes fertility and prosperity. She is associated with purity and creativity, especially in the context of communication, such as in literary and verbal skills. In the post-Vedic age, she began to lose her status as a river goddess and became increasingly associated with literature, arts, music, etc. Her name literally means "the one who flows", which apparently was applied to thoughts, words, or the flow of a river (in Sanskrit: "dhaara-pravaah").

Saraswati is known as Benzaiten in Japan.
Goddess Saraswati is often depicted as a beautiful, yellow-skinned woman dressed in pure white often seated on a white Nelumbo nucifera lotus (although Her actual vahana is believed to be a swan), which symbolizes that she is founded in the experience of the Absolute Truth. Thus, she not only has the knowledge but also the experience of the Highest Reality. She is mainly associated with the color white, which signifies the purity of true knowledge. Occasionally, however, she is also associated with the color yellow, the color of the flowers of the mustard plant that bloom at the time of her festival in the spring. She is not adorned heavily with jewels and gold, unlike the goddess Lakshmi, but is dressed modestly--perhaps representing her preference of knowledge over worldly material things.

She is generally shown to have four arms, which represent the four aspects of human personality in learning: mind, intellect, alertness, and ego. Alternatively, these four arms also represent the 4 vedas, the primary sacred books for Hindus. The vedas, in turn, represent the 3 forms of literature: - Poetry (Rigveda contains hymns- representing poetry), Prose (Yajurveda contains prose), Music (Samaveda represents music). The four hands also depict this thusly - prose is represented by the book in one hand, poetry by the garland of crystal, music by the veena. The pot of sacred water represents purity in all of these three, or their power to purify human thought.

She is shown to hold the following in her hands:
* A book, which is the sacred Vedas, representing the universal, divine, eternal, and true knowledge as well as her perfection of the sciences and the scriptures.
* A mala of crystals, representing the power of meditation and spirituality.
* A pot of sacred water, representing creative and purificatory powers.
* The veena, a musical instrument that represents her perfection of all arts and sciences. Saraswati is also associated with anuraga, the love for and rhythm of music which represents all emotions and feelings expressed in speech or music. It is believed that children born with that name will prove to be very lucky in their studies.

A white swan is often located next to her feet. The sacred swan, if offered a mixture of milk and water, is said to be able to drink the milk alone. The swan thus symbolizes discrimination between the good and the bad or the eternal and the evanescent. Due to her association with the swan, Goddess Saraswati is also referred to as Hamsa-vahini, which means "she who has a swan as her vehicle".
She is usually depicted near a flowing river, which may be related to her early history as a water goddess. The swan and her association with the lotus flower also point to her ancient origin.
Sometimes a peacock is shown beside the goddess. The peacock represents arrogance and pride over its beauty, and by having a peacock as her mount, the Goddess teaches Hindus not to be concerned with external appearance and to be wise regarding the eternal truth.

Festivals
Saraswati Puja is performed on the 5th day of Falgun month of Hindu Calendar( Also known as Basant Panchami).
In several parts of India, generally states to the south, Saraswati Poojas are conducted during Navaratri - a 9 day long festival celebrating the power of feminity. Navratri is celebrated in all goddess-temples of India - esp. with great pomp and splendor in south and east India. The last three days of Navaratri starting from Mahalaya Amavasya (the New Moon day) are dedicated to the goddess. On the ninth day of Navaratri (Mahanavami), books and all musical instruments are ceremoniously kept near the gods early at dawn and worshipped with special prayers. No studies or any performance of arts is carried out, as it is considered that the Goddess herself is blessing the books and the instruments. The festival is concluded on the tenth day of Navaratri (Vijaya Dashami) and the goddess is worshipped again before the books and the musical instruments are removed. It is customary to study on this day, which is called Vidyarambham (literally, Commencement of Knowledge). All students are traditionally required to study a part of all that they have learn till that day, and also to start the study of something new on the same day. Gurus (Preceptors) are worshipped on this day as embodiments of Saraswati. In major part of India this Navratri is associated with Goddess Durga, but down South is celebrated as Saraswati Puja.
During Vasant Panchami, which comes either at the end of January or the beginning of February, prayers and pujas are offered to her.

Temples
Major temples for the goddess are in Shringeri (Karnataka), Pushkar (Rajastan), Panachikkad (Kerala), South Paravoor (Kerala). Though temples for saraswati are rare, there are some minor temples in Kumbakonam,Koothanur (Tamilnadu), Basar( Andhra Pradesh). Also Deupatan, Kamalakshi, Thimi, Bhadrakali, Gairidhara in the Kathmandu region have her temples.

The Worship of Goddess Saraswati
The goddess's abode is mentioned as being in the state of Kashmir - among the Himalayas. Her favorite fruit is supposed to be the apple.
In hindu mythology, great significance is attached to offering honey to this goddess, as honey is representative of perfect knowledge.

English Translation:
"May Goddess Saraswati, who is fair like the jasmine-colored moon, and whose pure white garland is like frosty dew drops; who is adorned in radiant white attire, on whose beautiful arm rests the veena, and whose throne is a white lotus; who is surrounded and respected by the Gods, protect me. May you fully remove my lethargy, sluggishness, and ignorance."

Other meanings
* An Indian female name.
* In India there is a river called Saraswati, which flows from the west end of the Aravalli Hills into the east end of the Rann of Kutch.[citation needed]
* Veda's pada paatha ( etymology ) explains the compound word Saraswati as "Saaram vaati iti saraswati" - "She who flows towards the absolute is saraswati" - thus edifying the ability of knowledge and communication to steer one towards spiritual absolutes.