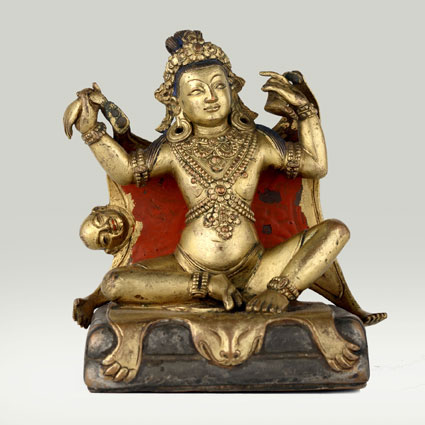 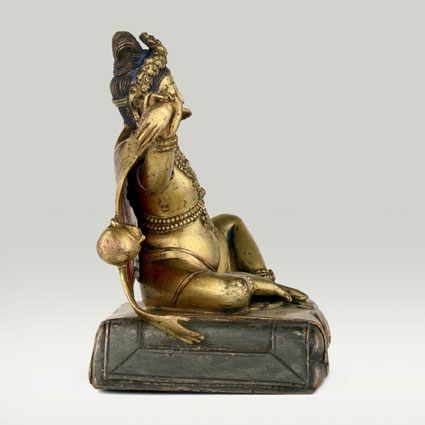 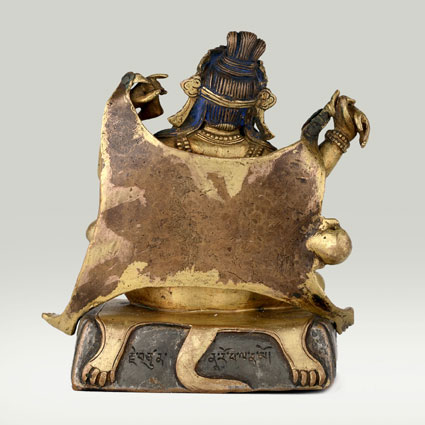 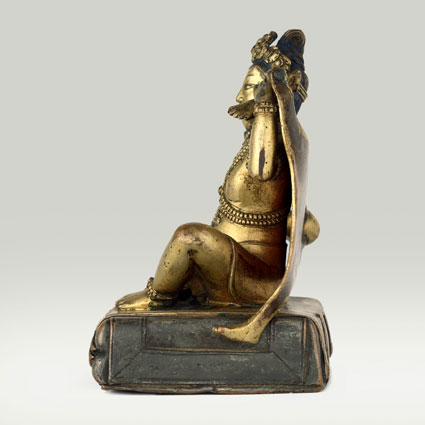 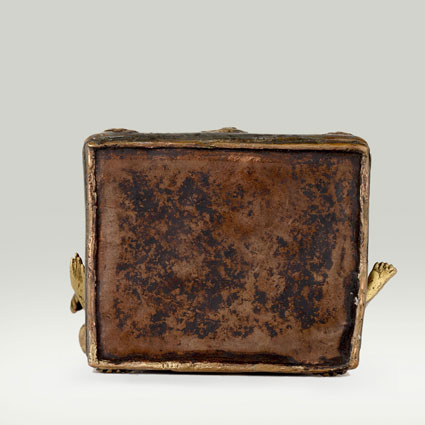 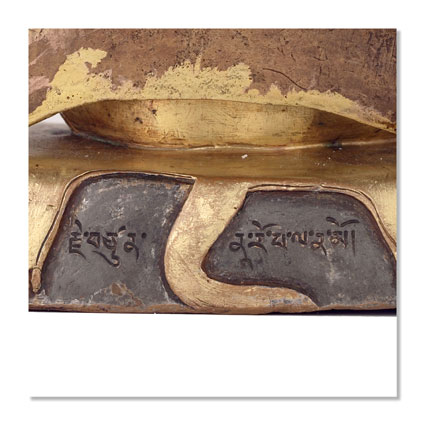 The great Indian Mahasiddha Naropa is seated in the attitude of royal ease (rajalilasana) on a cushion covered with a tiger skin. The human skin that he holds with his uplifted hands identifies him as Nåropa. Among his pupils was Mar pa (1012–1097), the founder of the bKa’ brgyud («kagyü») tradition in Tibet.
Biography
(From Wikipedia, the free encyclopedia)


Tilopa
Tilopa (Tibetan; Sanskrit: Talika, 988–1069) was born in either Chativavo (Chittagong), Bengal or Jagora, Bengal. He was a tantric practitioner and mahasiddha. He developed the mahamudra (Tibetan: phyag rgya chen po) method, a set of spiritual practices that greatly accelerates the process of attaining bodhi (enlightenment).
He is regarded as the human founder of the Kagyu lineage of Tibetan Buddhism and is, in effect, the Buddha Vajradhara.

Tilopa was born into the brahmin (priestly) caste – according to some sources, a royal family – but he abandoned the monastic life upon receiving orders from a dakini (female buddha whose activity is to inspire practitioners) who told him to adopt a mendicant and itinerant existence. From the beginning, she made it clear to Tilopa that his real parents were not the persons who had raised him, but instead were primordial wisdom and universal voidness. Advised by the dakini, Tilopa gradually took up a monk’s life, taking the monastic vows and becoming an erudite scholar. The frequent visits of his dakini teacher continued to guide his spiritual path and close the gap to enlightenment.


He began to travel throughout India, receiving teachings from many gurus:
* from Saryapa he learned of tummo (inner heat);
* from Nagarjuna he received the radiant light (Sanskrit: prabhasvara) and illusory body (Sanskrit: maya deha) teachings (refer Chakrasamvara Tantra), Lagusamvara tantra, or Heruka Abhidharma);
* from Lawapa, the dream yoga;
* from Sukhasiddhi, the teachings on life, death, and the bardo (between life states, and consciousness transference) (phowa);
* from Indrabhuti, he learned of insight (prajna);
* and from Matangi, the resurrection of the dead body.

During a meditation, he received a vision of Buddha Vajradhara and, according to legend, the entirety of mahamudra was directly transmitted to Tilopa. After having received the transmission, Tilopa embarked on a wandering existence and started to teach. He appointed Naropa, his most important student, as his successor.

Six Words of Advice
Tilopa gave Naropa a teaching called the Six Words of Advice, the original Sanskrit or Bengali of which is not extant; the text has reached us in Tibetan translation. In Tibetan, the teaching is called gnad kyi gzer drug – literally, “six nails of key points” – the aptness of which title becomes clear if one considers the meaning of the English idiomatic expression, “to hit the nail on the head.”
According to Ken McLeod, the text contains exactly six words; the two English translations given in the following table are both attributed to him.

Mahamudra instructions
Tilopa also gave mahamudra instruction to Naropa by means of the song known as “The Ganges Mahamudra,” one stanza of which reads:
The fool in his ignorance, disdaining Mahamudra,
Knows nothing but struggle in the flood of samsara.
Have compassion for those who suffer constant anxiety!
Sick of unrelenting pain and desiring release, adhere to a master,
For when his blessing touches your heart, the mind is liberated.

Attachment and enjoyment
One of the most famous and important statements attributed to Tilopa is: “The problem is not enjoyment; the problem is attachment.”