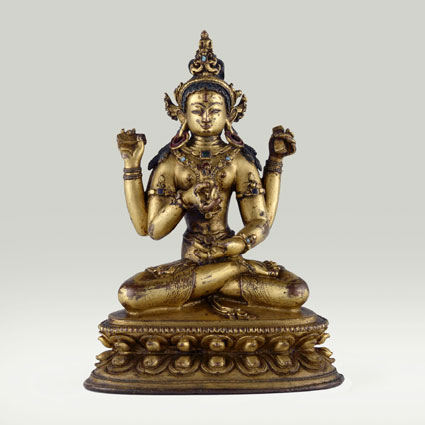 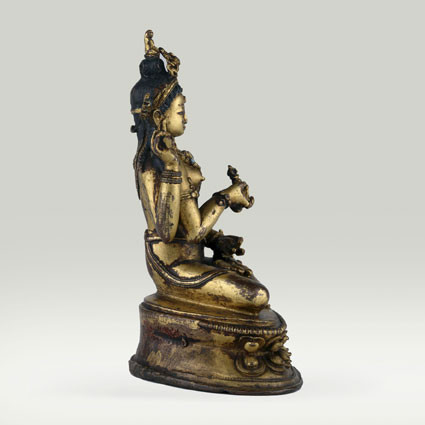 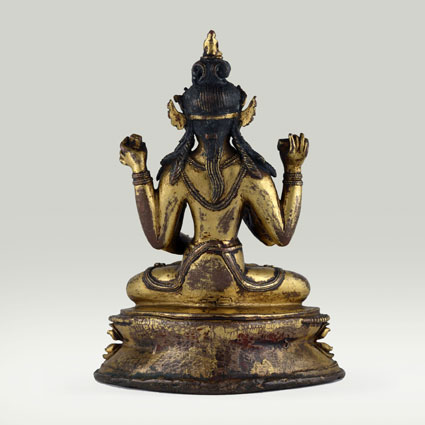 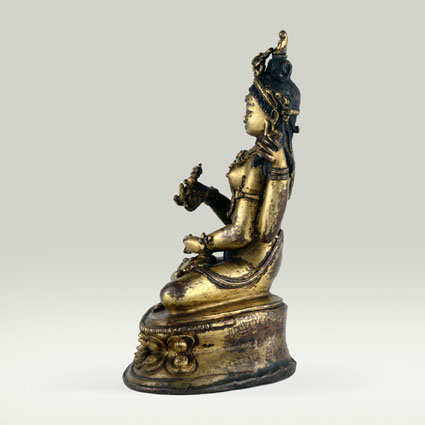 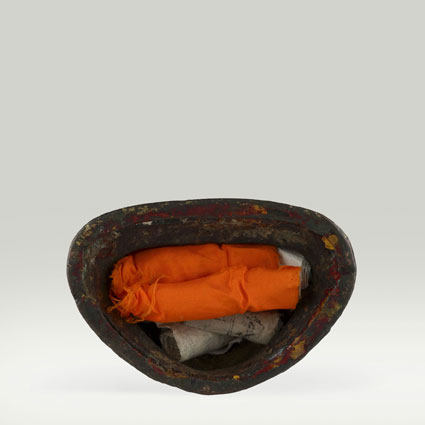 Description
Iconography
Hollow cast in one piece.
The jeweled ornaments are inset with turquoise.
The bottom of the pedestal is not sealed.

The four-armed goddess is seated in the diamond attitude (vajraparyanka) on a double lotus pedestal with an upper border. The principal right hand is held before the chest and holds a (?) The principal left hand is placed in the lap and holds (?) The second pair of hands carry a manuscript (pustaka) of the Astasahasrika Prajnaparamita Sutra. Note the small effigy of a Buddha in the hair, possibly Akshobhya.

This image is difficult to identify. Several goddess are associated with the Astasahasrika Prajnaparamita Sutra manuscript. The image possibly represents a form of Cunda (Tib. Tsunda) or Prajnaparamita (Tib. Shes rab kyi pha rol tu phyin ma).
Cunda
In Buddhism in the Mahaparinibbana Sutta Cunda was a blacksmith who gave the last meal of either mushrooms or pork to Buddha. The Buddha fell violently ill but told Cunda not to worry. Buddha recovered from his illness before he attained parinirvana.

History
The earliest sutra in this class is the Astasahasrika Prajnaparamita Sutra or "Perfection of Wisdom in 8,000 Lines", which was probably put in writing about 100 BC and is one of the earliest Mahayana sutras. More material was gradually compiled over the next two centuries. As well as the sutra itself, there is a summary in verse, the Ratnagunasamcaya Gatha, which some believe to be slightly older because it is not written in standard literary Sanskrit.

Between the years 100 and 300 this text was expanded into large versions in 10,000, 18,000, 25,000 and 100,000 lines, collectively known at the "Large Perfection of Wisdom". These differ mainly in the extent to which the many lists are either abbreviated or written out in full; the rest of the text is mostly unchanged between the different versions. Since the large versions proved to be unwieldy, they were later summarized into shorter versions, produced from 300 to 500. The shorter versions include the Heart Sutra (PrajñāpāramitāHṛdaya Sūtra) and the Diamond Sutra (PrajñāpāramitāVajracchedikāSūtra). These two are widely popular and have had a great influence on the development of Mahayana Buddhism. Tantric versions of the Prajnaparamita literature were produced from 500 on. The Prajnaparamita terma teachings are held to have been conferred upon Nagarjuna by Nagaraja, the King of the nagas, who had been guarding them at the bottom of a lake.

Teachings
(The following is a quotation used with permission):
"At first sight, The Perfection of Wisdom is bewildering, full of paradox and apparent irrationality. Yet once one accepts that trying to unravel these texts without experiencing the intuitions behind them is not satisfactory, it becomes clear that paradox and irrationality are the only means of conveying to the reader those underlying intuitions that would otherwise be impossible to express. Edward Conze succinctly summarized what The Perfection of Wisdom is about, saying, 'The thousands of lines of the Prajñāparamitācan be summed up in the following two sentences:
1. One should become a bodhisattva (or, Buddha-to-be), i.e. one who is content with nothing less than all-knowledge attained through the perfection of wisdom for the sake of all beings.
2. There is no such thing as a bodhisattva, or as all-knowledge, or as a 'being', or as the perfection of wisdom, or as an attainment. To accept both of these contradictory facts is to be perfect.'

Within this context of voidness, The Perfection of Wisdom offers a way to enlightenment. It represents the formal introduction to Buddhist thought of a practical ideal — the ideal of a bodhisattva. Unlike an arhat or pratyekabuddha, beings who achieve enlightenment but cannot pass on the means of enlightenment to others, a bodhisattva should and does teach. A bodhisattva must practice the six perfections: giving, morality, patience, vigor, contemplation and wisdom. Wisdom is the most important of these because it dispels the darkness of sensory delusion and allows things to be seen as they really are."
R.C. Jamieson: The Perfection of Wisdom (New York: Penguin Viking, 2000. ISBN 0-670-88934-2 pp. 8–9)

For example, the Diamond Sutra concludes with:
As stars, a fault of vision, a lamp,
A mock show, dew drops, or a bubble,
A dream, a lightning flash, or a cloud,
So should one view what is conditioned.

Stars cannot be grasped. Things seen with faulty vision do not really exist. Lamps only burn as long as they have fuel. A mock show is a magical illusion; it is not as it seems. Dew drops evaporate quickly in the heat of the sun. Bubbles are short lived and have no real substance to them. Dreams are not real, even though they may seem so at the time. Lightning is short lived and quickly over. Clouds are always changing shape. By realizing the transient nature of things, it is easier to detach from them and to attain Nirvana.