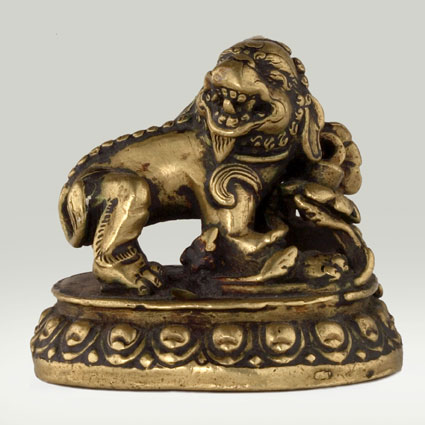 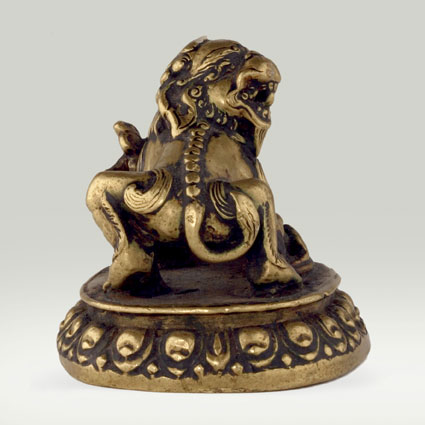 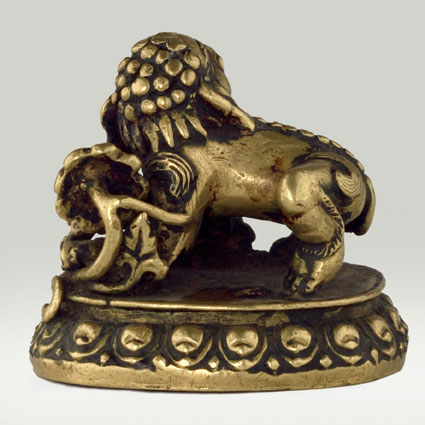 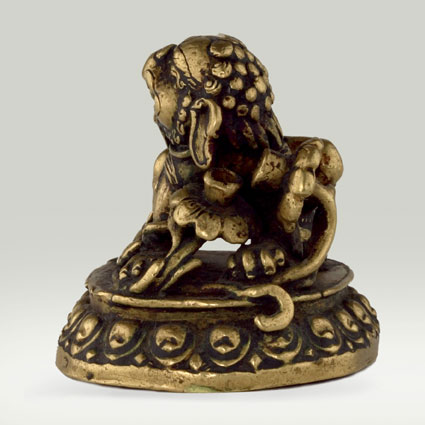 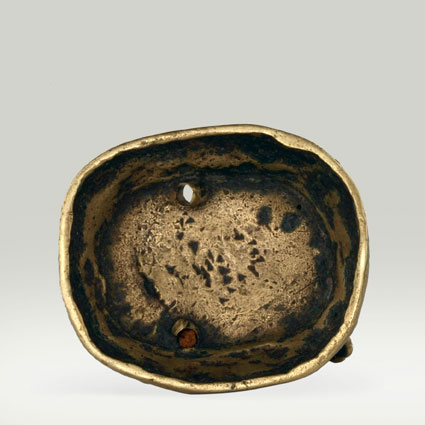 Iconography
Snow lionThe Snow lion (sometimes also Snowlion. Tibetan: Gangs Senge) is a celestial animal of Tibet. It symbolizes fearlessness, unconditional cheerfulness, east and the earth element. It is one of the Four Dignities. It ranges over the mountains and is commonly pictured as being white with a turquoise mane. In Mainland China, the Snow Lion is called a Fu Dog.The Snow Lion resides in the East and represents unconditional cheerfulness, a mind free of doubt, clear and precise. It has a beauty and dignity resulting from a body and mind that are synchronized. The Snow Lion has a youthful, vibrant energy of goodness and a natural sense of delight. Sometimes the throne of a Buddha is depicted with eight Snow Lions on it, in this case, they represent the 8 main Bodhisattva-disciples of Buddha Shakyamuni, the historical Buddha. Associations: main quality is fearlessness, dominance over mountains, and the earth element. RoarThe roar of the Snow Lion embodies the sound of 'emptiness' (Sanskrit: Sunyata), courage and truth, and because of this is often a synonym for the Buddhadharma, the Buddha’s teachings, as it implies freedom from karma and the challenging call to awakening. It was considered to be so powerful that just a single roar could cause seven dragons to fall from the sky. Two snow lions appear on the Flag of Tibet
Flag of Tibet between 1912 and 1950. This version was introduced by the 13th Dalai Lama in 1912. It sports two Snow Lions amongst other elements and still continues to be used by the Government of Tibet in Exile, but is outlawed in the People's Republic of China.
Snow Lioness MilkIn Tibetan folklore the milk of the Snow Lioness (Tibetan: Gangs Sengemo) contains special nutrients to heal the body and restore it to harmony. Some holy medicinal remedies are believed to contain the essence of Snow Lioness milk. Her milk is also used to symbolize the Dharma and it's purity, as Milarepa replies to a man seeking to buy the Dharma from him with expensive gifts:"I, the snow lioness who stays in snowy solitudes, Have milk which is like the essential nectar. In the absence of golden cups, I would not pour it in an ordinary vessel." The Snow Lion in Buddhist ArtThe Lion is a sacred and regal symbol in many ancient cultures from Egypt to the Greek and Roman Empires and further east to Persia and ultimately to Buddhist India in the second century. In Buddhism the Snow Lion is the protector of Buddha and in paintings and sculpture is usually seen as holding up the Buddha's throne (one on the left and one on the right of the throne). The body of the Snow Lion is white while its flowing hair of mane, tail and curls on legs, is either blue or green. While most Snow Lions are gender neutral in Buddhist art there are some that are represented as obviously male and some as obviously female. When represented as a symmetrical pair the male is on the left and the female on the right. Sculptural Snow Lions are often in repousse metal that has been gilt and painted. Tibetan Lion DogThe Shih Tzu is called the Tibetan Lion Dog after its resemblance to the Snow Lion, however it is unknown whether the dog was bred to resemble the Snow Lion or if the artistic design was influenced by the features of the dog. AttributesThe Snow Lion is an archetypal thoughtform confluence or personification of the primordial playfulness of “joy” and “bliss” (Sanskrit: ananda; Tibetan: dga' ), somewhat energetically comparable to the western unicorn, though without a horn. Though paradoxical, the Snow Lion does not fly but their feet never touch the ground; their existence is a playful “continuum” (Tibetan: rgyud) of leaping from mountain peak to mountain peak. The energetic potency (wisdom or shakti) of the Snow Lion is expressed in the attribute of the gankyil/gakyil (“bliss+whirling” or “wheel of joy”) that the Snow Lion keep in eternal play. The gankyil is a vriddhi derivation of the dragon's fiery “pearl of great price”. The gakyil is the principal polyvalent symbol and teaching tool of all the doctrinal trinities of Dzogchen and is the energetic signature of the trikaya. The gankyil is the inner wheel of the Dharmacakra of the Vajrayana Ashtamangala path of Buddhism.