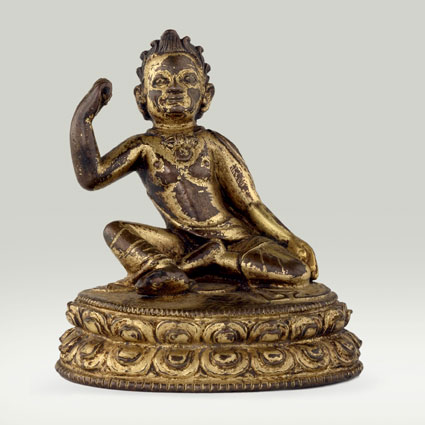 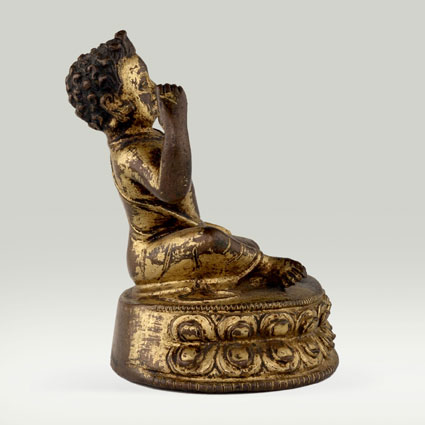 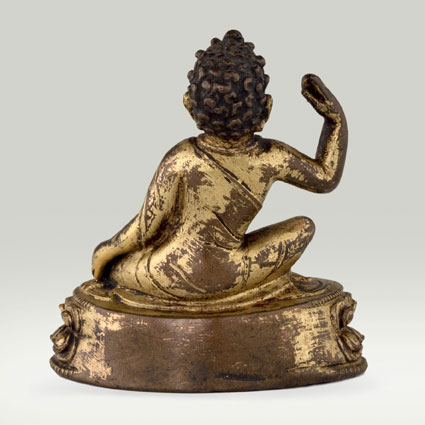 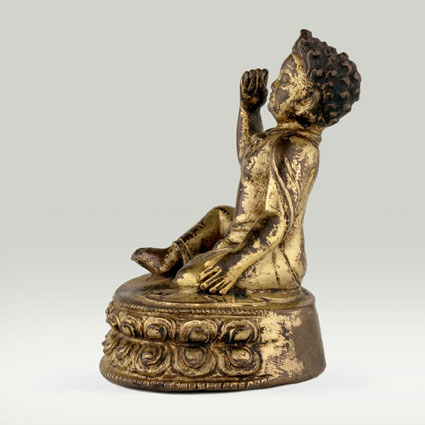 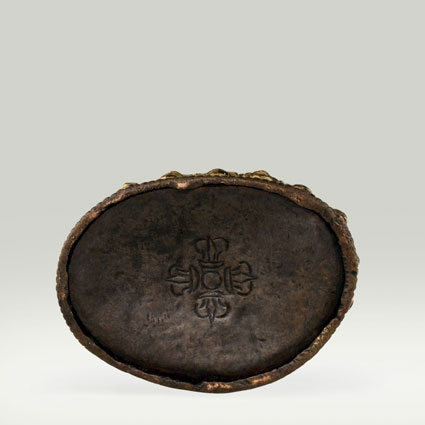 Description
Iconography
Gilt copper partly worn off; hollow cast in one piece.
The bottom of the lotus pedestal is not sealed.

The unidentified Mahasiddha with unruly hair is seated in the attitude of royal ease (rajalilasana) on a double lotus pedestal with beaded border. The right hand is lifted in a particular gesture, the meaning of which is not clear, while the left hand holds the left thigh. He is casually dress with a piece of cloth placed of the left shoulder and wears a necklace with an attached vajra pendant.
Mahasiddha
(From Wikipedia, the free encyclopedia)

Mahasiddha (Tib.: grub thob chen po) is a term for someone who embodies and cultivates the "siddhi of perfection". A siddha is an individual who, through the practice of sadhana, attains the realization of siddhis, psychic and spiritual abilities and powers. Mahasiddhas were practitioners of yoga and tantra, or tantrikas. Their historical influence throughout the Indian subcontinent and the Himalayas was vast and they reached mythic proportions as codified in their songs of realization and hagiographies, or namtars, many of which have been preserved in the Tibetan Buddhist canon. The Mahasiddhas are the founders of Vajrayana traditions and lineages such as Dzogchen and Mahamudra.

Robert Thurman explains the symbiotic relationship between Tantric Buddhist communities and the Buddhist universities such as Nalanda which flourished at the same time: « The Tantric communities of India in the latter half of the first Common Era millennium (and perhaps even earlier) were something like "Institutes of Advanced Studies" in relation to the great Buddhist monastic "Universities". They were research centers for highly cultivated, successfully graduated experts in various branches of Inner Science (adhyatmavidya), some of whom were still monastics and could move back and forth from university (vidyalaya) to "site" (patha), and many of whom had resigned vows of poverty, celibacy, and so forth, and were living in the classical Indian sannyāsin or sādhu style. I call them the "psychonauts" of the tradition, in parallel with our “astronauts”, the materialist scientist-adventurers whom we admire for their courageous explorations of the "outer space" which we consider the matrix of material reality. Inverse astronauts, the psychonauts voyaged deep into "inner space", encountering and conquering angels and demons in the depths of their subconscious minds. »

According to Ulrich von Schroeder, Tibet has different traditions relating to the mahasiddhas. Among these traditions, two were particularly popular, namely the Abhayadatta Sri list and the so-called Vajrasana list. The number of mahasiddhas varies between eighty-four and eighty-eight, and only about thirty-six of the names occur in both lists. In many instances more than one siddha with the same name exists, so it must be assumed that fewer than thirty siddhas of the two traditions actually relate to the same historical persons. In the days when the siddhas of the later Tibetan traditions flourished in India (i.e., between the 9th and 11th centuries), it was not uncommon for initiates to assume the names of famous adepts of the past. Sometimes a disciple would have the same name as his guru, while still other names were based on caste or tribe. In such a context the distinction between siddhas of the same name becomes blurred. The entire process of distinguishing between siddhas with the same name of different texts and lineages is therefore to large extent guesswork. The great variation in phonetic transcription of Indian words into Tibetan may partly be the result of various Tibetan dialects. In the process of copying the Tibetan transcriptions in later times, the spelling often became corrupted to such an extent that the recognition or reconstitution of the original names became all but impossible. Whatever the reasons might be, the Tibetan transcription of Indian names of mahasiddhas clearly becomes more and more corrupt as time passes.

Eighty-four Mahasiddhas
By convention there are eighty-four Mahasiddhas in both Hindu and Tibetan Buddhist traditions, with some overlap between the two lists. The number is congruent with the number of siddhi or occult powers held in the Indian Religions. In Tibetan Buddhist art they are often depicted together as a matched set in works such as thangka paintings where they may be used collectively as border decorations around a central figure.
Each Mahasiddha has come to be known for certain characteristics and teachings, which facilitates their pedagogical use. One of the most beloved Mahasiddhas is Virupa, who may be taken as the patron saint of the Sakyapa sect and instituted the Lamdré (Tibetan: lam 'bras) teachings. Virupa (alternate orthographies: Birwapa/Birupa) lived in 9th century India and was known for his great attainments.

Some of the methods and practices of the Mahasiddha were codified in Buddhist scriptures known as Tantras. Traditionally the ultimate source of these methods and practices is held to be the historical Buddha Shakyamuni, but often it is a transhistorical aspect of the Buddha or deity Vajradhara or Samantabhadra who reveals the Tantra in question directly to the Mahasiddha in a vision or whilst they dream or are in a trance. This form of the deity is known as a sambhogakaya manifestation. The sadhana of Dream Yoga as practiced in Dzogchen traditions such as the Kham, entered the Himalayan tantric tradition from the Mahasiddha, Ngagpa and Bonpo. Dream Yoga or "Milam" (Tib.:rmi-lam; Sanskrit: svapnadarsana), is one of the Six Yogas of Naropa.

Tibetan masters of various lineages are often referred to as mahasiddhas. Among them are Marpa, the Tibetan translator who brought Buddhist texts to Tibet, and Milarepa. In Buddhist iconography, Milarepa is often represented with his right hand cupped against his ear, to listen to the needs of all beings. Another interpretation of the imagery is that the teacher is engaged in a secret yogic exercise (e.g. see Lukhang). (Note: Marpa and Milarepa are not mahasiddhas in the historical sense, meaning they are not 2 of the 84 traditional mahasiddhas. However, this says nothing about their realization.) Lawapa the progenitor of Dream Yoga sadhana was a mahasiddha.