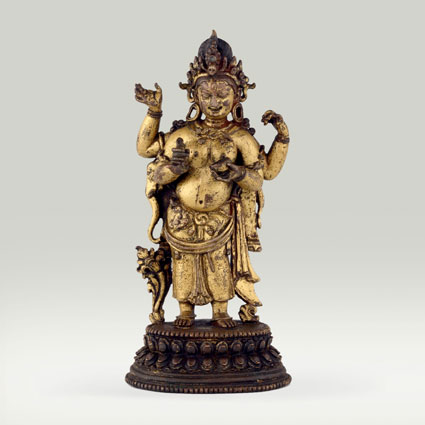 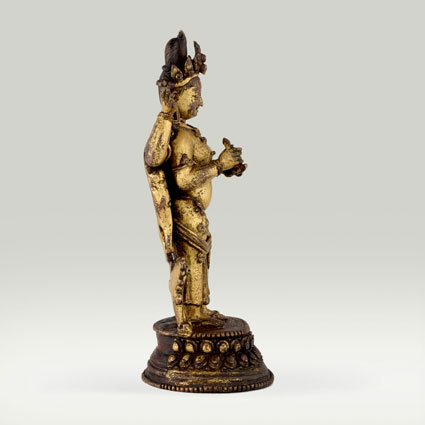 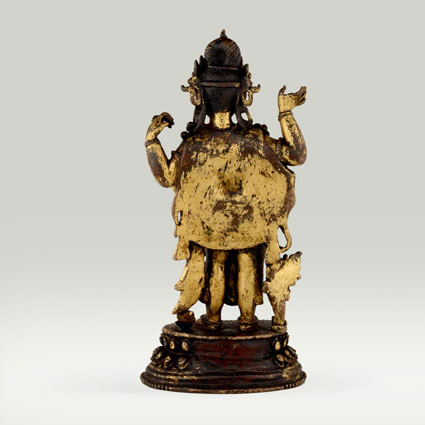 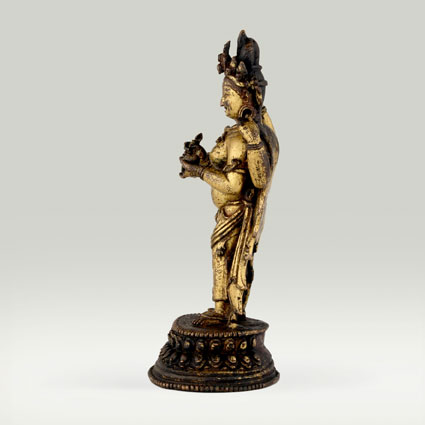 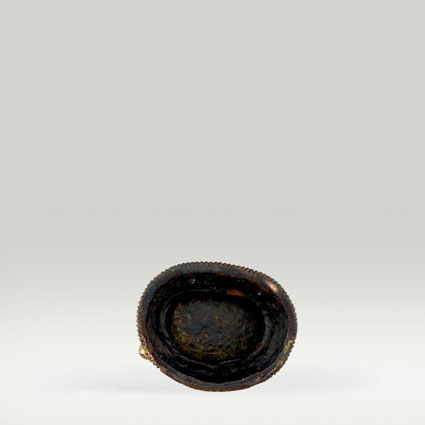 Description
Iconography
Cast in one piece, partly hollow.
The crown was originally inset with one precious stone.
The bottom of the pedestal is not sealed.

The four-armed and three-eyed figure represents the terrifying Brahmanical goddess Bhairavi (Tib. 'Jigs byed ma). She stands in a slightly bent attitude (abhanga) on an oval double lotus pedestal. The upper right hand is held upwards, while the attribute originally held in the upper left hand, possibly an elephant hook (ankusa), is lost. The lower right hand holds a ritual chopper with a vajra handle (vajrakartrika), the lower left a skull-cup (kapala).

The slightly pot-bellied goddess is clad in the skin of an animal - variously identified in the texts as that of a leopard, tiger, or lion - tied around the hips with a snake. The skin which of an elephant is fastened by two of its legs tied around the neck. Bhairavi is adorned with ornaments, bracelets on the upper arms and wrists, and anklets.
Bhairavi
Bhairavi is a fierce and terrifying aspect of the Goddess virtually indistinguishable from Kali, except for her particular identification as the consort of the Wrathful Shiva.

Symbolism
Bhairavi is also identified with Kalaratri, a name often associated with Kali that means “black night (of destruction)” and refers to a particularly destructive aspect of Kali. She is also identified with Mahapralaya, the great dissolution at the end of a cosmic cycle, during which all things, having been consumed with fire, are dissolved in the formless waters of procreation. She is the force that tends toward dissolution. This force, furthermore, which is actually Bhairavi herself, is present in each person as one gradually age, weakens and finally dies. Destruction is apparent everywhere, and therefore Bhairavi is present everywhere. she is also called as shubmkari, Good Mother to Good People and Terrible to bad ones. It’s believed that when Bhairavi entered the battle field the demons on her horrible appearance become weak and very feeble it is believed that most of the demons start panicking as soon as they see her. Bhairavi is seen mainly as Mahakali in Durga Saptashathi in version of slayering shumbha and Nishumbha. However, she kills and Drinks the blood of Chanda and Munda the Chieftains of asuras hence Goddesses Parvathi gives her boon as she would be called as CHAMUNDESHWARI. In other forms she is also called as parvathi or durga. When furious she is found sitting on faithful donkey with her mouth full of demons blood, her body covered with tiger skin and skeleton. She also shows abhaya mudra and vara mudhra also she possess weapons such as trident, axe, and thunderbolt i.e. the rib bones.

One of her dhyana mantras, that of Sampatprada-bhairavi, says that she is intoxicated with her youth, and most descriptions of her, despite her association with destruction, say that she is attractive, young, and shapely.
Bhairavi has facets and epithets that assert her cosmic importance, if not supremacy. A commentary on the Parashurama-kalpasutra says that the name Bhairavi is derived from the words bharana (to create), ramana (to protect), and vamana (to emit or disgorge). The commentator, that is, seeks to discern the inner meaning of Bhairavi’s name by identifying her with the cosmic functions of creation, maintenance, and destruction.


Bhairava
(From Wikipedia, the free encyclopedia)

Bhairava ("Terrible" or "Frightful"), sometimes known as Bhairo or Bhairon or Bhairadya, is the fierce manifestation of Shiva associated with annihilation. He is one of the most important deities of Nepal, sacred to Hindus and Buddhists alike. Bhairava is invoked in prayers to destroy enemies.
He is depicted ornamented with a range of twisted serpents, which serve as earrings, bracelets, anklets, and sacred thread (yajnopavita). He wears a tiger skin and a ritual apron composed of human bones. Bhairava has a dog as his divine vahana (vehicle).
Bhairava himself has eight manifestations: Kala Bhairava, Asitanga Bhairava, Samhara Bhairava, Ruru Bhairava, Krodha Bhairava, Kapala Bhairava, Rudra Bhirava and Unmatta Bhairava.

The origin of Bhairava can be traced to the conversation between Lord Brahma and Lord Vishnu recounted in "Shiv Maha-Purana" where Lord Vishnu asks Lord Brahma who is the supreme creator of the Universe. Arrogantly, Brahma tells Vishnu to worship him because he (Brahma) is the supreme creator. This angered Shiva who in reality is the creator of all. Shiva then incarnated in the form of Bhairava to punish Brahma. Bhairava beheaded one of Brahma's five heads and since then Brahma has only four heads. When depicted as Kala Bhairava, Bhairava is shown carrying the amputated head of Brahma. Cutting off Brahma's fifth head made him guilty of Brahmanicide, and as a result, he was forced to carry around the head for years until he had been absolved of the sin.

Another story of the origin of Bhairava is the tale of Sati, wife of Shiva. Sati, the daughter of the king of gods, Daksha, had chosen to marry Shiva. Her father disapproved the alliance because he perceived Shiva as an ascetic associated with animals and ghosts and a frugal lifestyle. Eventually, Daksha held a yagna (a ritualistic sacrifice) and invited all the gods, but not Sati and Shiva. Sati came to the yagna alone, where Daksha publicly spoke in a belittling manner about Shiva. Sati could not bear to hear her husband insulted and offered herself to the sacrificial pyre.
When Shiva learned of this, he destroyed the yagna and killed Daksha by beheading him. Shiva carried Sati's corpse on his shoulders and ran uncontrollably all around the world for days. Since this would eventually destroy all creation, Vishnu used his Sudarshan Chakra (divine discus) to cut Sati's body into pieces, which then fell all around. These spots where Sati's body parts fell are now known as Shakti Peethas. In the form of the frightful Bhairava, Shiva is said to be guarding each of these Shaktipeeths. Each Shaktipeeth temple is accompanied by a temple dedicated to Bhairava.

Bhairava is an important deity of Newars. All the traditional settlements of Newars have at least a temple of Bhairava. Most of the temples of Bhairava in Nepal are maintained by Newar priests. There are several Bhairava temples in the Kathmandu valley. Some of them are:
* The Kala Bhairava temple in Hanuman Dhoka (Durbar Square) has a 12-foot-high stone image of Kala Bhairava sculpted in the 17th century CE. It was believed that people die if they speak false in front of this sculpture. So, this temple served as the supreme court of Nepal for a long time.[citation needed]
* Akash Bhairava (Sava Bhakku Deva or Wanga Dya),
* Swet Bhairava,
* Shanta Bhairava (Majipa Lakhey Dya),
* Kirtimukha Bhairava,
* Unmukta Bhairava (inside the Pashupatinath temple)
* Bagh Bhairava temple of Kirtipur.