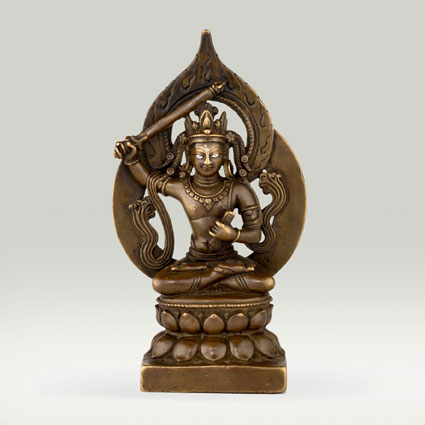 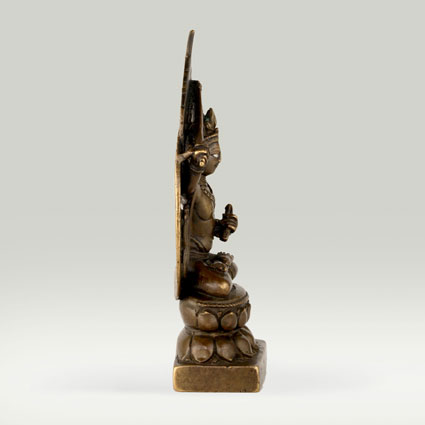 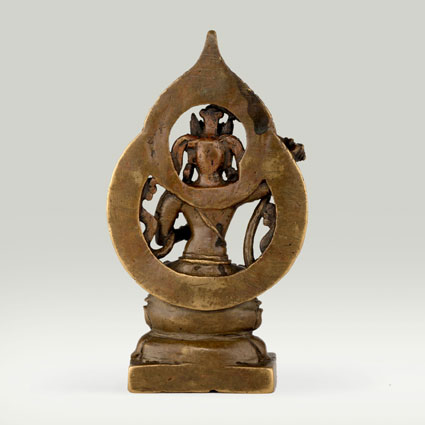 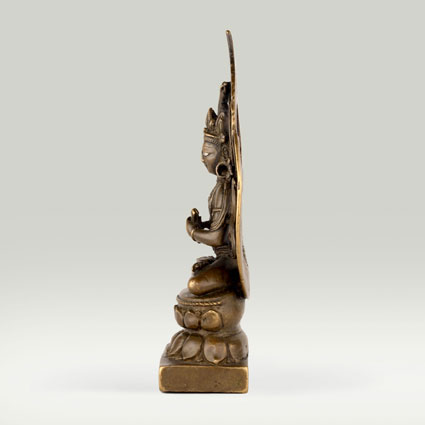 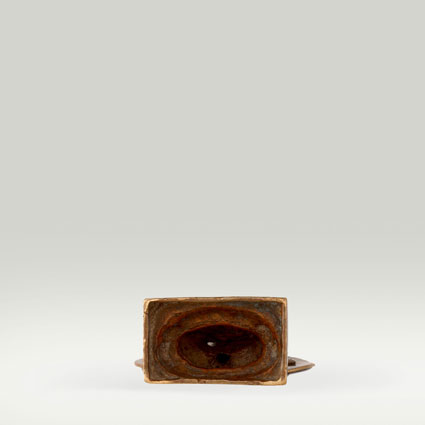 Sthiracakra, a form of Manjusri (Tib. 'Jam dpal), is characterized by the diamond attitude (vajraparyankasana) in which he is placed on an oval double lotus pedestal with a rectangular stand. In the raised right hand he holds his principal attribute, a sword (khadga). The left hand in front of the chest holds a manuscript (pustaka) of the Prajnaparamita Sutra. Manjusri is clad with a decorated cloth tied around the hips and secured with a beaded belt and over the shoulders he wears a veil with swirling ends. He also wears bejeweled ornaments, namely a three-pointed crown leaving long stands of his hair falling on both shoulders, a necklace with an attached pendant, the beaded sacred Thread (ratnapavita) and one pair of bracelets on the wrist. The image is encircled by an aureole (prabhamandala), the head is set off against a pointed nimbus decorated with rays.

The Sadhanamala (SM) contains eight sadhanasof Manjusri holding a sword (khadga) in the right hand and a manuscript (pustaka) of the Prajnaparamita Sutra (SM4 4, 45, 55, 56, 58, 65, 74, 80) in his left held in front of the chest or placed on a blue lily (nilotpala). The described forms of Manjusri are listed under different names: Sthiracakra (SM 44, 45); Girgariman (SM 44); Giram-isvara (SM 44); Vagisa (SM 44); Manjusri (SM 44,56, 58, 65, 80); Vagvibu (SM 44); Manjuvajra (SM 13); Arapacana (SM 45, 56, 58, 65, 80); Manjughosa (SM 74, 80); Giram-guru-manjuvara (SM 65); Manjunatha (SM 74); Vajratiksna (SM 74, 80); Prajnacakra (SM 80). In this study individual images of Manjusri holding a sword (khadga) and supporting a manuscript (pustaka) are labelled as Sthiracakra form of Manjusri shown in the diamond attitude (vajraparyankasana), as Prajnacakra form of Manjusri if shown in the noble attitude (sattvaparyankasana), or as Vajratiksna if the image appears to form part of sixteen Vajrabodhisattvas of a Mandala (NSP 19, 21; KS 2), or just as Manjusri if shown in other attitudes.
Manjusri: alternate name: Vajrananga Manjughosa
(From Wikipedia, the free encyclopedia)