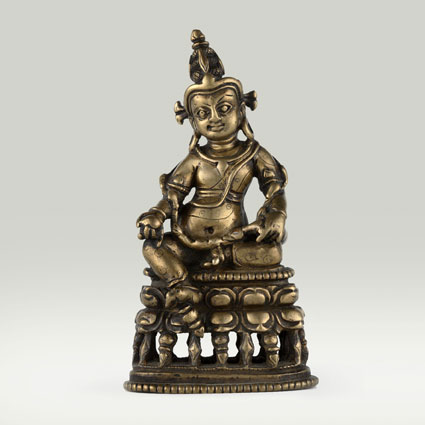 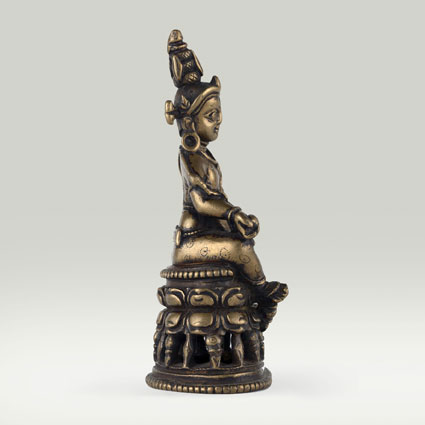 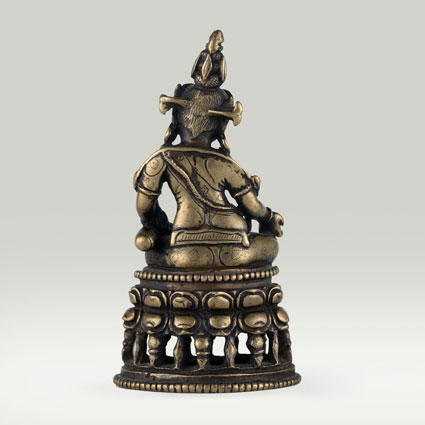 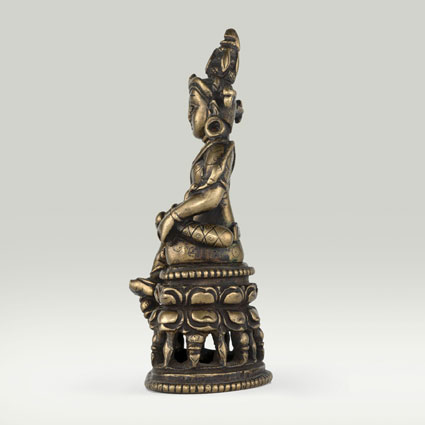 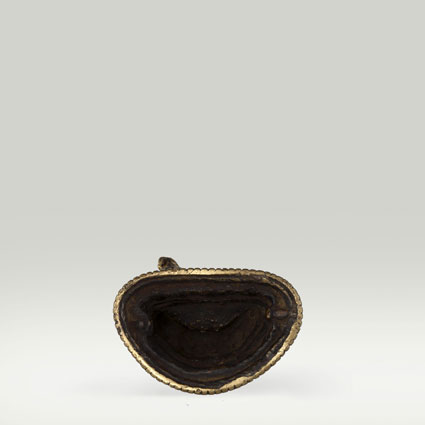 Description
Iconography
Hollow cast in one piece. The bottom of the pedestal is not sealed.

Jambhala, another name of Kubera, is seated in the attitude of ease (lalitasana)one a double lotus throne supported by an open worked stand. The right hand on the right knee, while the left hand holds a mongoose (nakula). The mongoose is the jewel-spewing attribute of Kubera, Jambhala, Vaisravana and other deities associated with the cult of prosperity.
Vaisravana, Kubera, Jambhala

Vaisravana (Sanskrit) or Vessavaṇa (Pali) is the name of the chief of the Four Heavenly Kings and an important figure in Buddhist mythology.

The name Vaisravana is derived from the Sankrit visravana "Great Fame".
Vaisravana is also known as Kubera (Sanskrit) or Kuvera (Pāli).
Other names include:
* Tibetan: rnam.thos.sras (Namthöse)

The character of Vaisravana is founded upon the Hindu deity Kubera, but although the Buddhist and Hindu deities share some characteristics and epithets, each of them has different functions and associated myths. Although brought into East Asia as a Buddhist deity, Vaisravana has become a character in folk religion and has acquired an identity that is partially independent of the Buddhist tradition (cf. the similar treatment of Kuan Yin and Yama).

Vaisravana is the guardian of the northern direction, and his home is in the northern quadrant of the topmost tier of the lower half of Mount Sumeru. He is the leader of all the yaksas who dwell on the Sumeru's slopes.

He is often portrayed with a yellow face. He carries an umbrella or parasol (chatra) as a symbol of his sovereignty. He is also sometimes displayed with a mongoose, often shown ejecting jewels from its mouth. The mongoose is the enemy of the snake, a symbol of greed or hatred; the ejection of jewels represents generosity.

In the Pali scriptures of the Theravada Buddhist tradition, Vaisravana is called Vessavana. Vessavaṇa is one of the Catummaharajano, or four Great Kings, each of whom rules over a specific direction. Vessavana's realm is the northern quadrant of the world, including the land of Uttarakuru. According to some suttas, he takes his name from a region there called Visana; he also has a city there called Alakamanda which is a byword for wealth. Vessavana governs the yakkhas – beings with a nature between 'fairy' and 'ogre'.

Vessavana's wife is named Bhunjati, and he has five daughters, Lata, Sajja, Pavara, Acchimati, and Suta. He has a nephew called Punnaka, a yakkha, husband of the naga woman Irandati. He has a chariot called Narivahana. His weapon was the gadavudha (Sanskrit: gadayudha), but he only used it before he became a follower of the Buddha.

Vessavaṇa has the name "Kuvera" from a name he had from a past life as a rich brahmin mill-owner, who gave all the produce of one of his seven mills to charity, and provided alms to the needy for 20,000 years. He was reborn in the Catummaharajika heaven as a reward for these good kammas.

As with all the Buddhist deities, Vessavaṇa is properly the name of an office (filled for life) rather than a permanent individual. Each Vessavaṇa is mortal, and when he dies, he will be replaced by a new Vessavaṇa. Like other beings of the Catummaharajika world, his lifespan is 90,000 years (other sources say nine million years). Vessavana has the authority to grant the yakkhas particular areas (e.g., a lake) to protect, and these are usually assigned at the beginning of a Vessavana's reign.

Bimbisara, King of Magadha, after his death was reborn as a yakkha called Janavasabha in the retinue of Vessavaṇa.

In the early years of Buddhism, Vessavaṇa was worshipped at trees dedicated to him as shrines. Some people appealed to him to grant them children.

In Japan, Bishamonten , or just Bishamon is thought of as an armor-clad god of warfare or warriors and a punisher of evildoers – a view that is at odds with the more pacific Buddhist king described above. Bishamon is portrayed holding a spear in one hand and a small pagoda in the other hand, the latter symbolizing the divine treasure house, whose contents he both guards and gives away. In Japanese folklore, he is one of the Japanese Seven Gods of Fortune.

Bishamon is also called Tamonten, meaning "listening to many teachings" because he is the guardian of the places where Buddha preaches. He lives half way down the side of Mount Sumeru.

In Tibet, Vaisravana is considered a worldly dharmapala or protector of the Dharma. He is also known as the King of the North. As guardian of the north, he is often depicted on temple murals outside the main door. He is also thought of as a god of wealth. As such, Vaisravana is sometimes portrayed carrying a citron, the fruit of the jambhara tree, a pun on another name of his, Jambhala (in Tibetan pronunciation Dzambala or Zambala). The fruit helps distinguish him iconically from depictions of Kuvera. He is sometimes represented as corpulent and covered with jewels. When shown seated, his right foot is generally pendant and supported by a lotus-flower on which is a conch shell. His mount is a snow lion.

Tibetan Buddhists consider Jambhala's sentiment regarding wealth to be providing freedom by way of bestowing prosperity, so that one may focus on the path or spirituality rather than on the materiality and temporality of that wealth.

This article is about the Hindu deity. For the Buddhist deity of the same name, see Vaisravana.

Kubera (also Kuvera or Kuber) is the king of the Yakshas and the lord of wealth in Hindu mythology. He is also known as Dhanapati, the lord of riches. He is one of the Guardians of the directions, representing the Uttara-disha, meaning north of 4 directions in Sanskrit.

Kubera is also the son of Sage Vishrava (hence he is also called Vaisravana) and in this respect, he is also the elder brother of the Lord of Lanka, Ravana. The banks of river Narmada is described as the birth place of Yaksha king Kubera (Vaisravana), where his father Visravas, who was a sage, lived. It is also a territory of Gandharvas. (Mahabharata: 3,89).

He is said to have performed austerities for a thousand years, in reward for which Brahma, the Creator, gave him immortality and made him god of wealth, guardian of all the treasures of the earth, the nidhi which he was to give out to whom they were destined.

When Brahma appointed him God of Riches, he gave him Lanka (Ceylon) as his capital, and presented him, according to the Mahabharata, with the vehicle pushpaka, which was of immense size and ‘moved at the owner’s will at marvellous speed’. When Ravana captured Lanka, Kubera moved to his city of Alaka, in the Himalaya and established his Yaksha Kingdom there.

Also, his house was believed to be the abode of adilakshmi, the goddess of wealth who pleased by his devotion give him immense wealth making him nideesha or the keeper of riches.

Kubera also credited money to Venkateshwara or Vishnu for his marriage with Padmavati. In remembrance of this, the reason devotees going to Tirupati donate money in Venkateshwara's Hundi so that he can pay back to Kubera. According to the Vishnupuran this process will go on till the end of Kali yuga.