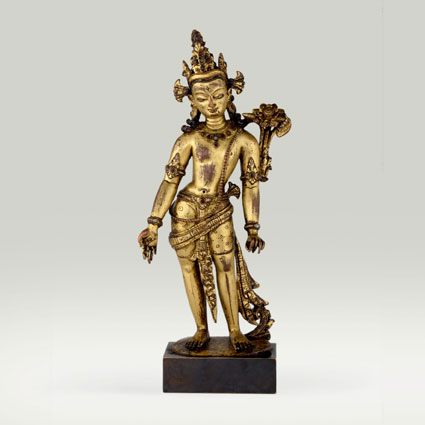 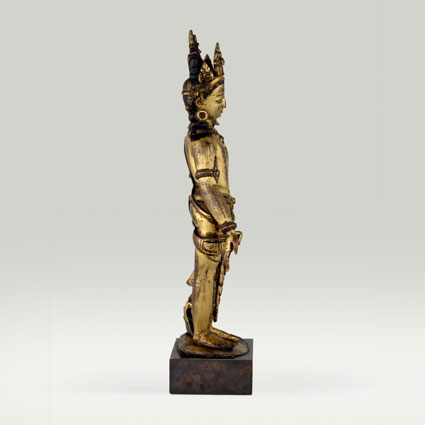 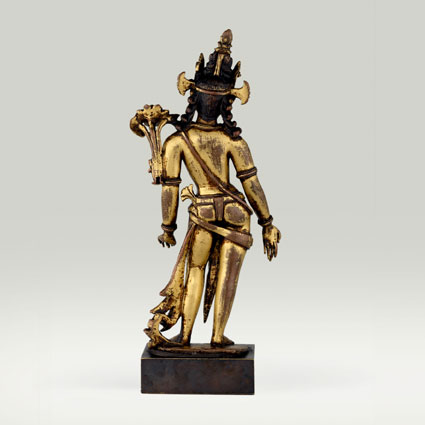 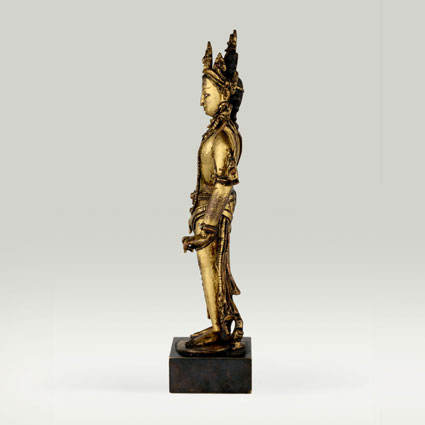 Cast in one piece, patly solid.
The garment is decorated with engraved linear and dotted textile patterns.
The jewelry, including the crown, is inset with precious stones and turquoise.

The Bodhisattva, identidfied as Avalokitesvara Padmapani (Tib. Phyag na Padmo) is standing in a slightly bent attitude (abhanga) on an oval stand. His right hand is extended in the gesture of charity (varada-mudra), and the left hand originally held the separately made stalk of the lotus (padma) blossoming at above the left shoulder. Avalokitesvara is clad with cloth (dhoti) tied around his waist with a belt with folds falling down between the legs, and wears a sash about the things with the ends hanging down at the side. He wears ornaments, namely a three fold crown, a pair of circular earrings, a necklace with attached pendants, the "investiture with the sacred thread" (upavita), and ornaments at the upper arms and wrist. No effigy of Amitabha is shown in the crown or the hair behind.

In correspondence with modern terminology, all Bodhisattva image with lotus (padma) attribute, with or without an effigy of Amitabha in the crown or the hair, are identified in this publication as Avalokitesvara Padmapani (Tib.Phyag na padmo). In traditional Indian Sanskrit literature, this deity is variously named Lokesvara (SM 280; NSP 26), Lokesa (SM 83), Avalokitesvara (NSP 2), or Lokanatha (SM 8, 18, 19, 419).
Avalokitesvara
(From Wikipedia, the free encyclopedia)