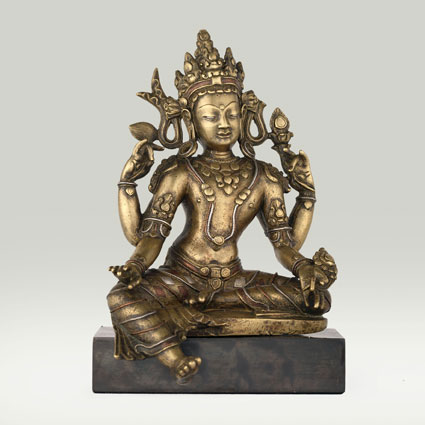 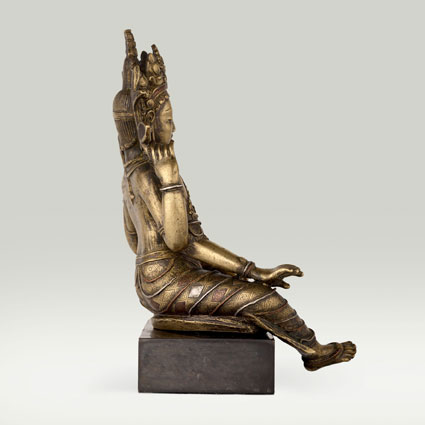 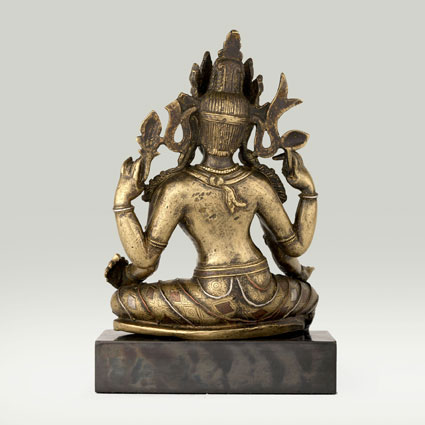 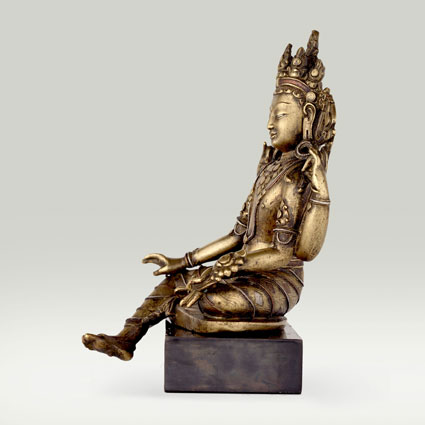 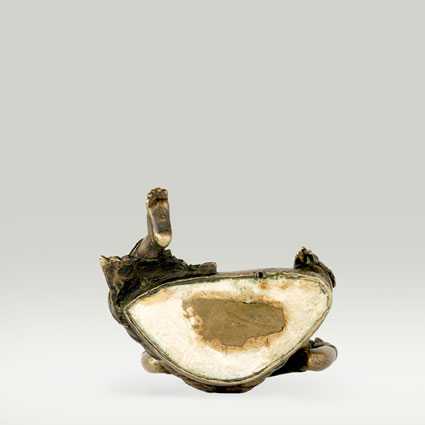 Description
Iconography
Hollow cast in one piece. The eyes, urna, lips, jewellery and garment are extensively inlaid with silver and copper.
The separately cast pedestal is lost.

This four-armed Bodhisattva is seated in seated in the attitude of ease with the right foot pendant (lalitasana). He rests the principal right hand on the right knee and holds in the upper right hand a fly-whisk (camara). The principal left hand displays the gesture of charity (varada mudra) and holds a lotus flower (padma ?) decorated with a “wish-granting jewel” (cintamani), and the upper left hand holds a lily (utpala) surmounted by a cintamani.

Our image possibly represents a form of one of the following three Bodhisattvas: Samantabhadra described in the MMK with fly-whisk (camara) and “wish-granting jewel” (cintamani) (MITB, 331); Ratnapani holding a “wish-granting jewel” (cintamani) and a moon on a lotus flower (MITB, 319); or Manidhara displaying with one hand thevarada-mudra and holding in one hand a lotus flower surmounted by a “wish-granting jewel” (cintamani) (MITB, 250). Off this three Bodhisattvas, only of Manidhara is described in the Sadhanamala (SM) a form with one head and four arms.
Samantabhadra
Samantabhadra (also known as Vajradhara and Visvabhadra (the different names foreground different attributes and essence-qualities), Wylie: Kun-tu bzang-po is the Lord of the Truth in Buddhism, who represents the practice and meditation of all Buddhas. Together with Shakyamuni and fellow disciple Manjusri he forms the Shakyamuni trinity in Mahayana buddhism. He is the patron of the Lotus Sutra and, according to the Avatamsaka Sutra, made the ten great vows which are the basis of a bodhisattva. Samantabhadra is most commonly described as a bodhisattva himself, although some esoteric traditions regard him as a primordial Buddha.


Literally “He whose bounty is omnipresent”, he represents the Buddhist ideals of Law and Compassion. Alongside Manjusri, he is one of the three acolytes of Shakyamuni. In Japan this bodhisattva is often worshipped by the Tendai and Shingon sects, and as the protector of the Lotus Sutra by the Nichiren sect.
Samantabhadra is looked upon in certain Tantric Buddhist sects (namely, the Kunjed Gyalpo Tantra, rNir-ma and Bön) as the "Primordial Buddha", awakened since the very beginning. Certain Yogacara sects claim that Samantabhadra, instead of Vairocana, is the founder of the Mahayana yoga system, and look upon him as a divinity of religious ecstasy. Those who practice ecstatic meditation in Japanese esoteric schools regard him as a special divinity central to their practice.

Iconography
Unlike his more popular counterpart Manjusri, Samantabhadra is only rarely depicted alone and is usually found in a trinity on the right side of Shakyamuni, mounted on a white elephant. In those traditions that accept the Avatamsaka Sutra as its root instruction, Samantabhadra and Manjusri flank Vairocana Buddha, the central Buddha of this particular sutra.
Known as Puxian in Chinese, he is sometimes shown in Chinese art with feminine characteristics, riding an elephant with six pairs of tusks while carrying a lotus leaf parasol, bearing similar dress and features to some feminine depictions of Kuan Yin. It is in this guise that Samantabhadra is revered as the patron bodhisattva of the monasteries associated with Mount Emei in western China.
Among those esoteric traditions that treat Samantabhadra as the Primordial Buddha, he is always represented naked, with a dark blue body, in union with his consort Samantabhadri.