Sarvabuddhadakini - the "Dakini of all Buddhas" 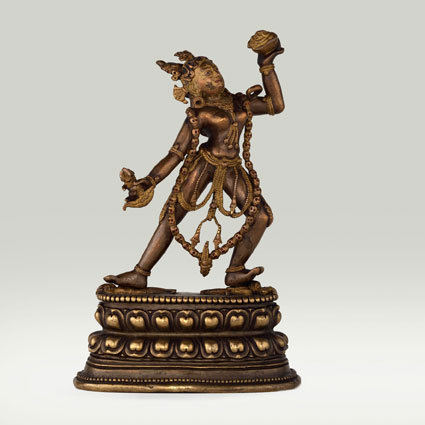 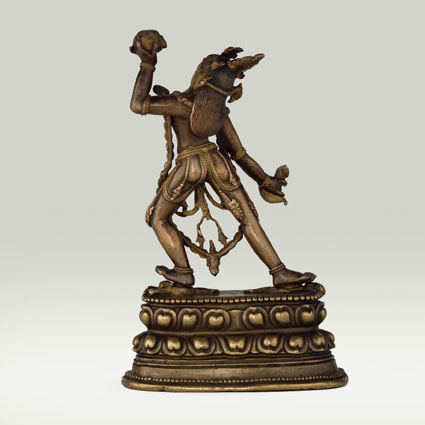 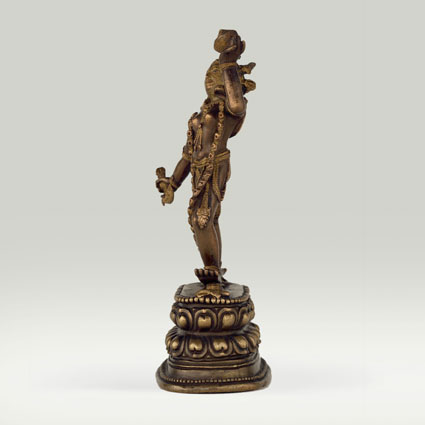 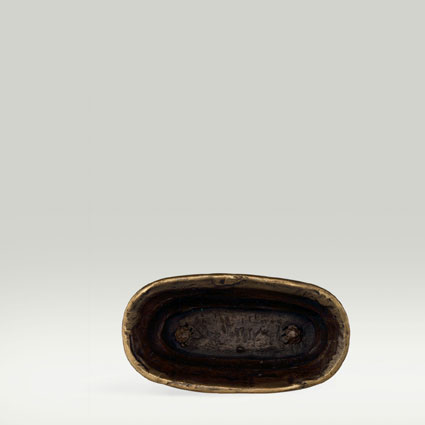 Description
Iconography
Cast in two parts: figure solid, pedestal hollow.
The face, the attributes, and the bone ornaments are painted with cold gold, and the hair has remains of a blue pigment.
The bottom of the pedestal is not sealed.

The three-eyed goddess, identified by the attributes and the posture as Sarvabuddhadakini (Tib. Na ro mkha’ spyod ma), is stepping to the left (alidhasana) on the two corpses of Bhairava and Kalaratri, laid on a double lotus pedestal with a prominent upper beaded border. The nude dakini is only sparsely covered with beaded bone ornaments and wears a garland of severed heads (mundamala). She wields with the right lowered hand a chopper with vajra handle (vajrakarttrka) and holds with the upheld left hand a skull-cup (kapala). The separately cast ceremonial staff (khatvanga), which was placed almost vertically on her left shoulder, is lost. Stylistically this image is part of the early Tibetan Pala revival tradition during the 13th century. The modelling of the pedestal as well as of the dakini clearly follow a Pala proto-type.

Sarvabuddhadakini, the “dakini of all Buddhas” is better known in Tibet as Na ro mkha’ spyod ma, or “dakini of Na ro [pa]”, because she was introduced in Tibet by the Indian Mahasiddha Naropa (956–1040). The goddess Sarvabuddhadakini is invoked in the sadhanasof Vajrayogini (Tib. rDo rje rnal ’byor ma) (SM 234, 236, 239) which appears to be just another name of Vajravarahi (Tib. rDo rje phag mo) (SM 217–222, 224–227, 250–251, 255).
Vajrayogini
Vajrayogini or Vajravarahi (Tibetan: Dorje Naljorma, English: the Vajra yogini; also Tibetan: Dorje Phagmo, Wylie: rdo-rje phag-mo, English: the Vajra Sow) is a dakini, a tantric Buddhist yidamwhose sadhana(practice) originated in India between the 10th and 12th century. She is often associated with triumph over ignorance as well as with abandonment (one of her hidden aspects is Varuni, Hinduist goddess of alcohol and intoxication). Vajrayogini is visualized as the translucent, deep red form of a 16 years old female with the third eye of wisdom set vertically on her forehead. She is often pictured with a sow and is an important deity for tantric initiation, especially for new initiates – Vajrayogini's practice is said to be well-suited to those with strong desirous attachment, and to those living in the current "degenerate age". Her consort is Chakrasamvara, who is often depicted as a spear on Vajrayogini's shoulder. Vajrayogini and her iconography are also closely associated with the Hindu goddess Chinnamasta.
Vajrayogini is the yidamthat a meditator identifies with when practicing Six yogas of Naropa
In Tibet the abbess of Samding monastery, on the shores of the Yamdrok Tso Lake near Gyantse, was traditionally a tulku of Dorje Phagmo. The current incarnation resides in Lhasa.